On Stack Exchanges, all users with 3,000 reputation or more can cast votes to close questions that they see as off-topic, or to reopen questions that they feel were wrongly closed. Ordinary users get a regular-strength close/reopen vote, 5 of which are necessary to close or reopen a question. In contrast, moderator close/reopen votes are an extra-strength variety, with just a single mod vote being sufficient to insta-close-or-reopen a question. All fine and dandy so far, as mods need to be able to nuke really-bad questions, or revive wrongly-closed ones, on occasion, but the mods don't have the ability to cast a normal-strength close/reopen vote in circumstances not requiring the use of the extra-strength vote.

Nearly eleven years ago, it was proposed to give mods the ability to "take off their mod hat" (so to speak) and cast a normal-strength close or reopen vote. The response was overwhelmingly "this is an amazing idea, why don't we have this already, this should be implemented ASAP" (lightly paraphrased), but it was unilaterally declined by @JeffAtwood in defiance of community consensus, claiming that mods should always use the bluntest instruments available to them (despite this [a] ignoring the fact that mods are users first and moderators second, and [b] being a clear violation of the principle of least privilege).

Since then, the ability for mods to cast a regular-strength close/reopen vote (or something with an even gentler touch) has been proposed again and again, as has a workaround to the problem,1 yet nothing has ever come of these proposals.

In this answer to a related question, @Shog9 made the argument that, for mods, (basically) the ability to insta-close or insta-reopen questions comes with a duty to use that ability whenever possible, just as an ordinary user uses their regular-strength close and reopen votes - despite the fact that a mod's insta-close or insta-reopen vote is a far blunter instrument than a regular close or reopen vote, and one never intended to be used except in extreme circumstances. Just because moderators are entrusted by the community with the use of such blunt instruments on the rare occasions that they are needed does not justify denying them the opportunity to use a lighter touch when the big hammer isn't called for. Their answer says

But potentially-close-or-reopen-worthy questions usually aren't black-and-white, and treating them as if they are invites wrongful closings and reopenings - anyone can make mistakes, even mods, and the requirement for 5 ordinary close/reopen votes serves as a defence against mistaken question closings/reopenings, a defence which is lost when mods are forced to use their black-and-white hammers on greyscale questions.

As such, I hereby (as suggested in a comment on one of the earlier requests) re-request that moderators be granted the ability to cast regular-strength close/reopen votes if they so choose, instead of being restricted to the extra-strength variety.

1: This workaround received serious consideration despite the fact that using it would require the mod to [a] create a second account for this purpose, and then [b] get that account all the way up to 3,000 reputation, before it would allow them to cast normal-strength close/reopen votes; this should serve as an indication of the strength of the need for mods to be able to cast normal-strength close/reopen votes.

There is no problem here to solve.

If you are unsure, don’t vote.

This applies to all close and reopen voting, regardless of how many votes it’ll take to get a post closed or reopened. It doesn’t matter if your vote is binding in this decision, you should never hide behind other voters. Because if everyone just voted with the herd as it were you’d get posts closed or reopened just because everyone just followed someone else’s lead.

If, as a moderator or a gold badge dupe hammer holder you are unsure or feel that the community needs to build some consensus, leave a comment expressing that thought. Then trust your community. If you are a member of your community as well as a moderator, then you are not essential in the process of voting for an individual post. There will be others that will vote, one way or another. Don’t take on this one post and leave it for others to vote on.

Close and reopen votes are also not a discussion. You can’t motivate your vote. Comments and meta posts and chats with other moderators or community members do let you motivate your opinion on a post, and let you form a decision one way or another. To me, this feature request sounds like you want to use a non-binding close or reopen vote to replace discussion.

When I was a new mod - this was the single scariest thing and the ability to make non binding closevotes is still something I'd feel useful. In some cases I'd rather defer to the community.

Interestingly as much as we need ways for mods to indicate something needs attention and to get an extra pair of eyes on something, it would be nice for us to hand over items of interest for community attention.

I'd suggest should this be considered - and that we should keep the default to be the closehammer, and the option to non bindingly close as an option, 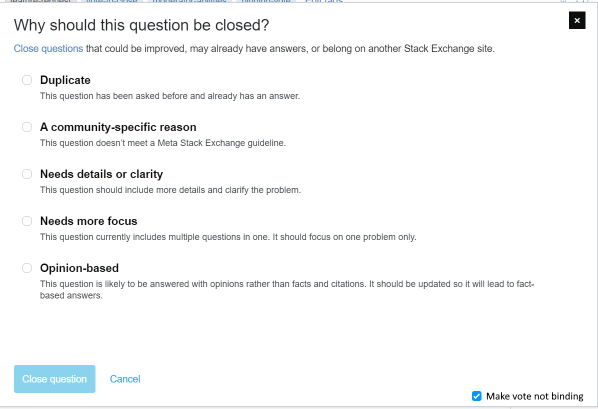 I'd also suggest considering 'extending' the feature request to duplicate closures in the same manner, where a gold-badge holder can choose not to unilaterally close

the requirement for 5 ordinary close/reopen votes serves as a defence against mistaken question closings/reopenings,

One of the first things you'll learn (hopefully before becoming a moderator): It's okay to make mistakes. And it's okay to own up to those mistakes, and as a moderator you have perfect power to undo your unilateral closing/reopening of a post, if it turns out you were mistaken. Hopefully, before someone becomes a moderator, they've been part of the community for long enough to know how things work: What should be closed, what shouldn't, and what to use in cases of doubt: Comments, chat, meta.

So there's little use for non-binding close votes as a defense mechanism against binding moderator votes, especially not if they're only optional. After all, a rogue mod isn't going to use optional non-binding votes.

As such, I hereby (as suggested in a comment on one of the earlier requests) re-request that moderators be granted the ability to cast regular-strength close/reopen votes if they so choose, instead of being restricted to the extra-strength variety.

A non-binding close vote seems like a bad idea to me. If only for the 'social' consequences it's likely to hold: People already come at you with accusations of bullying, being picked on, hostility, instead of improving their question. I don't want to add another layer of complaints/confusion to deal with on top of that, that of 'Why do you always close my blatantly off-topic troll posts unilaterally while you put a non-binding close vote on that other question that also ended up closed?'. Please spare us those discussions.

And I agree with the point raised in other answers: If you're not sure you should vote, don't vote. Again, you should've learned that before you became a moderator. Use other avenues (chat, comments, meta) to get some feedback, take some time to make up your mind. Perhaps in that time a few answers come in that confirm your hunch that this post is primarily opinion based. You can still use your binding vote then.

I think it would be better for moderators to have a tool to add a question they want the community to look at to a review queue rather than give them two types of votes. Wanting to put something in a queue for review is different from thinking it should be closed or should be reopened.

When I was a moderator I was not afraid to use my binding vote. There were times though when I wanted to let others handle it because I wanted to write an answer for a question, or the mod team had already been heavily involved, or I had some other reason to believe a mod acting unilaterally would cause unnecessary angst.

It would have been nice to be able to draw the community’s attention to a question without highlighting that it was a moderator asking for their attention.

Not the answer you're looking for? Browse other questions tagged feature-request vote-to-close moderator-abilities binding-vote .

390
Add a way for moderators to cast a normal, non binding close/open vote
124
Empowering tag-badge holders part II - let's look at silver?
110
Please remind me when I am wielding the dupe hammer
39
As a mod when should I vote to close content that is not flagged?
30
Outdated Answers project kicking off on Stack Overflow
14
May a diamond moderator utilize a second, non-diamond account e.g. to cast regular close votes?
17
Do moderators not have a way to just push a post into the close queue?
5
Allow mod to VOTE to close