Stack Overflow for Teams is now free for up to 50 users, forever

We know that sharing knowledge and async collaboration is critical to companies and teams of all sizes. We also know people need a good sized group and time to see the impact and value of a platform like Stack Overflow for Teams. Our previous 30 day free trial of our Basic tier wasn’t long enough. Now, Stack Overflow for Teams has a free tier for up to 50 users, forever.

If you aren’t familiar with Stack Overflow for Teams, it combines the best features of the Stack Overflow platform with features tailored for teams and companies who need a private knowledge sharing and collaboration platform such as Articles, Collections and integrations.

With Stack Overflow for Teams being a flexible platform, we’ve seen customers use it for a wide variety of use cases:

Below are the changes you can expect to see specific to Teams as well as across Stack Overflow and the network:

Creating a Team
Create a free Team by following this link, and invite your colleagues or a group of people you’re looking to collaborate with.

Moving my feedback from Discord to here:

From the homepage redesign announcement:

Something we spend a lot of time thinking about from our brand perspective is how Stack Exchange and Stack Overflow relate to each other - we wanted to be clear that although you’re on stackoverflow.com, there is a whole network of sites you can explore from here. We’re highlighting a few of the related technical focused Stack Exchanges which might be of interest to a visitor just discovering Stack Overflow.

I expect that this will lead to a drastic increase in activity on the Stack Mods Team. I know a lot of mods don't check it often because they don't really use SO, and so don't see notifications for new activity and simply forget that it exists. Personally, I'll also notice if there's activity on the Charcoal or SOBotics Teams - since I don't use Stack Overflow the site, I don't usually notice new activity on Teams at the moment.

As for the major announcement here - the fact that Teams is now permanently free for up to 50 users - that's also a very good sign for me, personally. It means that the company is stable enough financially to offer this, and historically it's when the company has been struggling financially that the community has had its major troubles. For instance, when we lost Pops in the '17 layoffs, the financial worries impacted stuff around the '19 dumpster fires, the "laying off" of Shog and Robert in January '20... and, of course, that the company didn't have the resources to invest in stuff like swag or... Community Managers. So if the company is looking financially stable enough to offer this, that's good news for everyone involved.

Great news! It's perhaps an idea to make this featured network-wide, because users are noticing the UI change but are still confused:

Can we get some clarity around whether the 50 user limit is total/historical users or only activated users? Consider a team of around 30 members that knows it won't be growing beyond 50; simple member churn over the years could push the total number of users over 50 even though there are never more than 30 or so actually using the team stack at one time.

Can we please know which sites, exactly?

The Salesforce icon now has the correct tooltip and alt text:

I'll mark this as status-completed when the "less distractions" is fixed (credit to mjr for the suggestion.)

I've found some bugs on the new logged-out page. First: 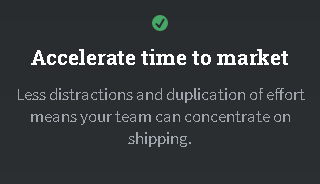 I would change that to "Fewer distractions" as it sounds and looks better. Second: 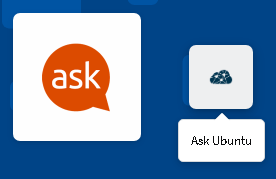 That tooltip is incorrect - it actually leads to Salesforce SE.

Extra scroll is visible on the left hand side bar. In MSE it is looking good, but a few sites have the extra scroll issue, such as Stack Overflow, Super User, Server Fault, Salesforce, and Code Golf.

A few screenshots for reference: 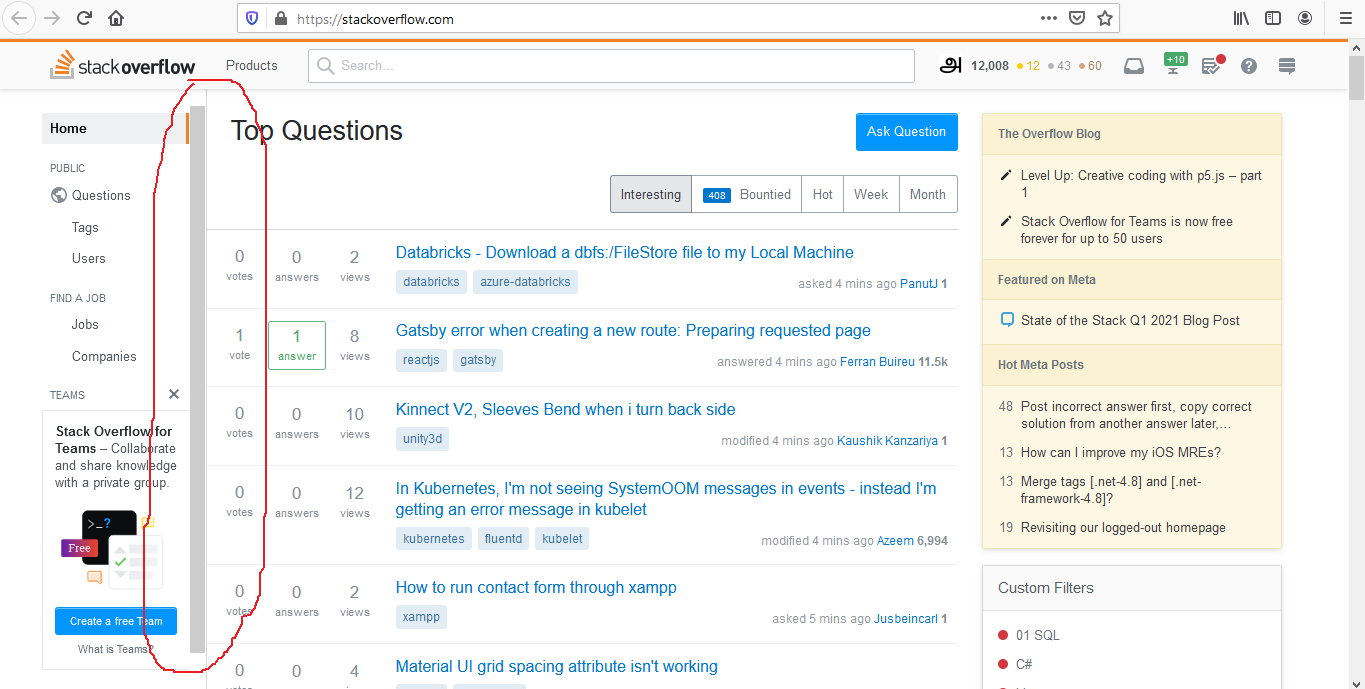 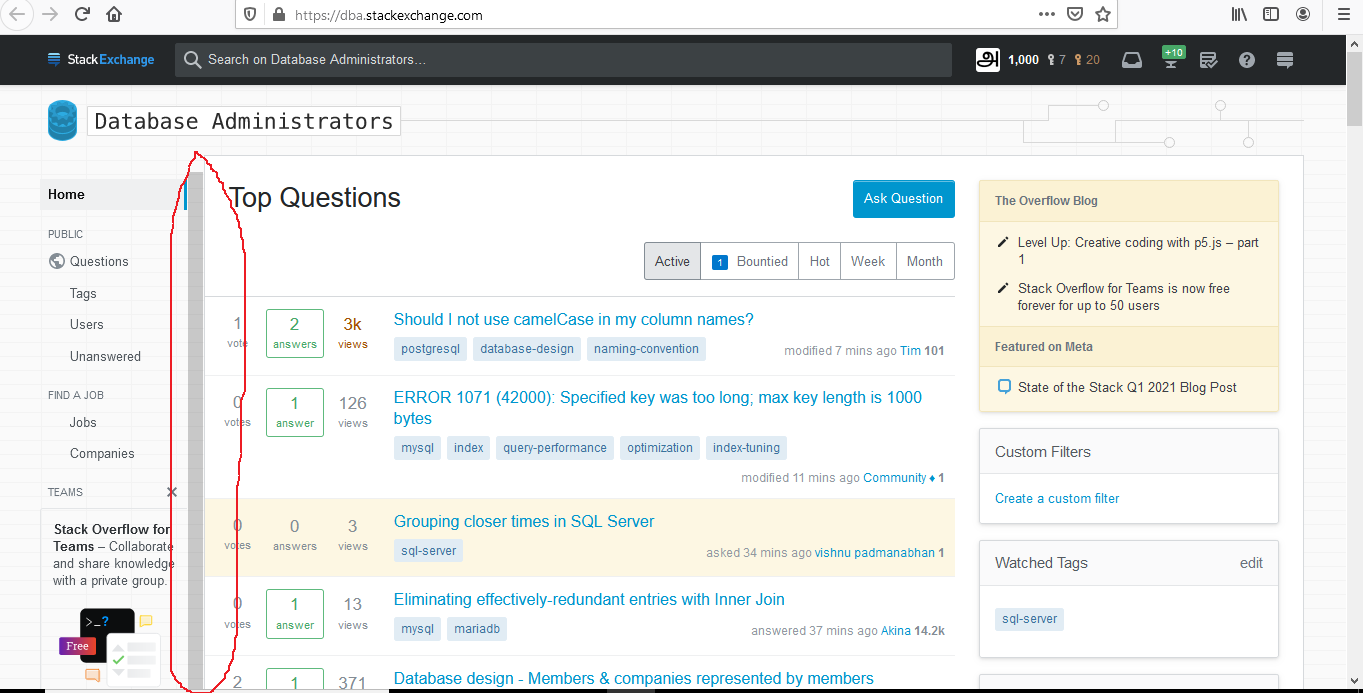 I am not part of any type of teams or Stack Overflow, yet I still see this on Writing SE:

Is there a way to turn off the little sidebar thing for navigation in settings for those of us who won't need it? (It just makes a bit more noise in my sidebar, which is unnecessary as I am not using or planning to use Teams.)

Could this be implemented if not already?

Anyway, thanks for the hard work!

I have two questions:

When I visit the Create free Team page, I see one of my old display names automatically filled in the form instead of my current one (or nothing at all). Why is that information still being used? 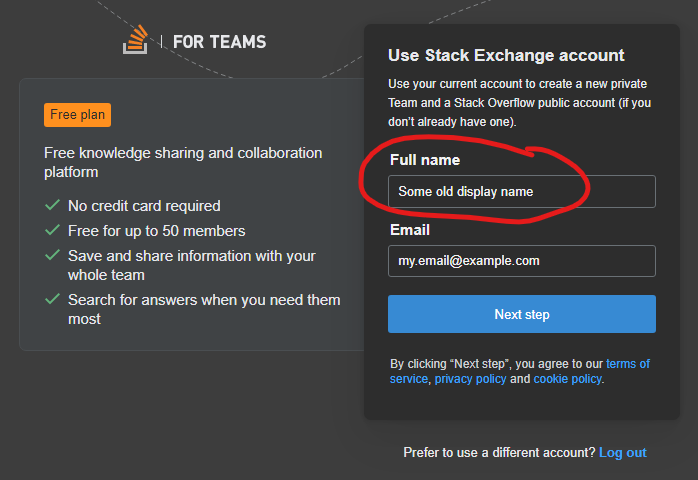 Can anyone else who has changed their display name at some point reproduce this?

I already posted this on Meta Stack Overflow. I'm moving it here since it's the announcement/feedback post.

As someone wanting to build a group of

people you can count with if the info you're sharing can't be make public in SE (be that for development, cities, etc) and are ok with being share in light of the terms of use and privacy policy of each team.

Some days ago contacted the support to clarify how many members could have on my teams without extra cost. That number was 10.

On my end, knowing it was only 10 lead to

which eventually slowed down the process given all other responsibilities I have. Thing is, for point 3. I'm sure there isn't any product out there which is as good as Stack for dealing with QAs and all needed actions related with it (duplicates, tags, upvotes, ...). Then, for point 2. (which would eventually come to that if the community grows for more than 50) I wouldn't feel good about charging for something that doesn't necessarily bring value (testing with 10 would've probably been ok too but this then linked with problem 1. of the policies).

Anyways, so I see this modification as an investment from your side in us! (which is very much appreciated)

I'm teaching a programming course this term so I decided to try setting up a teams group for my class, which has fewer than 50 students. I'm pleased overall with the results. Specifically it has the following advantages:

There were a few UX pain points, though:

Not the answer you're looking for? Browse other questions tagged discussion announcements company stack-overflow-for-teams .

40
Anyone is able to see ♦ moderator announcements
-431
We're testing advertisements across the network
9
Does "up to 50 users" in Stack Overflow Teams' free tier mean total users or active users?
4
Post about teams mentions minimize *this* prompt - what prompt, exactly?
2
Is it a good approach to report a bug with an answer to a similar question, rather than asking a new question?
5
Stack overflow for teams ad

2793
A Terms of Service update restricting companies that scrape your profile information without your permission
829
Net Neutrality and Stack Overflow / Stack Exchange
2510
Firing mods and forced relicensing: is Stack Exchange still interested in cooperating with the community?
2266
Stack Overflow is doing me ongoing harm; it's time to fix it!
987
Firing Community Managers: Stack Exchange is not interested in cooperating with the community, is it?
575
Change in roles for Jon Ericson (leaving SE)
554
The company’s commitment to rebuilding the relationship with you, our community
758
New Feature: Table Support
724
Stack Exchange Public Q&A access will not be restricted in Russia