Philippe Beaudette has been working in Community for 25 years. He’s spent some time with several great companies, including AOL, Wikipedia, Reddit, and Atlassian. He started at AOL, which in my opinion pioneered online community as a practice. Some of the first challenges they ran into there included figuring out how to do things that we now think are simple - things like banning and blocking users when they are paying to be part of your community. A big question was, once this happens, should they allow people to appeal a ban, and if so… how? Their initial answer was to write a letter that you snail-mailed to AOL’s HQ. During Philippe’s time, they moved this to a much more scalable online process. Legal challenges were also a big part of the job. Determining things like, “who do we report this problem to, how do we describe to them what happened and how to enforce the law? And what if they’re outside the US”? Section 230 came into law in 1996 and even interpreting that law was something totally new.

When I asked Philippe. “What about the AOL community would be a surprise to people that were a part of it.” His response was: “there were a lot of volunteers. We found them through referrals, through moderators of message boards. Much of the time when people thought they were dealing with staff, they were dealing with volunteer community leaders.” That dovetailed nicely into his future role, managing community at the Wikimedia Foundation, which supports (among others) Wikipedia.

AOL was very corporate, and Wikipedia was user-generated content that is given to the world. One of the things that people often ask about was the SOPA/PIPA shutdown. That was an impactful time in our community, and maybe one of the coolest, most formative events Philippe got to be a part of. After leading the Wikipedia community’s conversation about the blackout, he got to be a part of the site shutdown [video by Victorgrigas, CC BY-SA 3.0 https://creativecommons.org/licenses/by-sa/3.0, via Wikimedia Commons], and a lot of people were nervous about the potential consequences. It was one of the first times that Wikipedia was a part of a global conversation about law and the web. For those of us that remember this, it was a huge part of setting up the foundation of web freedoms we have and fight for today. His team also supported Wikimedia’s general counsel in their collaborative rewrite of their Terms of Use, which involved hundreds of community members. Their conversation about the Terms eventually ended up being longer than the novel “The Grapes of Wrath” (and much less interesting, he says).

At Wikipedia, one of the key projects Philippe worked on was building out support for their volunteers. They worked to listen to users and create a set of curation tools to support their work on the site. They collaborated with a newly formed product team to build tools to let people review and edit content submitted by new users prior to posting an article. Additionally, new editors had different user rights than more seasoned editors and tools specifically for new editors allowed them to onboard more gracefully.

Later, while Director of the Community team at Reddit he worked to involve their moderators early in community decisions around policy. He created a “standing offer” for moderators to set up time on his calendar to discuss whatever they wanted. It became the highlight of his time there. It helped him to understand the differences between the many communities at Reddit, the goals of the moderators, and how they work together and compliment each other. That program has been continued to this day.

Philippe hails from Tulsa, Oklahoma. (Home of my not-so-secret favorite band, Hanson) Also, Oklahoma is home to our very own Teresa, which they got to bond about when they met. Philippe lives with his partner and four Guinea pigs (two parents, two new babies). Philippe was a music major in college originally, he plays piano and organ and is deeply involved in his church music and live-streaming programs. 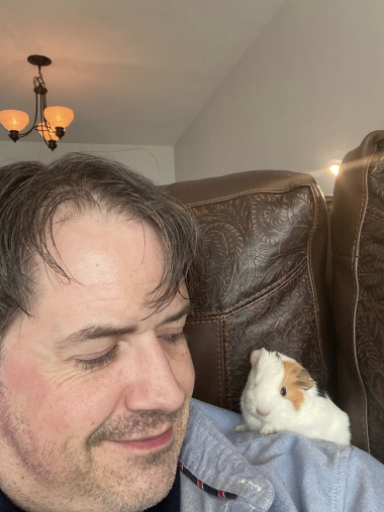 Philippe describes himself as a geek who likes to build things and take them apart. When he realized he needed to learn to better communicate with engineers at Wikipedia he set up his first LAMP stack so he could understand what they did. As a result, he continues to dabble in Linux. He loves to travel and has been to around 30 countries.

Philippe is joining us as part of our new Trust & Safety team. He’s looking forward to piloting that team with Cesar and getting to know our users to understand what makes them tick.

A very warm welcome to you and your human. It’s fantastic to see Stack Exchange being truly diverse in employing its first guinea pig.

May your hay always be dry and your wheel well oiled!

Welcome to the community, and good luck!

I fondly remember the days when AOL had their community Guide program. It was really groundbreaking at the time and relates to our theory and practices of moderation extremely well, better than most modern moderation systems.

What is the last thing you built and took apart?

What would be your first thing on the SE network you would like to build and take apart? (I assume you take things apart to get a better understanding of how they work, not the take things apart as toddlers seems to do, a.k.a. destroy beyond repair.)

This is really impressive. Knowing how to deal with the very difficult content and situations that might make other users and moderators falter is really important. Even more important is reaching the human on the other side of the computer (or in rare cases, the authorities) in very tense situations. Given that you created the emergency system Wikipedia uses in response to threats of physical harm, I have a lot of confidence that, in the face of such a rare event, you'll be able to provide very credible advice to your new coworkers.

I look forward to seeing you around!

Got a few questions for you, including:

I hope your stay at Stack Exchange it a good one!

That résumé is impressive!

Having a family of 4 guinea pigs including both parents and their 2 children, is so cool! I am also fond of your passion for music, traveling, building things, and taking things apart, since those are four of my favorite things! When travel restrictions relax, if you're able to visit Oxford, I'll invite you to play the big organ for us at the Hertford College chapel :)

Since everyone else is asking questions, here's mine!

As others have failed to do so, I would like to point out that SE also has a chat. While the details of the chat system may elude you for a while, with different sites using different chat servers, feel free to drop by on the Tavern on the Meta and say Hi.

Ps. Not that it matters much in writing, but how is your name pronounced? Is it more of a French or a Spanish pronunciation?

If you ever figure out what makes me tick, let me know, I will pass it on to my Doctor!

Not the answer you're looking for? Browse other questions tagged discussion announcements community-managers .

870
The Many Memes of Meta
207
Who is on the Community Management Team, and what does it do?
110
New VP of Community, plus two more community managers
21
Has a CM (specifically) gone back to being a mod before?
17
Are Philippe and Rosie doppelgängers?

1495
Fastest Gun in the West Problem
2793
A Terms of Service update restricting companies that scrape your profile information without your permission
302
Welcome Stack Overflow Valued Associate #599, Catherine Kuck AKA Catija!
2510
Firing mods and forced relicensing: is Stack Exchange still interested in cooperating with the community?
666
Monica's situation continues unresolved. Is SE hoping the problem just goes away?
2266
Stack Overflow is doing me ongoing harm; it's time to fix it!
986
Firing Community Managers: Stack Exchange is not interested in cooperating with the community, is it?
805
Thank you, Robert Cartaino
575
Change in roles for Jon Ericson (leaving SE)
110
New VP of Community, plus two more community managers