Is there any value in creating an app that will link SO and SF rep with LinkedIn profiles?

I was wandering around LinkedIn yesterday when I came across its "answers" area. It apparently has a service much like SO/SF, wherein people can ask questions and other "Subject Matter Experts" can answer them, thereby earning expert status by their answers being accepted as "the answer."

As you can see, this closely mimics what SO/SF does — to the point that I saw the same user post the same question there and on SF yesterday — so I was wondering if the people here would see any value in creating an app for LinkedIn's Applications section that would post a person's SO/SF rep score and a link to that person's profile (and, also, a link to the sites themselves?).

I think it would be a good way to not only garner recognition for individual users, the community, and the sites, but it may also help those users who are currently job hunting.

The problem is that LinkedIn only offers its API to "approved LinkedIn partners," so, and I may be wrong here, the request may have to come from SO/SF itself as opposed to enterprising users.

I for one would probably use such a LinkedIn app, and I guess it would pretty quickly get up to a few hundred or few thousand users. So in principle I don't think that's such a bad idea.

However, I have two doubts.

The problem lies in that LinkedIn only offers their API to "approved LinkedIn partners", so, and I may be wrong here, the request may have to come from SO/SF itself as opposed to enterprising users.

I think you are correct about this. Personally I'd guess that Jeff et al wouldn't be very interested at all in creating a LinkedIn app - they probably find there are way more urgent things to be working on in the SOFU sites themselves. So at the very least someone from Stackoverflow.com LLC would need to officially sanction the app, even if it was actually created by interested users.

More importantly, LinkedIn seems to be very selective about the 3rd party apps. I mean, look at their app directory - there are currently only ten (10) applications available.

Quote from their FAQ:

API access is only offered to approved LinkedIn partners. We partner with companies who provide clearly compelling value to our users, generally giving priority to integrations that provide the most value to the greatest number of LinkedIn users.

Reading that makes it pretty clear to me that they wouldn't want an app that's aimed at so small a portion of their users and does so little (show a rep score and provide a link is pretty minimalistic after all). So while there are lots of (technical) software and IT people on LinkedIn, in the bigger scheme of things they are a tiny minority there. Note that none of the current 3rd party apps are limited to some specific field or industry.

So, in conclusion, simply linking to your SOFU user page from your LinkedIn profile will probably remain the best / only option for some time. =)

Update (2014): For what it's worth, I recently started using the method described in this answer for highlighting Stack Overflow profile in the Summary section of my LinkedIn profile, using flair. Not perfect, but kinda ok. 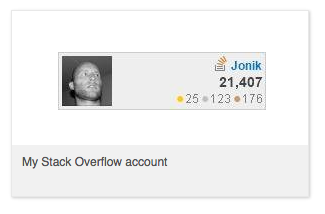 I think it's worth creating a LinkedIn application to show SO flair on your LinkedIn profile. Then you could show your SO rep as something that advertises your CV.

Scores? Maybe not immediately. But if your potential-employer digs into your score to find why you got it, yes. If he sees that you average 5 up-votes per answer on C#, that can be good. If he sees that you got popular for posting pictures of cats programming...probably not.

Would it not be possible to just do this yourself (as in anybody with a LinkedIn profile) by posting a link back to their profile, or if there is some HTML-capable area they could post their User Flair?

I am not real up on LinkedIn (haven't logged into it in a couple years) so I am cannot say what is possible and what is not.

Not the answer you're looking for? Browse other questions tagged discussion site-crossover linkedin social-networking .

261
How can I insert my Stack Overflow rating into LinkedIn?
115
Is it possible to show the Stack Exchange flair on LinkedIn?
6
Is there a LinkedIn application for Stack Overflow?

4
Helping to delete question where own answer gained >= X votes
326
Stack Overflow is getting a Meta of its own
2783
A Terms of Service update restricting companies that scrape your profile information without your permission
333
Brace yourselves: The GDPR is coming!
2468
Firing mods and forced relicensing: is Stack Exchange still interested in cooperating with the community?
310
A Pronominal Proposal
223
Creative Commons Licensing UI and Data Updates
186
Opt-in alpha test for a new Stacks editor