Is there a way to prevent a word with a hyphen from being split when wrapped?

If I write a word that itself contains a hyphen, and it happens to be near the end of a line, then it will get split at the hyphen during word wrapping.

But sometimes this has undesirable (to me, anyways) results. For example, in a recent post I made, I typed this:

If "7085-85-0" was actually a word, it'd probably make sense, but it's a numeric identifier whose format contains hyphens, so it's a little awkward to split it. Plus, only one character ended up on the next line.

Is there some way (or hack) to prevent certain words from being split, when that word contains a hyphen? I.e. to have it be treated like a non-hyphenated word?

Or copy it as char:

Here is the Windows Character map tool to find and select that character: 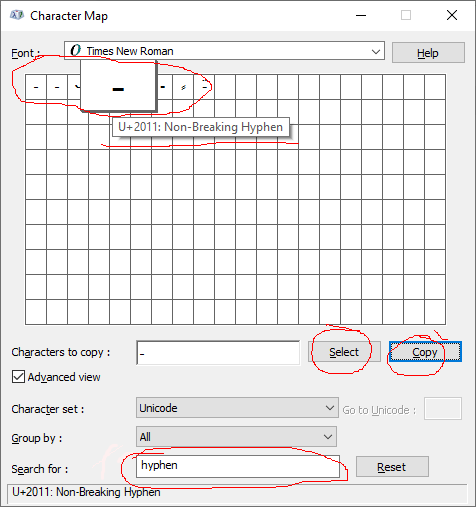 Find it on Windows 10 via the Search: "Character" should do the trick

From this answer, looks like you can use a word joiner character  immediately before and after the dash. So in markdown it would look like this:

Not the answer you're looking for? Browse other questions tagged support markdown .