The tooltips on all sites, including Meta sites, currently read as follows:

This does not fully represent how voting works on meta sites, which leads to confusion and frustration among new users unfamiliar with Meta voting culture when they receive downvotes.

This was originally proposed (and declined) a bit over 10 years ago and has come up again every so often since then.

Per Can we re-request features that were declined a sufficient while ago?, I'd like to revisit this, for a few reasons.

First and foremost, it's clearly a well-received request: the proposal itself is at +197, the answer agreeing is at +126, and Jeff's answer declining it is currently at -56 (making it the 17th most downvoted MSE answer of all time).

Second, the meaning of votes on Meta sites has become pretty well established among regulars: agreement/disagreement with feature requests, bug reports, and the premise of discussions.

Finally, the Stack Exchange network is much larger than it was 10 years ago: expecting people to know that the tooltip on the downvote button is a bit misleading and to look somewhere else for the full explanation just doesn't scale. It's an extremely common occurrence to see posters comment asking, to quote an example from a recent poster from Meta.SO, why downvoters are "classifying this question as not showing 'any research effort,' being 'unclear' and/or 'not useful'."

As far as the actual text of the tooltip, I'd suggest something a bit broader than the simple "I agree"/"I disagree" that was proposed in the original request. I do agree with Jeff that that would be too limiting. I would suggest something along the lines of "This question is unclear, not useful, or I disagree with what it suggests" for the question downvote tooltip.

I don’t think there is a tooltip that would apply to every sort of post on a site’s meta.

Sometimes I upvote questions on metas because I think the discussion is a valuable discussion to have even though I disagree with what is expressed in the post. Sometimes I downvote a post on a meta because it is a rant and not constructive even if I sort of agree with the underlying issue.

No tooltip wording is going to solve the underlying problem, which is that the mechanisms that work well on the main site are often ill-suited for the discussions on meta sites. It would be better to remove the tooltips entirely than to argue about how to twiddle the wording of them. Anyone using a touch device won’t see those tooltips anyhow, so education about how meta sites work is still the better (although annoying because of the recurring nature) option.

Another option would be separating proposals that are asking for community feedback from discussions, similar to the way moderator election questionnaires have been reworked so we’re not shoehorning them into a format that was difficult to make work for that purpose. Making proposals more formal might not only solve the “what does a downvote mean” issue, but could also enforce a “proposal/option to vote on/discussion” type structure.

I think that down-votes are more important as they can give the users asking the question the opportunity to work on their question to make it more suitable for an answer. It could also indicate that this is not the right place to ask this type of question.

I can imagine that down vote list could be dynamic, site specific or even generated based on tags used in the question. This proposal not meant to define a one and only possible solution. It is only a presentation of a concept.

Stack moderators could contribute in accepting or modifying list of available down-vote buttons. Users could collaborate and make a proposal to add or change available options. 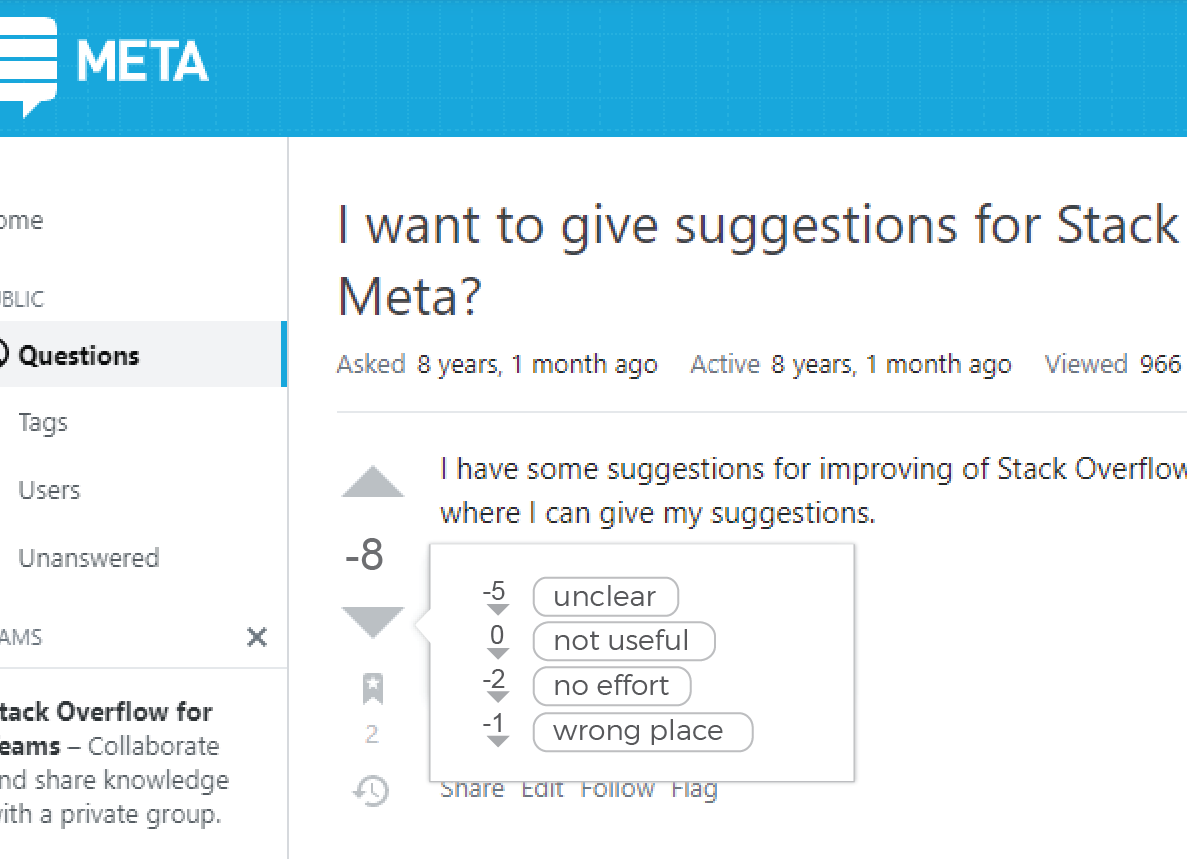 This approach gives the person asking the question much better feedback on how he/she can improve the question or if he/she should continue to try to find the answer on this particular site.

This solution would also give better guidelines on when the down-vote should be used and when a short comment describing the issue with the question would be more appropriate. At the same time this do not force anyone to comment when down voting a question. Down vote would become self descriptive so in many cases the comment would not be necessary. In most cases users not to care to live a comment anyway when down-voting. This approach could solve this issue.

Constructive and clear criticism should be always welcome. Informative criticism will allow improvement.

Not the answer you're looking for? Browse other questions tagged feature-request voting down-votes meta tooltips .

201
Change upvote/downvote tooltip on meta sites
64
Can we re-request features that were declined a sufficient while ago?
58
Why isn't providing feedback mandatory on downvotes, and why are ideas suggesting such negatively received?
-2
Change the meaning of downvotes on meta, or make it more apparent to new users that they mean something different?
-1
Change misleading tooltip for feature request questions
6
Down/up vote tooltips should speak differently on meta
6
Change the tooltip for voting buttons on meta
4
Wording of upvote/downvote tooltips and FAQ on Meta sites
2
Voting arrow descriptors indicate agreement/disagreement for meta feature requests?
2
Modify voting button alt text on Meta sites
See more linked questions