Can we have more options for low-quality reviews? 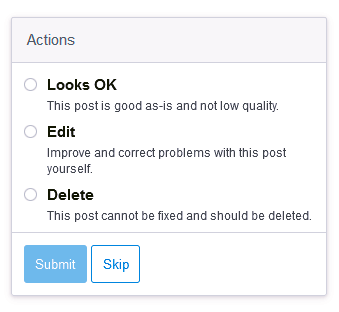 This post is motivated in part by a post I made on a site's meta, Why is this clearly wrong answer "Looks OK"?

When an answer is wrong, and the consensus is not to delete because it is an answer, the "Looks OK" option, and its description, "This post is good as-is and not low quality", are most of the time way off.

Can we have more options for low-quality reviews? Something like:

I understand a custom flag can be raised to ask the mods for a citation needed banner, but given the volume of Looks OK but definitely not Looks OK, can this be delegated to the reviewing community? And if it accumulates say two such votes, the banner would be added, and the post would be sent back to the queue say a week later:

◯ Delete
No improvement was made.

I also understand that on some sites such as those that deal with programming, that visible wrong answers have value, as a heads-up to not do that – so maybe that feature can be site-elective.

I understand changes are hard and costly; perhaps there's something I've missed. This request is mostly motivated by Stack Exchange's aim for less-noise.

I do think you missed a step or two and I don't think an option for 'lack of citations' in the review queue is going to fix the issue(s) you describe here.

While I agree the first one isn't a very intuitive option for posts where a downvote + comment are the way to go, the second point requires the site to have a policy of deleting answers that lack citations. Not every site has that, I think there are in fact very few sites that actually do this. Which would mean that the second round of review you're proposing (after adding the 'citation needed' post notice) would still end up with a verdict that recommends the post stay on the site, as long as the site it's on doesn't have a policy of deleting posts that lack citations.

When a site already has decided posts without citations should be deleted, people can choose the 'delete' option when reviewing, and voting to delete an answer because it lacks citations could be an option shown in the dialog after you press 'delete'. Again though, without a site policy that recommends answers without citations are deleted, having such an option in the review queue won't magically give you a tool to get 'wrong' answers deleted.

Of the sites I know that delete answers that lack citations, it doesn't matter if the answer is right or wrong: It's the lack of citations that makes those answers eligible for deletion.

Even with citations, you can still come to a 'wrong' answer, see e.g. anti-vaxxers and that 'vaccines cause autism' article they often cite. "Wrong" citations, referring to outdated, fraudulent or misinterpreted research will still result in "wrong" answers, and there's still nothing you can do but press 'Looks OK' in the review queues when the citations are there.

On the other hand, 'correct' answers can also lack citations, making their quality too low for a site, and making those answers eligible for deletion. This is mainly a 'problem' on sites where an answer that doesn't cite research or personal experience can still sound 'correct' or like 'common sense', but it actually is nothing more than an opinion instead of an answer sharing expertise. You can get massive amounts of upvotes for expressing a popular opinion, especially on HNQ.

I agree that 'Looks OK' isn't a very intuitive option for posts where a downvote + comment are the way to go. But rephrasing 'Look OK, this post is good as-is and not low quality' to 'Don't Delete, this post should not be deleted' would be a more accurate solution to your original problem (a wrong answer in the review queue) than adding an option to delete those kinds of posts for not having citations.

As to first adding a 'needs citation' post notice to those answers that are elegible for deletion because of lack of citations, or immediately allow people to vote to delete, I'm leaning towards just immediately voting to delete: It hides stuff that isn't suitable for the site as soon as possible, and if people do edit, the post can be undeleted again. Additionally, having a post go through review twice, requiring more people to vote on it (first to get it a banner, then to get it deleted) is just creating more work.

Not the answer you're looking for? Browse other questions tagged discussion feature-request review low-quality-posts .

728
Your answer is in another castle: when is an answer not an answer?
36
Rename "Looks Good" or add a "Looks OK, just Incorrect" in Low Quality Question Review
6
Insufficient options in the low-quality review queue

1226
Encouraging people to explain downvotes
1495
Fastest Gun in the West Problem
394
The robo-approvers are killing my will to review edits
728
Your answer is in another castle: when is an answer not an answer?
829
Net Neutrality and Stack Overflow / Stack Exchange
2507
Firing mods and forced relicensing: is Stack Exchange still interested in cooperating with the community?
2258
Stack Overflow is doing me ongoing harm; it's time to fix it!
488
To reach out: on Monica, the Lavender community, and the future of the Stack Exchange network
554
The company’s commitment to rebuilding the relationship with you, our community