Notify new users of close votes, explain what that means, and recommend next steps

Recently a new user asked an opinion-based question on Sustainability.SE, and promptly received two close votes and a downvote. As a moderator there, I agree that this opinion-based question, as written, should be closed. However -- there's a nugget of a good question in there. This user has been back to the site since those votes were cast (based on "last seen" in their profile), but unless they are paying close attention, they wouldn't see those close votes. I provided some feedback, but only because I noticed the question.

With help from @tinkeringbell and @terdon, I did a bit of a science experiment. First, what does a user see when their question gets a close vote? The answer is nothing, unless they're looking for it:

A user can click the "Close (1)" indicator on their own question to see which close reasons were provided, but this is not intuitive, and new users wouldn't have access to cast close votes anywhere else, so they might not know that this is even for. The resulting screen is also inscrutable for a new user -- you'd have to know that the boxed number indicates votes per close reason, or mouse over the number to see the tooltip -- otherwise it just looks like a way to close your own question: 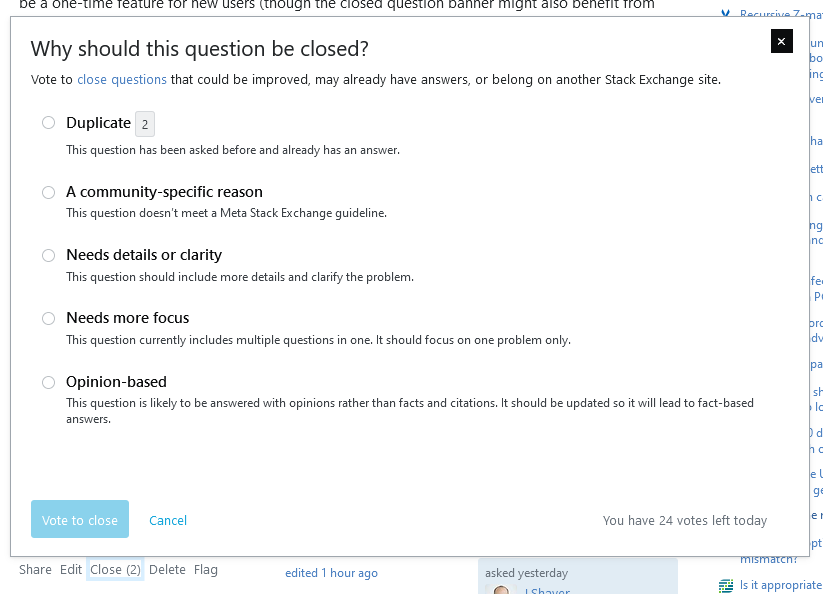 Even if a new user got this far, as others have pointed out, Close reasons are a poor way to give advice on how to improve a post.

Once the question is closed, there is some (succinct) guidance:

However, even this doesn't do much to explain what it means for a question to be closed, why it might be happening, and what the user can do.

Upon receiving a close vote, new users should be provided with some information about what this means, and what they can do.

First, provide some context about what it means for a question to be closed, a unique feature of Stack Exchange that new users may not be familiar with. This could possibly just be a link to the help center page What does it mean if a question is "closed"?. The topics page or the "don't ask" page could also be linked.

The format could be a notification on screen, similar to the review queue on-boarding -- this would be a one-time feature for new users (though the closed question banner might also benefit from some of this additional detail).

Similar to the tour, there could also be value in each site providing an example of a question that was closed, edited, and then re-opened.

Why not wait until the question is actually closed?

I've seen this idea "floating around" the meta sites.

The first subtlety is the Help Center doesn't (and perhaps can't) explain all the possible close reasons in-depth.

DO NOT use images of code. Copy the actual text from your code editor, paste it into the question, then format it as code. This helps others more easily read and test your code.

The problem is the complete rational behind this one sentence is rather extensive...So it begs the questions:

What could be even more instructive would be a link to the edit history of a re-opened question -- an example of a question with that close reason that was edited and reopened.

Upon receiving a close vote, new users should be provided with some information about what this means, and what they should do.

By the time a question has five (or three) close votes, there are likely to be many downvotes.

Perhaps we can modify the help centre to include links to FAQ posts. In that way the info in the help centre can be succinct, making it easier to find exactly what part you need

Not the answer you're looking for? Browse other questions tagged feature-request status-review vote-to-close new-users .

853
Allow an edit to notify downvoters: "I think I've fixed the issue now - please check"
79
New onboarding for review queues
189
Testing three-vote close and reopen on 13 network sites
90
Introducing a brand new, consolidated, Help Center
187
Can we clarify to the OP that their question is not yet closed and the duplicates are only suggestions?
40
Tell answer-author when the question is being voted to close
53
View an Alert on Close Votes for New Users
18
Notify OP after a question receives a close vote
17
Can we have anchors for the bullets in the [help/on-topic] list?
11
Close reasons are a poor way to give advice on how to improve a post
See more linked questions

542
How about a "Vote not to close" option to counter the "Vote to close"?
1204
Encouraging people to explain downvotes
850
Can we have the ability to retract a close vote before it closes?
971
Show all of my question/answers to me even if they are deleted
1827
Could we please be a bit nicer to new users?
397
Add a way for moderators to cast a normal, non binding close/open vote
1237
Don't throw away all votes when a user is deleted
251
Increase close vote weight for gold tag badge holders
344
New UI encourages askers to confirm or dispute duplicate votes