I wrote a very detailed answer on how black-skinned dwarves can still be realistic in a world with Earth-like evolution, got flagged for spam [duplicate]

This happened on World Building subwebsite. I'll try to post my answer below the separator line if the anti-spam will allow me.

Please, can I get any help on why is this considered a spam message, because I have no clue what that bot thinks I'm selling. What should I cut from this answer? I spend a lot of time writing this and it's really annoying that I'm not allowed to post. I have a hunch the bot detects "dwarven" as a misspelling of some unrelated word or simply doesn't like the repeation (which hardly can be avoided if I'm talking about dwarves and nothing else). Another theory of mine is that anti-spam bot doesn't like the s*x word, and considering that I was writing about evolution, mostly s****l selection, maybe it assumed I was promoting some sleazy website.

No luck, still getting flagged as spam. Here is the pastebin link: https://pastebin.com/dJk0JdQ8

And just for completness, the link to the question I was trying to answer: Why might dwarves be black skinned in a medieval fantasy world?

Edit: below is the error message after I press "Post Your Answer" as requested. It shows up every time I try to post, even after refreshing the page. 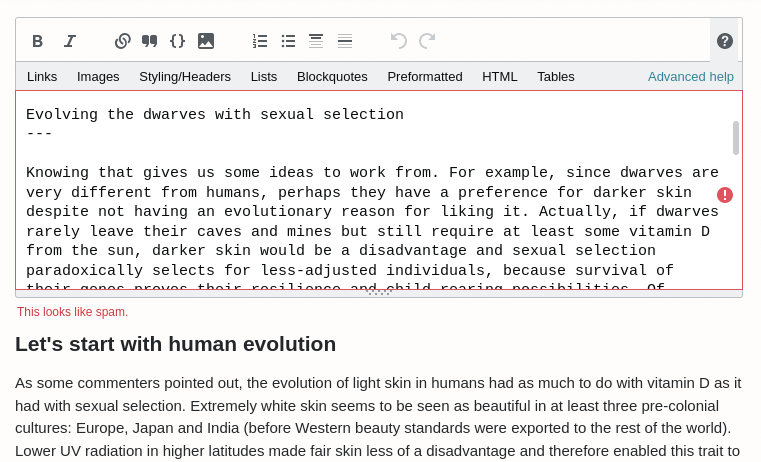 Update: I thought that maybe posting from behind the proxy and/or in private mode might have been an issue, so I tried to post from my home PC and the problem still persists. There must be a problem with contents of the answer itself. I've read a little more and it appears that spam-bot is very rudimentary, counting trigger words appearing frequently in spam campaigns and nothing else. It's not hard to imagine that race might be such trigger word, either used in political, racist context or trolling campaigns. Evolution can be flagged for creationists spam campaigns. Combination of sex, race and evolution in a very long post most likely raised more red flags that 1st May on the Red Square.

Update2: as advised, I posted a short test answer and it was accepted. After that I was able to edit the answer and paste the actual answer in it's place. However, the spam filter is unacceptable and circumventing it by exploiting what is basically a security gap is not really an answer. I leave this question up because I feel this still should be properly resolved.

Update
I just tried to post the given text as an answer and was able to get it through without any issues or errors.

Today's suggestion: could you try posting a different answer to that question? For testing purposes, it can be a "fake" answer, e.g. "This can't be done because Dwarves don't actually exist. They're fantasy creatures and are not subject to the laws of normality."

I'd like to see if you get the same error message with a shorter answer.

A Revised Guess!
Thank you for updating the link. At least the text you linked to makes sense in the context of this other question!

There are still a couple yellow flags: first, I don't see any evidence that you ever answered that question. Also, it appears that you joined WB.SE yesterday (13 Aug 2021) and have neither asked nor answered a question. I don't understand what you mean by not being "allowed to post". Unless you've been booted for being a rascal, there's no reason you can't post an answer. Not sure what to make of those data points!

Anyway, my advice now is to simply repost your answer! It's a lot better than some of the answers already given, and I'd judge it a solidly ordinary worldbuilding answer!

A Reasonable Guess?
I skimmed through your answer. You seemed fixated on skin colouration. The query itself doesn't mention skin colouration at all, so that's a red flag as it means you're possibly not answering the question.

Since the question was asked and closed two years ago, I wonder why this is even an issue for you?

I can't see your answer, so I'm assuming that it was flagged and one or more other members agreed that the answer was spammy enough to delete.

My suggestions would be the following. Since the question you were trying to answer was closed a couple years ago, you won't be able to answer it -- because it's closed. Since the answer you wrote doesn't have anything to do with what the OP was asking about (practicalities of a subterranean lifestyle), I'd argue that even if you did answer that way, it would be deleted for not answering the question.

So, I think your best bet will be to spend a few more minutes devising a good worldbuilding question that fits the answer you wrote. You've already got the title -- Why Black Dwarves Make Sense in a Fantasy Setting -- just compose a well written question to go with it! Post the question, wait a day or two and then post your answer! Community will decide how well you answered your own question!

Not the answer you're looking for? Browse other questions tagged bug answers spam .

140
Suggested edits that change links should jump out and punch reviewers in the face
109
Auto-delete/destroy 1 rep user when their post is deleted as spam
299
Add optional box for spam flags letting you say why you think it's spam
296
How do we encourage edits to obsolete/out of date answers?
2788
A Terms of Service update restricting companies that scrape your profile information without your permission
420
Can a machine be taught to flag spam automatically?
173
A machine can flag spam automatically. Can it do better?
28
Please don't welcome spammers and abusers to Stack Exchange