When checking the timeline of a post I noticed that "Post Closed" events are now attributed to Community, and the close voters were moved to the "comment" column. Before, all close voters were listed in the "by" column. The same happened for "Post Reopened".

However, the event was also turned into an "edited" event, with Community adding all the post content, which is a bit confusing.

Before (screenshot borrowed from this question):

This has been fixed!

This took a while to triage because it touched a ton of different functions I wasn't used to poking around in, including the post history and post history revision generation.

The source of the problem was a function that checked if the post history entry had any content changes. This is a function that effectively hasn't been touched since Atwood first committed it 12 years ago. The original function was:

This function was then modified to add a new component involving checking for some new feature that we haven't shipped. It looked similar to this:

This function is kinda hard to read though - applying De Morgan's law we can negate the entire statement to make it a little more readable:

There's a function that transforms the list of post history entries to revision entries, and it depended on this check. With this buggy behavior, it started doing unpredictable things like displaying extra revisions for reopens or showing weird things in the post's timeline. Lots of other things depend of this content check working, so I'm certain that other features on the site were impacted too.

The approximate period of time this bug was live was:

This bug seems to be much wider in scope, affecting actual site functionality, and not only display.

Not only closing events are affected, but other events (locking, deleting, etc.) are also affected.

See the below screenshot of a question's revision history: 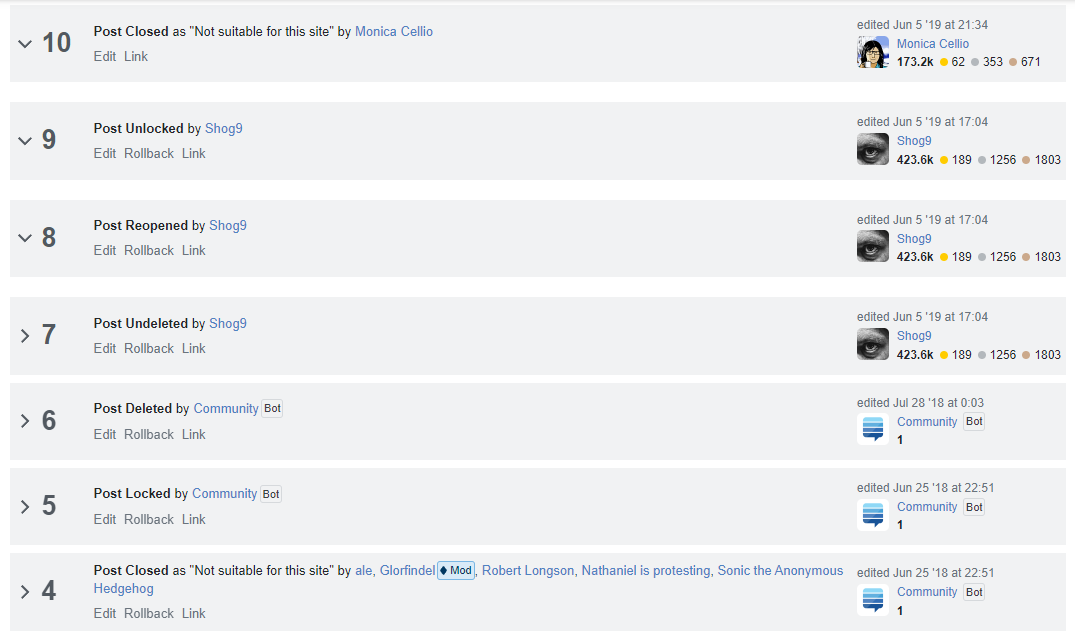 Finally, this bug breaks links to specific revisions on posts - as the revision numbers are changed, and the URLs only contain the revision number and not the ID, a link to, say, revision 5 which took place after a history event, will link to the wrong revision, as that revision is now numbered 6.

Not the answer you're looking for? Browse other questions tagged bug status-completed closed-questions revisions-list timeline .

2
Why is the "Became Hot Network Question" event shown as an edit?
34
What's the best way to contribute to Stack Overflow if you don't have a ton of technical knowledge?
24
Did the "grace period" for edits on posts break?
14
revision_number is returned in every revision item, even if it's not an edit
11
Editing an earlier revision of a post doesn't change it nor does it create a new revision item, but shows me as the last editor
12
Deleted users show up differently in a list in the timeline
17
Navigating to review /stats and /history causes the URL to change to a specific review item

8
Timeline should show user names associated with opening and closing
185
Every "close" has its thorn: replace "close" with "on hold" for the first five days
27
New timeline view only shows *last* accept vote, no un-accepts
17
Should the new timeline view show links to review items?
131
Can we show new/anonymous users more Q&A?
66
Make existing timeline icon of a post available to anybody and not only to mods
139
"Question closed" notifications experiment results and graduation