Performance delay in editor when moving to a blank line

I initially thought this affected MSE only, but now I started to face the same issue on other SE sites.

I've encountered/reproduced only on Stack Exchange on Firefox for Win 10.

Place cursor at the start of a paragraph: 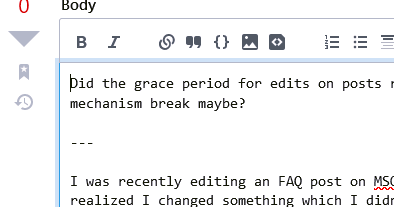 Press Enter twice, and try to move cursor up using the ↑ key: 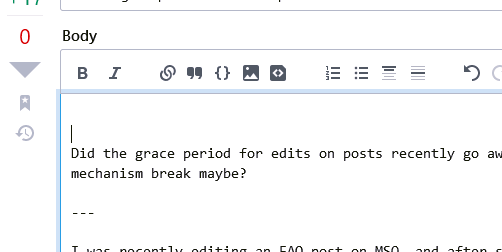 Huge delay is faced when moving the cursor up one or two lines.

I asked in chat a couple of days ago on how best to report it, so if there's any data the team here needs, let me know.

Note: I can repro most of the time, and it only affects (as far as I've encountered) jumping to blank lines.

Update: Based on two comments, the issue affects Firefox in general, though as demonstrated in another comment, it doesn't affect Wikipedia; for the time being I've rolled back the addition of the bug tag until the issue becomes more clear.

I've encountered this bug mostly on SO but also on SE (using Windows 10 Pro version 20H2 with Firefox 92.0). It's exactly as described. I'm under the impression it's not a delay but the cursor blink that isn't reset when you change line. It does happen most times when going upwards in the text instead of down, in the blank lines between paragraphs and code fences.

I just tried reproducing it in the below example and it happened a couple of times (less than 10%). It happens almost 80% of the time when I use userscripts (Roomba Forecaster, UnclosedRequestReview and SO Close Vote Request Generator with Violentmonkey).

Not the answer you're looking for? Browse other questions tagged support editor firefox performance .

2
How to show a blank line
72
The editor should be able to convert multi-line blocks to lists
11
Review queue edit posts mouse doesn't work
8
Down arrow key won't work after using the Hyperlink button
9
Performance hit when editing a quesiton
7
Every time I comment, I have to refresh my browser to see it