The "How to Format/Tag" boxes that pop up on the right sidebar when on a question edit page use less-accessible "lists" with the "►" character. For example, there's this in "How To Tag":

► complete the sentence: my question is about...
► use tags that describe things or concepts that are essential, not incidental to your question
► favor using existing popular tags

The page's markup claims that this is just regular text, not a list, using <p> tags: 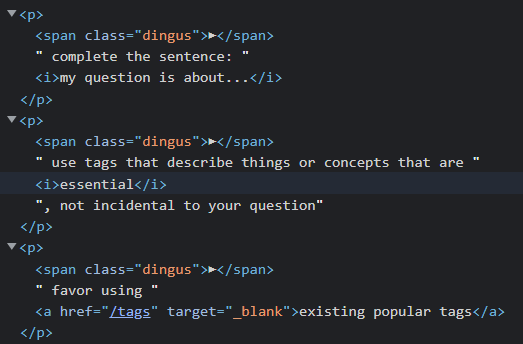 Thus, when a screen reader encounters this, it will just read off the name of the Unicode symbol, followed by the text, as if it was a regular paragraph. This is instead of treating it as a list, for example by announcing a "list of 6 items" and then each item's position as "3 of 6" or similar. It also breaks anything else that relies on list behavior. If a user has a keyboard shortcut to jump back to the start of the list they're currently reading, that won't function because the page's markup says there isn't a list.

Curiously, the "How to Edit" box doesn't have this problem. It's properly marked up with <li> elements inside a <ul>; the only annoyance to a screen reader user would be that the Unicode symbol is read off when looking at the list element.

Please use proper list formatting for the "How to Format/Tag" lists as well. If it's important to maintain the ► character for style reasons, then just follow the model of "How to Edit".

This has been finished. The old ugly arrows are now gone on both the the tag formatting and mod private message info boxes.

Not the answer you're looking for? Browse other questions tagged feature-request status-completed accessibility sidebar list .

26
Non visual way to see if a question you asked has an accepted answer?
9
Please add exact tag matches to the autocomplete lists
219
How to write nested numbered lists
222
Introduce a "general reference" close reason
419
Decision on rejected edits should be displayed as a notification to the editor
27
The excerpts at the top of tag question lists have been replaced by (the first few lines of) the text of the full tag wiki
25
Improve answer navigation for screen readers
582
We're switching to CommonMark