There's a Windows Phone.SE Why? [duplicate]

Ask Question
Asked 1 year, 3 months ago
Modified 2 months ago
Viewed 1k times
25
This question already has answers here:
The Windows Phone SE site has been archived (8 answers)
Graduation, site closure, and a clearer outlook on the health of SE sites (15 answers)
What is the usual process for closure of a site in public beta? (1 answer)
Closed 1 year ago.

The statistics for the site are not great. Fewer than 3,500 questions have been asked in 9.6 years. That's crazy. How has it survived so long?

I didn't know what the Twitter link referred to, so I clicked, and saw the Stack Exchange site has its own Twitter account with just nine followers.

Microsoft began to prioritize software development and integrations with Android and iOS instead, and ceased active development of Windows 10 Mobile in 2017. (Wikipedia)

Hey, maybe it has a group of hardcore users that hang out in chat? Let's take a peek… 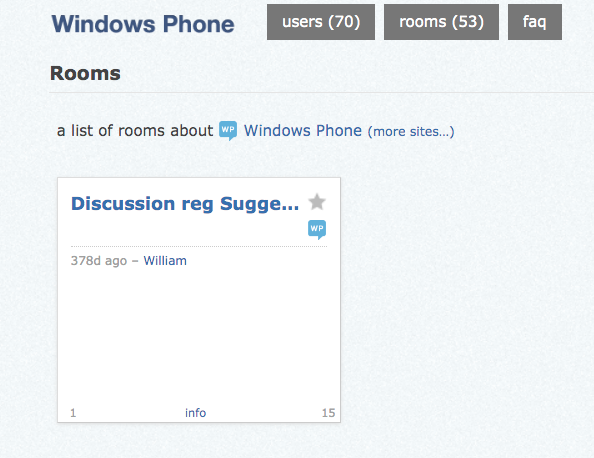 Erm, I guess not.

The site manages to recruit new users though…

It looks like a small ads (classified ads) page from yonder day :)

To be clear, I had and have nothing absolutely nothing against the users or the community of Windows Phone. I have never joined the site and I have had no interactions whatsoever with any user or moderator on that site. Despite the fact that the site is almost defunct there are some nostalgic Stack Exchange users who believe this site should remain open because its answers are still useful.

On the other hand, my question was closed as a duplicate and I must infer that the answer is found in this excerpt from an announcement posted in 2015: Graduation, site closure, and a clearer outlook on the health of SE sites

[…]The precedent was set early on that sites had two options; graduate, or get shut down. This created a lot of unnecessary angst for our smaller and mid-sized communities. Lots of folks on excellent sites assumed that since they hadn’t cleared the graduation hurdle yet, we might come in and turn off the lights at anytime. Not exactly great for morale.

Thanks to many devoted users, it’s grown clear that smaller SE sites can do a great job of maintaining themselves and producing high quality Q&A. Not every site is going to be a blockbuster success, but our small sites are serving their own communities well. We’re proud of you, and we want you here.

What does this mean? If there's enough moderation for a public beta site to consistently remain free of spam, for flags to be cleared, and for our Code of Conduct to be upheld, your site will remain open. However, if community leaders drop off, flags sit without being addressed, and we can’t find any suitable volunteers to step forward, the site gets closed.

As of this post, not a single site currently active in our network is at risk of being closed. Closing public beta sites is a rare occurrence; we expect it to stay that way.

Windows Phone graduated in August 2019 and is therefore not a Beta site. In 2021 there are currently nine open questions with a total positive score of 1.

This is answered in this post: A site needs to meet two conditions to be considered for closing. It needs to be inactive/have stopped producing helpful content, and it needs to lack the caretakers needed for flags and spam to be handled.

Windows Phone SE exists because the content on it might still be helpful to people, and given that questions still end up closed, it's probably safe to assume flags and spam are still handled. So there's no need to shut the site down and hide the content in a data dump.

410
Graduation, site closure, and a clearer outlook on the health of SE sites
122
The Windows Phone SE site has been archived
7
What is the usual process for closure of a site in public beta?
498
Congratulations to our 29 oldest beta sites - They're now no longer beta!
218
Congratulations to the 59 sites that just left Beta
59
SE is a dating site (revisit the last seen field)
57
2020: a year in closing
20
Should we be discussing the relative health and viability of a network site here on MSE?
12
What will happen to a site if the product it is based on is no longer relevant?
6
What is the process for closing/merging Stack Exchange sites if they eventually fail?
See more linked questions

410
Graduation, site closure, and a clearer outlook on the health of SE sites
239
Feedback Requested: Design-Independent Graduation
2805
A Terms of Service update restricting companies that scrape your profile information without your permission
461
Network-wide HTTPS: It's time
498
Congratulations to our 29 oldest beta sites - They're now no longer beta!
2528
Firing mods and forced relicensing: is Stack Exchange still interested in cooperating with the community?
2294
Stack Overflow is doing me ongoing harm; it's time to fix it!
556
The company’s commitment to rebuilding the relationship with you, our community
765
New Feature: Table Support
725
Stack Exchange Public Q&A access will not be restricted in Russia