When the daily up/down vote limit is reached, the "First answers" review queue becomes unavailable. However, on the Review queues page, the blue box which should state this is blank, e.g., as shown below from the Math SE site: 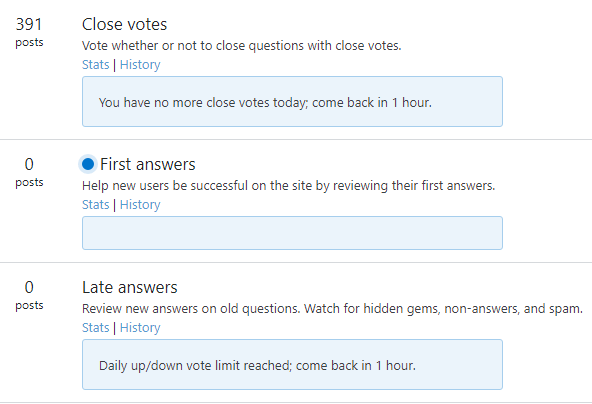 This is somewhat similar to Review queue "First questions" does not show any message when reaching the maximum number of daily reviews, but that one deals with a problem with the "First questions" queue instead, and with it occurring when having reached the maximum number of daily reviews. Note this other question was closed as a duplicate of this answer, although this is somewhat different as it's for the "First answers" queue, like what this question is addressing, and its problem occurs when in that queue rather than on the Reviews page. Although that answer was marked status-completed by kristinalustig, with an associated comment on Aug. 27, 2021 of

I pushed this fix out today, so it will be live either today or Monday, depending on how confident we are to push to production on a Friday afternoon. :)

Regarding my issue, that linked answer has an Aug. 27 comment from Jeremy Caney which states:

@kristinalustig: FYI: I assume this will be addressed by your fix, since it sounds like it's just a missing string token from e.g. a localization file, but this issue also appears on the /review page, where this message is similarly displayed below the appropriate review queue.

i.e., my issue was reported then. Also, there's a Sep. 22 comment from V2Blast which says:

@kristinalustig: Is this the same as this similar bug on the main review queues page?

The linked Role-Playing Games meta post says it happens when "out of votes", so I assume it's referring to the daily up/down votes limit.

Although this issue has been reported previously, I assume the reason that it's not yet been fixed is not due to any particular challenge or difficulty. Instead, the issue is likely quite simple to fix, i.e., it's probably just due to something like a missing localization string as Jeremy suggested, so I hope the problem will be resolved relatively soon.