How about doing something more with the "Today's Featured Site" thing?

A little-known fact about Stack Exchange is that, on the Hot Network Questions list at SE.com, in the top right corner of the page, there's a little box for "Today's Featured Site": each day, a different site on the network gets "featured" in that spot.

Yeah, it's a little-known fact. I've met people who've been prominent users and moderators for years and never knew (or maybe forgot) that that existed. But choosing (even randomly) a network site each day to promote is actually a really nice thing to do: it helps to spread visibility of the network, and while writing this answer I came to the conclusion that promotion at the site level - not the question level (like HNQ, where people see individual question titles) and not the broad topic level (like the new footer, where people see very broad topics of interest like "Science" or "Culture & recreation") - is the best way to cross-promote within the network.

Especially for sites where the existing posts are skewed towards a particular subset of the scope: the HNQ will naturally be even more skewed the same way, and it becomes a vicious circle wherein new users joining over time will have a stronger and stronger tendency to have interests in that same subset. Promoting the site as a whole might be a good way to bring in people who're interested in other parts of that topic, not necessarily the same subset that the existing community is weighted towards. And diversity of interests and topics is a good way to make pretty much any site thrive.

So, how about doing something else with the "Today's Featured Site" thing? Like sticking it somewhere more visible than a corner of a page that almost nobody ever visits, for a start. I'm leaving this discussion post very open, as I don't have a clear notion myself of how it could/should be used. Ideas, anyone?

I'd stick it right below the "Hot Network Questions" but only in homepage view of a site, not inside questions, so it won't be too much noise: 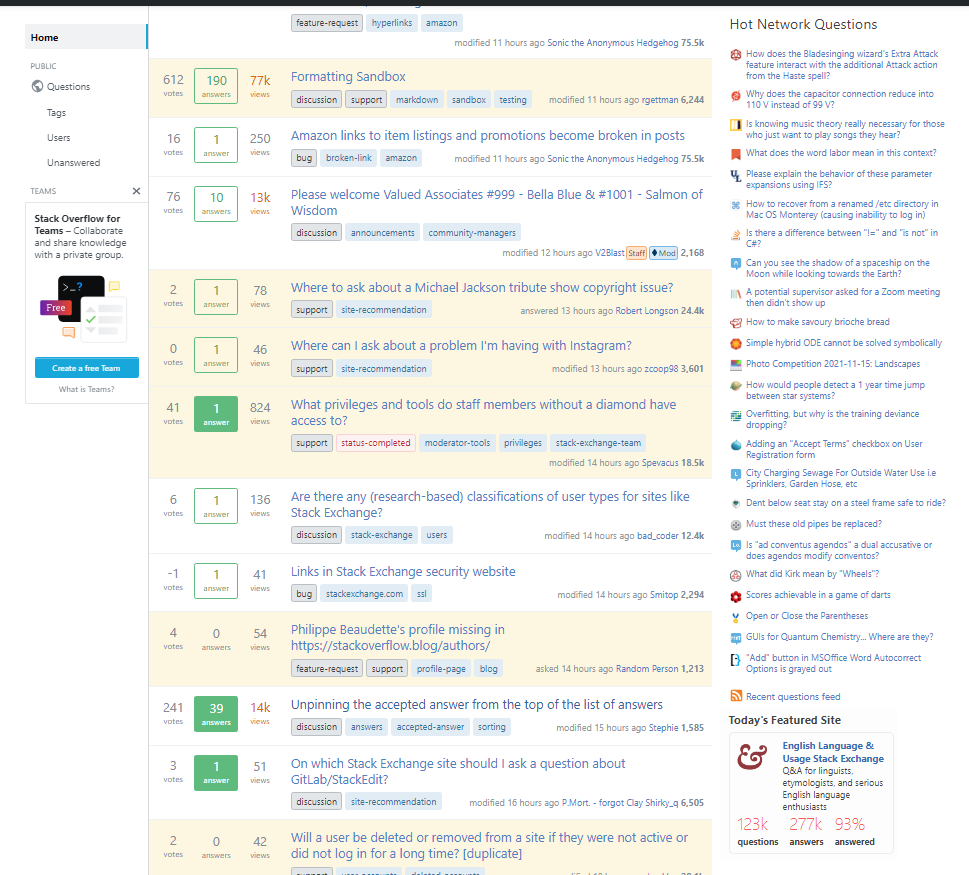 This way while browsing a site's questions list, users will see this and can decide to go and check the featured site.

101
Reducing the weight of our footer
18
How is the featured site chosen?

305
The future of meta.stackoverflow and meta.stackexchange
318
Build and strengthen the Stack Exchange community with "crossover questions" between sites
2794
A Terms of Service update restricting companies that scrape your profile information without your permission
461
Network-wide HTTPS: It's time
829
Net Neutrality and Stack Overflow / Stack Exchange
382
Updating the Hot Network Questions List - now with a bit more network and a little less "hotness"!
2515
Firing mods and forced relicensing: is Stack Exchange still interested in cooperating with the community?
2271
Stack Overflow is doing me ongoing harm; it's time to fix it!
583
We're switching to CommonMark