Where do I find the official guidance that I can link to regular users about handling posts from apparently suicidal users?

This came up again recently, with a post from an apparently suicidal user. In this case, the problem was exacerbated by the post itself including profanity/cursing too, which is usually cleaned up using rude/abusive flags. While looking to see whether users should flag as rude/abusive then, I realized there is apparently no definitive guidance I can link users to that says 'here's what to do, nothing more, nothing less'.

Moderators have a moderator agreement policy on what to do as moderators: we can clean up the posts if needed and are supposed to escalate things to CMs. But this isn't applicable to regular users.

There used to be this post outlining a few things regular users can do (vote to close as off-topic, copy-paste comment, flag for a moderator to lock/delete), but it's closed as a duplicate of the moderator agreement policy. Besides that, there's another later written unofficial answer to that post now, listing a whole list of things not to do, including a vehement argument against copy-pasting comments. But that answer doesn't give any actionable guidance (like voting to close or flagging for a moderator to lock/delete) on what actually should be done instead then to handle these posts as soon as possible while minimizing any friction, so it's also not something I'd link someone asking me 'what should I do in this case' to.

So, that leaves me with a few questions:

We are grateful for the community’s vigilance and empathy in watching out for each other.

Our official policy regarding suspicions of self-harm and suicidal users can be found at What are our policies regarding self-harm and suicide?. These types of circumstances can be difficult to manage and carry a lot of responsibility, and while we expect our users and moderators to report such incidents promptly, we do not expect anyone to feel obligated to engage further.

Users can raise a flag for moderation assistance under “in need of moderator intervention.” 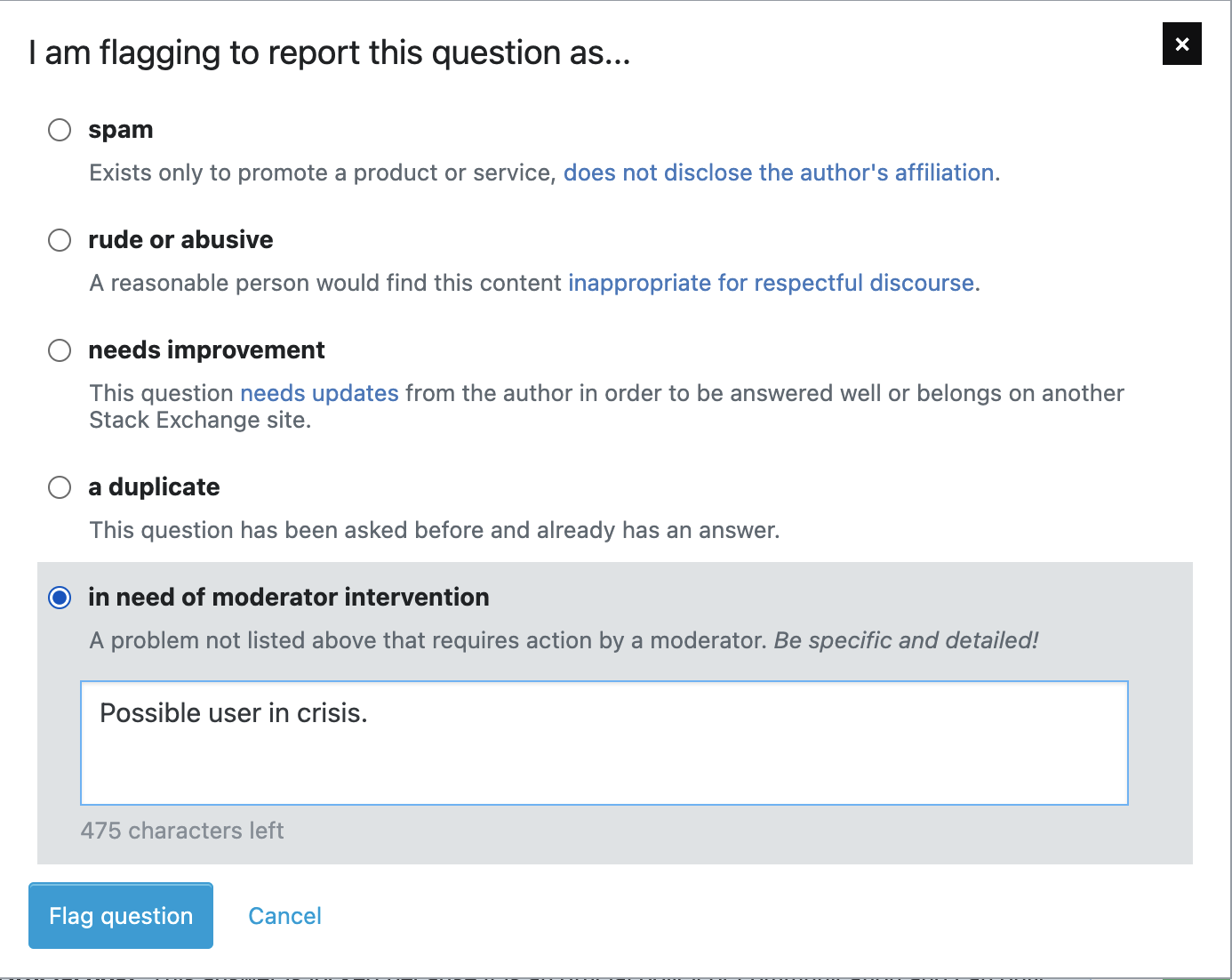 Moderators can use the "Contact community team" option under "Actions" on the user's Mod menu.

Again, you are of no obligation to further engage a user who may be in crisis. However, if you do feel you would like to engage, we would strongly encourage you to read this answer by Rebecca that Tinkeringbell shared in the original question. It has useful information that could be helpful.

Not the answer you're looking for? Browse other questions tagged support moderation users policy .

126
What's the official SE response to serious mentions of suicide or self-harm in posts?
37
What are our policies regarding self-harm and suicide?
64
Let's have a formal way for mods to contact the Community Team about suicidal users in chat

452
A site (or scraper) is copying content from Stack Exchange. What should I do?
295
Why we don't keep public records of suspensions
284
An open letter on the state of curation and moderation
256
Stack Exchange staff speaking to the press instead of the community
300
An update on my resignation notice
287
Under what circumstances will Stack Exchange, Inc. share private/sensitive information with the press?
554
The company’s commitment to rebuilding the relationship with you, our community
132
New post lock available on meta sites: Policy Lock