I've only seen this happen on music.se, the latest one on Metronome Sound today.
The last code block on a page renders as a blank box.

It looks like a few people have had different attempts to get the last code block on the page to render correctly. The first block has no issues. Individual elements marked as code also seem unaffected. If you refresh the page it briefly appears correctly, then breaks half a second later. It looks fine in the editor as it's being constructed.
I've tried to clear this one down & regenerate it to avoid any non-standard characters. No effect.

I'll test copy paste of it below, see what happens...

Appears to render fine in here. Screenshot of the affected page, in case others cannot repro. 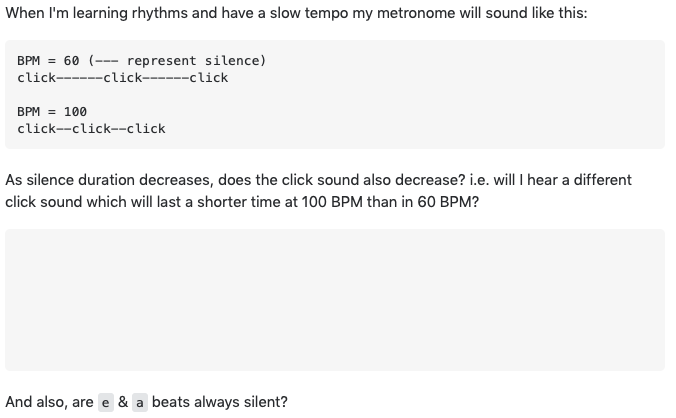 The current version of the linked page now has one fixed using <pre> blocks & the last one left 'broken' - so users on Music.se can actually see the question as asked & not have to play with the code blocks themselves in order to read it.

The problem lies in Music.SE's jTab extension, which becomes apparent when you analyze the source code of e.g. this revision page:

I'm not sure under which conditions the extension is activated for a code block, but I guess it interprets the hyphens as part of the tab. I see you fixed it already, but another option would be to try replacing them by other sorts of dashes?

386
How do I format my code blocks?
647
How do I escape a backtick ` within in-line code in Markdown?
0
Why does code formatting for XML fail here?
511
Implement ```-style (fenced) Markdown code blocks
583
We're switching to CommonMark
311
Goodbye, Prettify. Hello highlight.js! Swapping out our Syntax Highlighter
760
New Feature: Table Support