I don't normally care much about these things, but the new fuzzy outlines (and related changes) on the numbers of unread messages / rep delta really hit my eyes wrong (and my eyes are already challenged enough, thanks). It's not a "who moved my cheese" thing, it's an "it's much harder for me to read it now" thing.

For those who, like me, have a tendency toward double-vision or focus issues, please consider an option for plain numbers without the outline (for these and for other places you might be considering adding such an effect). Or just remove the fuzzy outline entirely. (Is it really an improvement for people with "normal" vision in some way?) Specifically, an option that:

I should note that it's not just fuzziness, though that was what I focused on (no pun!) in my original post. A couple of pictures from Justin's post below draw a clear contrast (er, again, no pun):

I'm not a designer, but:

I see only disadvantages to this design. The semi-transparent border only takes up space, making the badge look larger while providing even less room for the content. The numbers are really squished into the small area, they should have at least some margin to the borders. The transparency also has quite different visual effect on the white and black versions of the top bar, making it hard to create a version that works on both.

So the numbers are harder to read because they're squished into a small core badge, and the icons are also harder to see because the semi-transparent part overlays a larger part of them. This combines the disadvantages of smaller and larger badges while providing none of the benefits of either.

It also just looks plain weird to me, I've never seen a badge/notification design like this. The old version was much better.

On a black top bar the red outer layer is almost invisible, this makes the design look extremely inconsistent if you have both red and green notifications:

Yes, it would be great if these changes could be reverted back to the previous design. The reputation text appears smaller than before (probably because it's crammed into that capsule layout), and makes it harder to see. I've got eye problems, and this just made it worse.

Also, the red outer layer for the inbox notification indicator is pointless if the top bar is in dark mode, because it's practically invisible. Please consider changing it back.

Also, note how the highlight(?) (when you hover over the review queue icon) cuts a small part of the trans[lucent]/[parent] border (on the right side) of the reputation indicator: 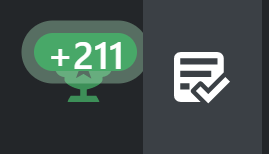 This is not the case on the left side (when you hover over the inbox notification icon).

I'm not getting any younger, and after years of working in front of a PC screen my eyesight isn't getting any better.

Personally I think the fuzzy edges make the icons harder on the eyes.

It looks somewhat better if you add this custom stylesheet:

I'm not too proficient in CSS so tips are welcome.

We've made some changes to the design and removed the box shadow (referenced here as "fuzzy outline") around the notification indicators.

We were originally using our unmodified activity indicator component for these indicators. We use these indicators a bit across the site to designate things like "new activity", but this is the first place we're using them over text and with numbers inside. We reviewed the context in which these are used and came to an agreement that the semi-transparent box shadow makes the layout a bit busy/distracting/confusing.

We went back to the old design a bit, which handled this context better. Technically, we didn't remove the box shadows, but made them the same color as the background they sit on. This gives the indicators a bit of extra visual weight as they "carve out" the area around them.

We're currently reviewing other improvements to this component, such as possibly increasing the padding, to improve the user experience. 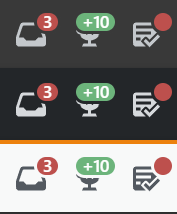 127
Feedback request: New top bar and MultiCollider redesign
199
The new top bar is out on meta. Consider it a beta
146
Is anyone else personally terrified of the new bar at the top?
122
Keeping the top bar logged in
29
New beta style is much harder on my eyes; looking for CSS overrides to fix
268
Can we reserve the top bar announcements for actual site news?
113
Request for a possibility to adjust the spacing between lines
38
New highlighting is suboptimal for colorblind individuals
12
Alignment/spacing issues in the review interface