Why is this deleted meta question considered spam or abusive? (Why were my flags to remove the spam or rude/abusive flags declined?)

This question here on this site was deleted ten years ago, as it was a non-useful joke question. (It was posted during an era when joke questions were not necessarily considered bad or harmful questions for the site, but merely controversial. To be clear, I think such questions that were deleted should remain deleted.) Here's a screenshot of the question: 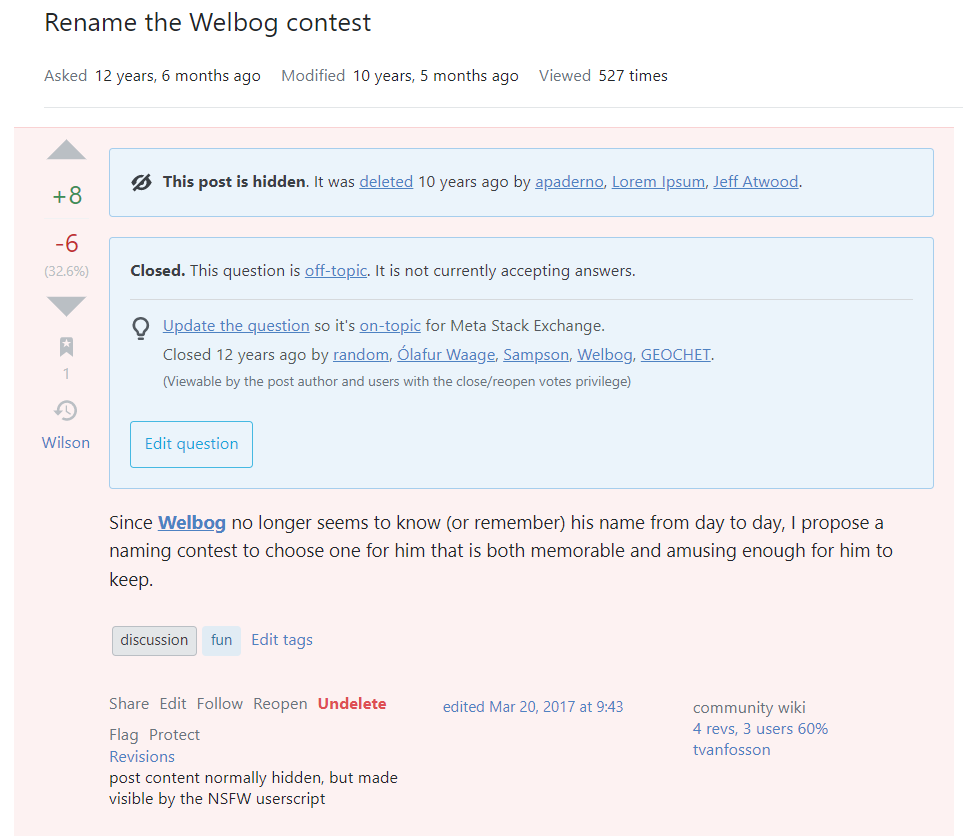 (This is the link in the question. Back in SO's early days, users would have the same user ID issued on SO and Meta.SE - then Meta.SO - which is why that link still links to the same user on the current Meta.SO, a "standard" per-site meta.)

When it was deleted, there was an active flag on the post as spam or (then known as) offensive, and so it shows with a spam/rude mask every time I browse to it (as a 10k+ user without any user scripts). As I don't think the post is spam or abusive, I've flagged the question asking that the helpful spam or rude flags be cleared so it won't show with a spam mask. However, both times I requested that, the flags were declined:

(As to why I flagged twice: I ended up coming across the same question much later and thinking the same thing, and flagged it again not realizing I'd already flagged it nearly three years prior.)

To be clear, I still think the question is a bad fit for the site, and prefer that it remain deleted. I even mentioned it in my second flag, but it was still declined. I'm aware that clearing spam or abuse flags has the side effect of undeleting the post, but I made it clear in that flag that the moderator should reverse that side effect afterwards.

Can a moderator please explain why the question is considered undisclosed promotion under the guidelines for spam posts (the only link is - or was at the time - to a local user profile), or is a violation of the Code of Conduct, and if so, what clause is violated? In other words, why does the post still deserve to be flagged as a spam or abusive post and have its content hidden from 10k+ users?

It doesn't seem a productive use of our time to deal with 10 year old questions.

Uh, it's a deleted post with admittedly no value, so uh, why are you even browsing to it?

Let's consider a few things — is there any "ill effects" to the user who posted it? He's got 44k, isn't suspended or under any sort of restrictions. If he was active, it should be up to him to ask to clear his record, but I've not recalled seeing him around here... well the entire time I've been a moderator

There's some additional context via flags which we can't follow up on, which might indicate the flag was appropriate at the time. It involves the user's username at the time, which I don't think I can look up, nor well, is it a great use of time. Basically short of someone who had mod powers a decade ago, and remembers what happened, no one might ever know for sure.

So, practically, no one's going to find this unless they literally either posted on this post years ago or looked it up. The flags have no lasting effect. To check the validity of the flags, we need to find someone who remembers what happened over a decade ago. It could have been valid at the time, but it's not a great use of our time to find out. It's plausible the flags were valid at the time of flagging, and probable, and tbh, clearing flags on a post that was deleted for valid reasons a decade ago a waste of time.

In short, there's no change that this isn't something that needs moderator intervention is true. I'd rather be dealing with actual issues now than some decade old potential misfiling of what the status of a post should be with absolutely no impact on the community. That's to say, there's no point in us clearing the flags and undeleting, then redeleting the post.

Your flags were declined because:

Really, there isn't much more to say. If you can take the effort to hunt down the link for something that was deleted a decade ago, you can just as easily click through the spam mask. The question was flagged as rude/abusive and spam. And at this time, there is no way to know if those flags were 'part of the joke' or not, and there is no way to just clear the spam flag without also clearing the r/a flag. They were never declined by anyone before deleting the post, so that's in the favour of the 'not a joke' argument. It's not something that's putting other people in trouble, like pointed out in the comments already, so you're just making mountains out of molehills here.

As for your insistence upon needing a rule from the CoC before accepting this doesn't need moderator intervention: "focus on the content, not the user", see also this post.

Not the answer you're looking for? Browse other questions tagged discussion support meta specific-question declined-flags .

862
The Many Memes of Meta
24
Should any Meta post that calls out a user by name be deleted, not just downvoted?
41
Spam masking is over greedy - please do it only if post received at least 3 spam flags
13
Don't invalidate spam or abuse flags upon review deletion

504
How does deleting work? What can cause a post to be deleted, and what does that actually mean? What are the criteria for deletion?
592
How does the bounty system work?
724
Your answer is in another castle: when is an answer not an answer?
409
Graduation, site closure, and a clearer outlook on the health of SE sites
2788
A Terms of Service update restricting companies that scrape your profile information without your permission
420
Can a machine be taught to flag spam automatically?
2501
Firing mods and forced relicensing: is Stack Exchange still interested in cooperating with the community?
2252
Stack Overflow is doing me ongoing harm; it's time to fix it!
981
Firing Community Managers: Stack Exchange is not interested in cooperating with the community, is it?