Is there a new kind of spam floating around the network nowadays (Spring 2022)?

This post is more of a “heads up” post than anything else since this recent spam trend I have seen seems quite novel and interesting.

I noticed this post on Super User (now deleted and flagged as spam, so check edit history or look at the screenshot below) that superficially seems like a legitimate post about hard drive failures.

But two odd things: It described a failing SSD as making noise (?) and then went on to referring the storage device as a hard drive. But the text “SSD” linked to some computer parts site. This was the only link in the post; nothing else.

Since there was no rhyme or reason to the post and the link seemed spammy, I believed it was spam and stand by the assertion.

Especially after seeing this other post by the same user on Lifehacks that followed the same pattern: Seemingly legit question with one link that was to the same shopping site and linked to a word that made little sense in the context of the question. Mind you the question was off-topic since it was about PC hardware and not a “life hack” at all.

To me it seems the pattern in these spam posts are:

I seem to recall a question on Super User a week or so ago where a comma (,) was linked to a spam site as well.

Note, as per a comment request, here is a screenshot of the supposed SSD-related post on Super User. 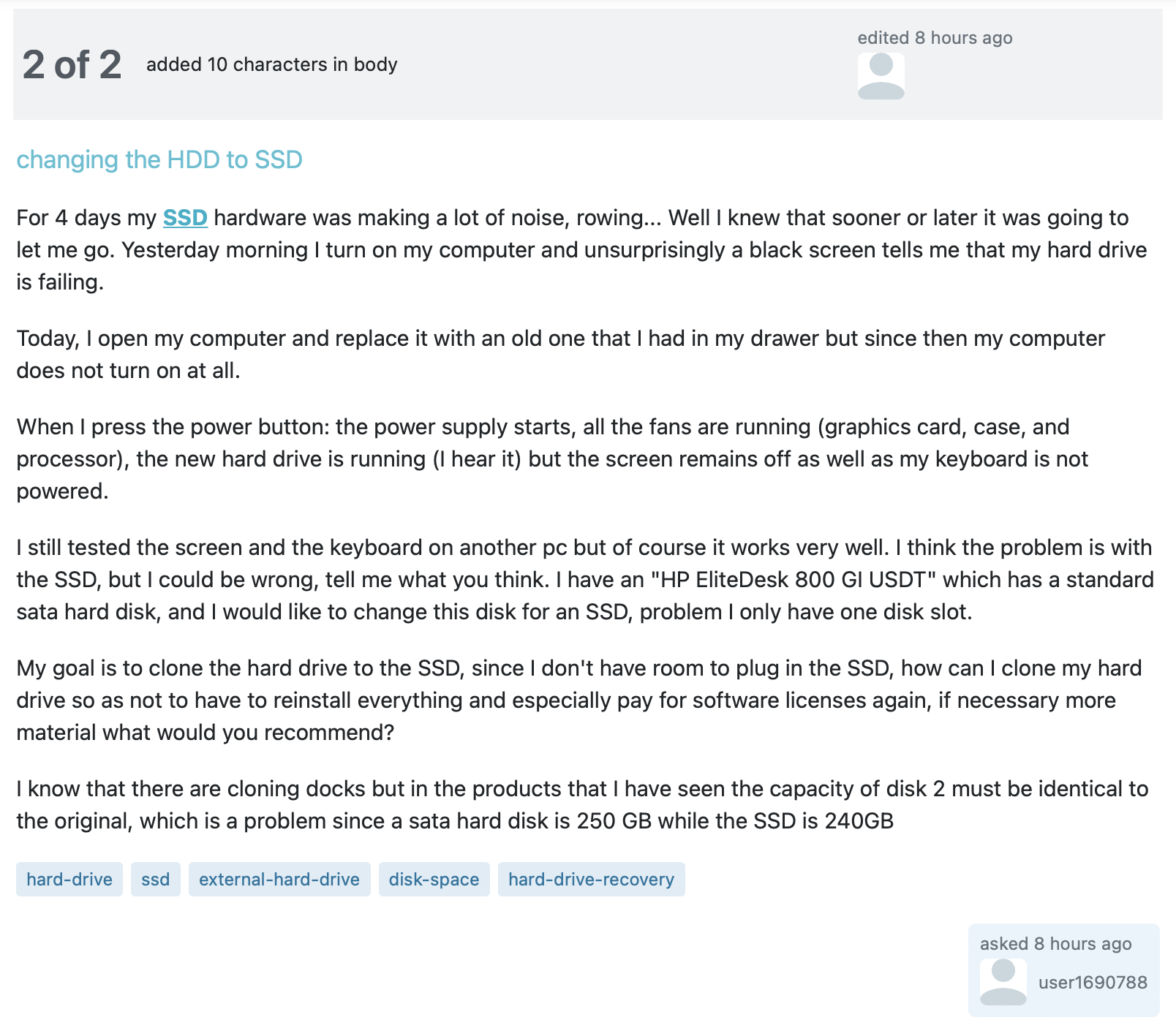 This type of spam is reasonably common across the Stack Exchange network. It's harder to spot than the ones advertising drugs or spellcasters, but you were right, it's definitely spam. Sometimes, users really have those kind of problems, but then they'd link to a detail page of the model they have, not a list page or (more commonly) a review of the top x best models on a blog site.

Luckily, those websites share some characteristics which makes them easy to spot, and we have a lot of volunteers in the Charcoal project who keep an eye on these posts. You're welcome to drop in at Charcoal HQ whenever you have a doubt about a potential spam post.

Both of your examples were detected:

and with additional thanks to local moderators / users such posts are swiftly dealt with.

I seem to recall a question on SuperUser a week or so ago where a comma (,) was linked to a spam site as well.

Yes, that happens quite often as well, and we have two spam detection reasons for those cases:

Especially the latter is not a very reliable way to detect spam; new users sometimes get confused by Markdown and produce badly formatted posts. Well, the least we can do then is try to fix them :)

Not the answer you're looking for? Browse other questions tagged discussion spam .

620
Formatting Sandbox
539
The current review system encourages fake reviews; some people upvote everything rather than actually fixing problems
724
Your answer is in another castle: when is an answer not an answer?
299
Add optional box for spam flags letting you say why you think it's spam
2788
A Terms of Service update restricting companies that scrape your profile information without your permission
420
Can a machine be taught to flag spam automatically?
827
Net Neutrality and Stack Overflow / Stack Exchange
2501
Firing mods and forced relicensing: is Stack Exchange still interested in cooperating with the community?
2252
Stack Overflow is doing me ongoing harm; it's time to fix it!
981
Firing Community Managers: Stack Exchange is not interested in cooperating with the community, is it?