Why is [meta-tag:status-planned] not rendered in this tag info?

I have noticed that the tag info for status-deferred on MathOverflow Meta contains the paragraph looks like this:

Contrast [meta-tag:status-planned], in which a feature is something that the site developers have definitively approved for implementation but the timing is unknown.

On the same site, it renders fine in the preview while editing.

At the same time, on Mathematics and on Meta Stack Exchange, this renders just fine. I.e., it looks like this:

Contrast status-planned, in which a feature is something that the site developers have definitively approved for implementation but the timing is unknown.

Only later - both from the answer and from similar Glorfindel's post "Pregenerated Meta tag wikis aren't rendered correctly" - I've realized that there are the same problems with the tag info for status-planned, status-norepro, status-reproduced and status-bydesign.

The main question: What is the reason that the status tag isn't rendered as a tag here? Can this be somehow fixed?

Added later. To help a bit with quantifying how many sites might have similar problem in this particular tag info, I have created a small SEDE query. According to SEDE, only 27 sites have the tag info for status-deferred and only 26 sites have the tag info for status-planned. Looking at the other three tags, 9 sites have a tag wiki for status-norepro, 9 sites for status-reproduced and 14 sites for status-bydesign. (Some of them were created only recently - this post lead to some manual edits. Some of those edits are still pending. All numbers as of May 29.) So the remaining sites probably have the version imported together with these default tags - which includes the mistake mentioned above.

Here are some additional SEDE queries which might help to find the sites where this problem could manifest:

Here is a screenshot showing what I see on MathOverflow Meta: 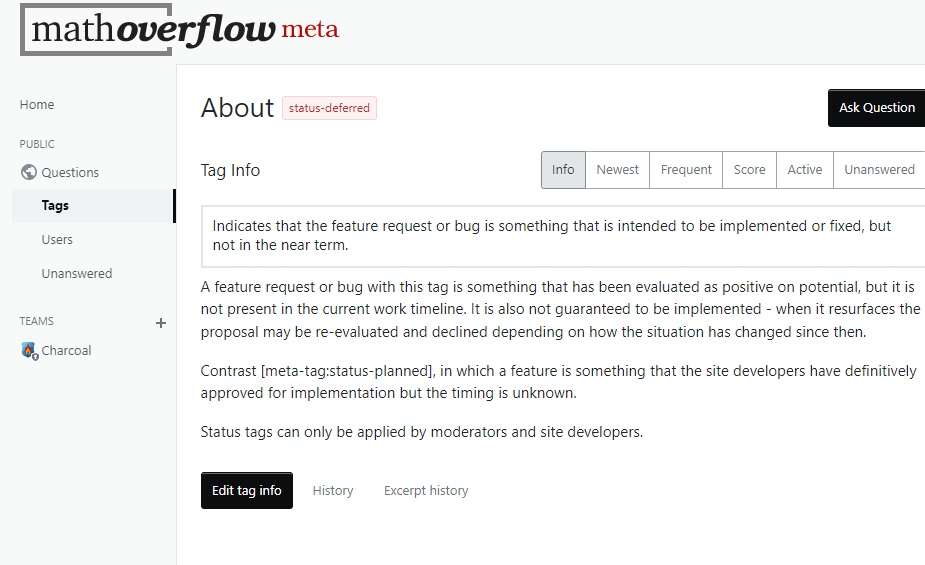 When I click on edit, in the preview everything looks fine: 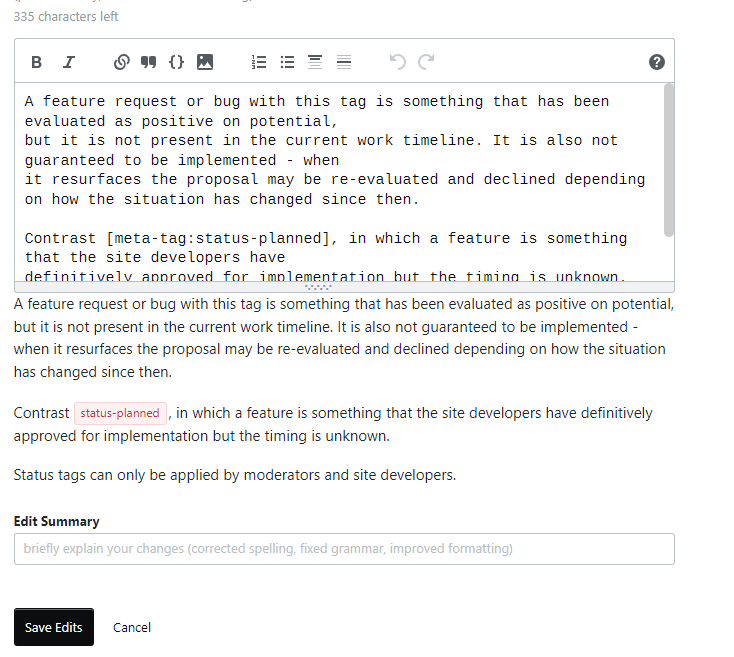 On Mathematics Meta, the same tag info is rendered without any problems: 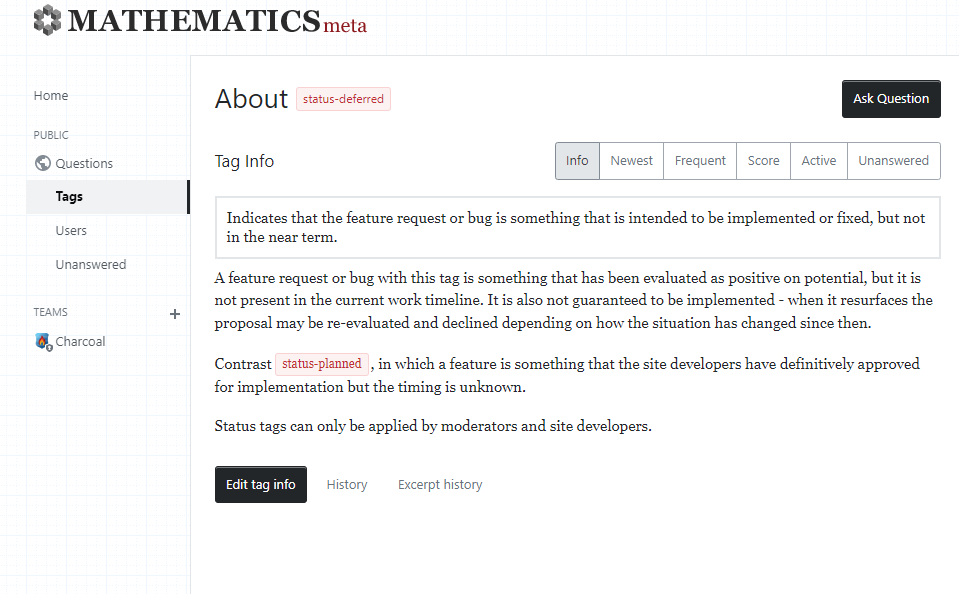 I talked to Adam about this and it seems that I'm correct - as far as he can tell, for the default templates we don't actually process the Markdown. I've added a status-review tag to the question so that we can fix it but it'll only address newly-created templates, not the existing ones.

It looks fine when you click edit because the preview is rendering it in the browser. But when we create content, it's rendered from Markdown to HTML when it's created and only updated when it's edited - except, apparently - with these tag wikis.

Saving a new version will fix the issue - sometimes you don't even need to edit the content, just click "edit" and then "save". When I was looking at the MathOverflow one on my phone, it didn't actually save the newly-rendered version but I've since been able to get it to render on Proof Assistants and Adam was able to get it to work on Substrate & Polkadot.

The short-term solution is identifying the sites where this needs to be re-rendered and submitting edits. The long-term solution here will be making sure that we're rendering the MD when these default templates are created.

Not the answer you're looking for? Browse other questions tagged bug status-review markdown tag-wiki moderator-tags .

11
Why can't I submit this meta tag wiki edit?
6
Tag Wikis are not properly indicated in the global profile
12
The imported tag-info for default tags is ignored in revision history
6
Why is there a difference between rendering of links in tag-wiki and in editing preview?
5
Pregenerated Meta tag wikis aren't rendered correctly

80
Do not expire single-use tags that have a tag wiki
48
Display Tag Excerpt tooltips when editing a question
583
We're switching to CommonMark
758
New Feature: Table Support