Repeatedly shown possible duplicate checkboxes on my question after dismissing it

My question currently has some duplicate votes, but I can't seem to get the message to go away and stay that way: 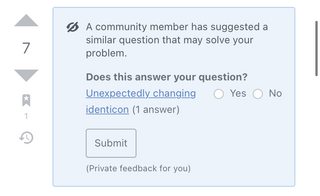 A community member has suggested a similar question that may solve your problem.

Does this answer your question?

(Private feedback for you)

I checked it once and submitted, I did it again when another duplicate question was offered and now I have to do it again. It vanishes after I check it and submit but then later comes back, probably in response to getting a new close vote, as specified in the original announcement (even when it's the same dupe target). I also edited my question at every point during this and that didn't do anything to dismiss it.

Assuming that I'm right, a user may have to dismiss this message five times per close cycle (one flag plus four close votes). More if the votes age out but people keep on casting more.

This was annoying and confusing for me, so I can't imagine what someone who doesn't know Stack Exchange would feel. They certainly wouldn't know that more people are casting close votes, and the message unexpectedly returning doesn't really help with that either. It just looks broken.

Can't this be made to respect the fact that I've already dismissed it, and also edited?

347
New UI encourages askers to confirm or dispute duplicate votes
17
Does this answer your question? Notice remains open even after submitting feedback
9
Why do so many users have no hash value for their identicon, resulting in the default identicon being used for each of them?
8
Don't show "Does this answer your question" dialog again when another duplicate flag/vote (for the same original) is cast
5
How do I stop having the same "community members have suggested a similar question" pop-up?

73
Auto-generate the "possible duplicate" comment when question is flagged as a duplicate
12
Why wasn't the possible exact duplicate of a question listed on closure of the question?
182
We should be able to close questions as duplicates of any question
187
Can we clarify to the OP that their question is not yet closed and the duplicates are only suggestions?
347
New UI encourages askers to confirm or dispute duplicate votes
42
Confirming that my own question is a duplicate by voting to close should have immediate effect
336
Gold tag-badge holders and moderators can now edit duplicate links
91
The auto-comment “Does this answer your question?” generated when voting to close as a duplicate is sometimes confusing