I noticed a huge -200 drop on my reputation on https://blender.stackexchange.com/ and I've read it has something to do about someone serial voting on my posts and needed to be reversed but I did not notice any such behavior when you look at the history of votes I got. So I'm thinking, could this perhaps be a mistake? 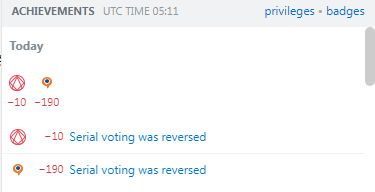 I read What is serial voting and how does it affect me? and it says "the system should automatically detect it and reverse it for you within 24 hours" - but the votes I received "fraudulently" don't add up to 200 even in the past 7 days. 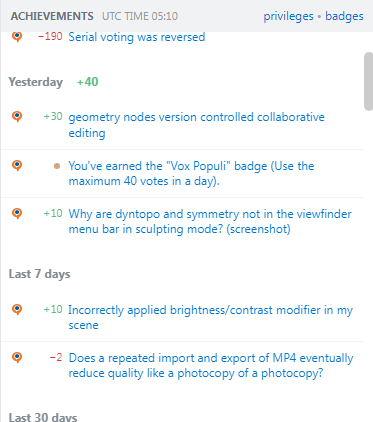 Earlier today, a tranche of upvotes was removed from select sites once it became clear enough (given the available evidence) that they were cast with little-to-no consideration for the content of the posts. Further specific information about this case will stay limited to the moderators of the affected sites and the user(s) directly involved.

Just to clarify, vote reversals do not typically mean you've done anything wrong - but I can confirm that's true in this case. You've done nothing to worry about. This vote invalidation affected a decent number of people, and you unfortunately happened to be one of them.

While we have the ability to remove significant parts of the voting record, it's not a joyous experience for anyone. This type of vote invalidation is uncommon, and isn't done lightly. We weigh both the volume of users affected, and whether the invalidation is as small as we can reasonably make it. (We also routinely consider our confidence in the evidence we have.)

While I can't take questions specific to this case, I'm still happy to clarify questions about general policy - at least, when I'm confident in the answer!

Not the answer you're looking for? Browse other questions tagged support reputation serial-voting .

572
What is serial voting and how does it affect me?

137
The vote fraud script breaks legitimate polling questions - A serial downvoter's lament
83
Undetectable MICRO Serial Downvoting. What is it? What to do? What the heck!
0
Serial downvoting causes poor appearance in reputation tab
7
Do the serial voting scripts take into account user age and frequency of posts?
8
The serial voting guidance in the Help Center should be consistent with Meta
4
Trying to understand a "-12 Serial voting was reversed" reputation entry
29
Informing new users that targeted voting is not allowed