Ask Question
Asked 16 days ago
Modified 16 days ago
Viewed 105 times
4
This question was closed because it could no longer be reproduced. It is not currently accepting answers.

The new styling on the bottom-share-links elements cannot be read. It has bad colors and ultra-low contrast. Here it is on ELU for example:

First, you cannot have red text on a red background. There simply isn’t enough contrast.

Secondly, that’s just the Facebook part. The Twitter part, which here is shown in mouseover colors, it effectively erased altogether.

Perhaps designers with perfect monitors and perfect lighting with the eyes of a twelve-year-old can read this, but nobody else can. It flies against all web accessibility guidelines. Even a trivial hue comparison "by the numbers" shows that this is egregiously illegible.

And it isn't much better on Stack Overflow either:

Now the blue on red is VIBRATING it's so awful. Third and last, this is gaudy and gross to look at. A <BLINK>Facebook</BLINK> effect would be less distracting than this is.

This shows that it's not just a problem on one site alone, but everywhere on the network.

Here's an image of the weird computed values on one of those elements from Chrome: 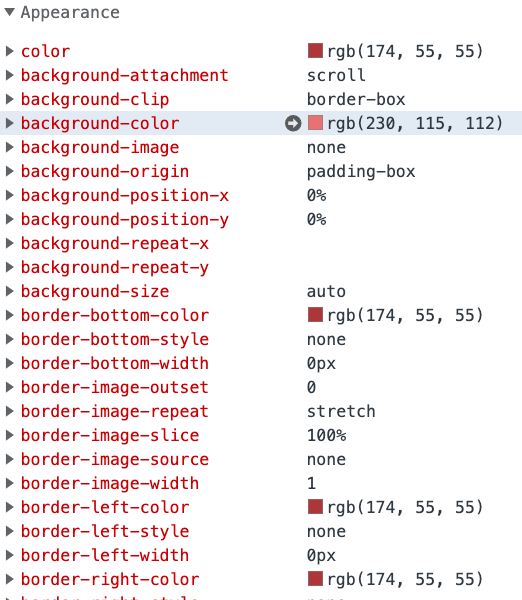 I wonder what could be injecting these weirdness on me and not others. Curiouser and curiouser.

These issues all go away when using an incognito browser in Chrome. That means it's nobody else's problem.

I do wonder what I've accidentally enabled. Perhaps Adblock Plus suppresses those social media links normally, and I've unknowingly jiggled something in its settings. This is definitely a brand new "special effect" for me.

In any event, the answer must be that this is something in my own settings that I don't even know about, since it disappears when incognito in the same Chrome browser.

And the answer is...

Yes, this is specifically caused by Adblock Plus. The proof is that when I disable that extension on the SE page, all the weirdness goes away. I'm going to blame this one on cat-walks-on-keyboard-and-changes-your-world-while-you're-up-making-coffee.

Not the answer you're looking for? Browse other questions tagged bug design accessibility .

5
Styling of text and links in store
8
"Share" links on the FAQ point result in dead links
50
Can't tell who I voted for with the new button styling
2
Area 51 Share Links aren't updated
26
Is it possible to make the annotation and flag counters on profiles colorblind friendly?
12
Links and buttons in the "Share" box are squished/aligned oddly
24
Links and buttons in share popover are positioned vertically and inconsistently left aligned