First, a quick disclaimer: I don't know Rust (or Go). So I'm going to focus on only things that are obvious to a programmer unfamiliar with the languages discussed in the post. I'm sure a Rust or Go expert could find additional errors, based on the accuracy of what I can verify.

This is just...wrong. First of all, the heap isn't necessarily hierarchical—there is a wide variety of techniques used by memory allocators. They (and the source they appear to have gotten this from) seem to be conflating the data structure called a heap with the memory-management concept of the heap. Based on the phrasing in the blog post, ("The stack is a linear data structure... The heap is a hierarchical data structure..."), it's pretty clear where they got this information: 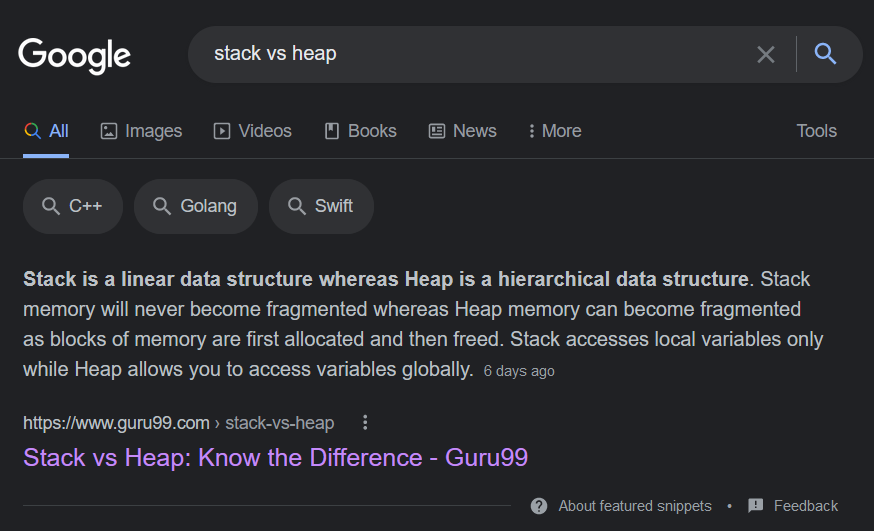 Second, the heap stores more than global variables (it stores anything allocated off the stack, which includes the storage for any dynamically allocated objects), and it doesn't store them "randomly": it uses a memory allocator. Different allocators use different strategies, but I'm pretty sure storing things in random locations isn't one that any reasonable allocator uses. They refer to this "random process of allocating memory" again later, as well.

Local variables, functions, and methods reside on the stack...

No, functions and methods are stored in the code. Maybe they mean function/method parameters?

...and everything else resides on the heap

...except for constants, which are stored elsewhere.

When a literal is pushed onto the stack...
...
Rust handles memory efficiently by storing literals (integers, booleans, etc) on the stack

The author seems to have no idea what a literal is (it refers to writing a literal number, string, etc. in code). They're almost certainly thinking of a primitive. And primitives could also be stored in the heap, depending on how they're used.

This could be detrimental to code security if external dependencies use the unsafe keyword.

Why is this specific to external dependencies? It's just as detrimental if you do it in your own code.

Rust, with the standard library and borrow checker, would be better to use in building resource-intensive applications that need handling.

It's unclear what it means for an application to "need handling."

Rust for building applications that require low-level interaction where performance and memory safety is paramount
...
you can consider using Go for programs where memory management isn’t a big deal and you care about performance

Which one do I use when I care about performance?

Okay, this one is a cheap shot and not actually an error. But the phrasing is awkward: are they comparable or not? They probably meant different.

The code in this section does not match the output. The code uses a primitive integer, which does implement the Copy trait. The output uses a string, which does not. The text switches which one it's talking about back and forth.

Finally, the article contains numerous images of text. The author and editors should strongly consider reading Why should I not upload images of code/data/errors when asking a question? Try shrinking your browser window down like you were on a mobile device and try to read them. And naturally, they all have blank alt text, as is standard for the blog, so they're completely inaccessible to users with screen readers.

As always, I appreciate the thorough comments on this one. It looks like this post is pretty badly incorrect, so I've taken it offline for now. The amount of work that it'll take to get this to an accurate state is not something I can prioritize right now, so instead of having something potentially harmful up while I make some edits, it's going away.

I'm also looking to change who I accept pitches from. I'll be accepting less coming in and reaching out more. For incoming pitches, I'm considering requiring SO accounts with a proven track record -- I would appreciate your thoughts on whether that's a good idea.

Stack Overflow has a global audience and is visited by users of all skill levels. We want our blog to represent the community in all its forms. That said, we see the need to course correct here. As always, if you folks who are involved enough to provide this level of detailed feedback want to write something, email me at pitches@stackoverflow.com. Or if you think someone would make a good contributor, send them along to me.

I am a Rust subject matter expert, and I would like to further substantiate the erratic nature of the blog with a few more issues I encountered.

The computer memory allocated to running programs is divided into the stack and the heap.

Even if we discard the conflation between a literal and a primitive piece of memory, it seems to disregard that a process contains more memory segments than just stack and heap, and that something like the string below could reside in a static, read-only memory segment.

In any case, the Rust Programming Language book provides more solid definitions of stack and heap.

If a variable is assigned to a new owner, then the original value gets dropped, as it would now have two owners.

That is inaccurate. The compiler does have the concept of moving a resource, so a typical assignment would not "drop" the original value. At best, it would invalidate that variable for further use.

It is not that the author is oblivious of the concept of moving a resource either, as that is further explained some sections later. It is possible that another conflation took place between variable bindings and values.

To allow programs to reuse code, Rust offers the concept of borrowing, which is similar to pointers.

OK, I may be picky here, but saying that "borrowing is similar to pointers" is a severe undermining of the borrowing system. If the target audience intended was the overall developer base, portraying borrowing as "creating references with extra guarantees", or even just as "similar to references", would have been much better.

This signature does not follow idiomatic guidelines for passing sequential data to a function, something which anyone sufficiently experienced in Rust would know. The signature below is simpler and works for even more types of inputs.

The subsequent example of mutable borrowing:

...just makes no sense at all! It does not make it clear that a mutable borrow already "returns" the value back to the owner, even if you do not return it again. It passes along a mutable reference to the caller when there is hardly a need for that.

A proper, idiomatic way of writing this function and explaining mutable borrowing would be:

And with this you would be able to write this:

Has the post been subjected to any kind of proof-reading?

If everything was perfect with Rust’s borrow checker, other systems programming languages might switch or offer releases with an implementation of a borrow checker. On the subject of memory management, it’s a trade-off between user experience and convenience.

These sentences leave the impression that borrow checking is a feature that a language development team could add on top of most systems programming languages if they just wanted to, which is very misguided. Even the latest efforts in C++ to better diagnose resource misuses (namely the Lifetime profile specification) cannot go as deep as Rust goes, because that would have required a non-backwards-compatible overhaul of the type system.

And this section continues with other phrases which are either vague, unclear, or just downright misleading.

As program size grows, it may be difficult to self-ensure the ownership rules, and making changes may be expensive.

I would be surprised if there was a strong correlation between code size and difficulty in satisfying the borrow checker. These difficulties emerge as you try to express more complex data structures and algorithms, not exactly when the program size increases. Further down the same section, it becomes clear that the author meant something else when saying "as program size grows":

Many developers, from beginners to experts, get ownership errors from the borrow checker, with more errors coming from implementing complex data structures and algorithms in Rust.

"Expensive" could also mean a lot of things, but most of the time the only potential cost is in compilation times, unless the recourse was to clone many values around or encapsulate values in reference-counted primitives. Maybe I'd let it pass.

While the Rust compiler prevents mistakes like dangling references by performing checks, Rust also provides an unsafe keyword for developers to leave the block unchecked.

This is one of the biggest misleading sentences about Rust that you can find out there, and it's appalling that Stack Overflow is contributing to this misconception. Let's be clear here: The unsafe keyword does not disable nor relax the borrow checker. Rather, it lets the developer do things that the compiler cannot ensure that are safe.

It may seem subtle, but it makes a huge difference. Wrapping a piece of code around unsafe does not suddenly make it ignore borrow checking. Rather, it lets the developer do, among other things, the dereferencing of raw pointers. As raw pointers are more akin to pointers in C, they hold no lifetime information, nor do they guarantee that they actually point to something valid.

This could be detrimental to code security if external dependencies use the unsafe keyword.

I too find this phrase confusing. What I can say is that each unsafe block could indeed be an open door to memory-related vulnerabilities. When projects depend on unsafe, developers are advised to carefully document each occurrence explaining how the necessary conditions for safety are fulfilled. Libraries depending on unsafe may typically include other forms of testing to detect misuses (such as running tests on an interpreter, or with memory sanitizers). Still, most projects do not need unsafe, and its use is preferably kept reserved to places where it is absolutely needed. My biggest Rust project, comprising 16 crates over 30k lines of code, uses no unsafe blocks directly.

Not sure if this changes the overall interpretation of the sentence. I still consider the poor wording of the previous sentence about unsafe a much greater peeve.

All of this to say that the folks at Stack Exchange Inc should probably take better care when looking for writers for their blog, as well as when reviewing the content for both technical accuracy and readability. We can't downvote these blog posts, which makes things worse.

In this case, I wonder if you had just considered inviting Jake Goulding for another blog post on the subject, whose knowledge on the topic is quite well proven.

Not the answer you're looking for? Browse other questions tagged discussion status-completed blog accessibility the-overflow .