I was wondering if, when I say search using Google, the results I see that point to StackOverflow trilogy sites are influenced in any way by the votes we make. I don't know much about these sorts of things so it may well be a completely obvious answer to everyone else. I understand that back links to questions and answers is used to rank results but it would be great if the efforts we've made to vote on items is also taken into account.

Does anyone know if votes have such an influence on search result rankings? And if not, is there any way that this could be achieved?

The search results are very likely influenced by votes.

The answers with more votes get promoted to the top of the page. Search engines usually put more weight on what they find closer to the beginning of a page rather then at the end of it.

For instance, if you asked a question about jobs and career, somebody made a funny answer about ponies and it somehow got upvoted to the top, the question will be indexed and categorized as related to jobs with ponies. Especially, if there are follow-up comments mentioning ponies as well.

P.S. Did you notice there is a trend lately with all those ponies. People mention ponies everywhere, create nick names with ponies in it, joke about ponies, ponies this and ponies that. I mean, what's up? Is this a year of the pony or is somebody crazy about ponies or what?

UPDATE: Now, only 6 hours later, this question rates high for ponies in Google: 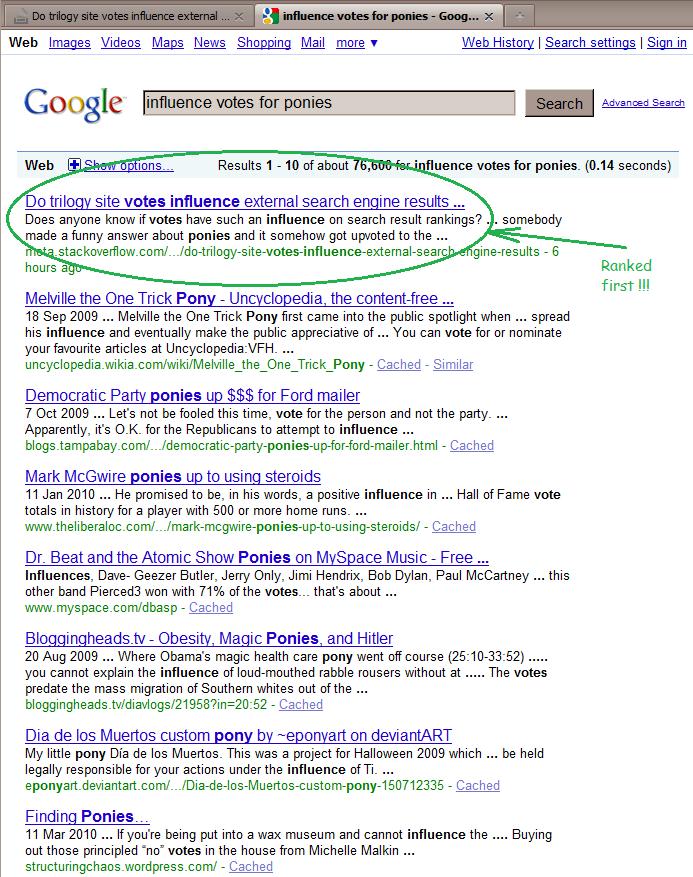 No, the number of votes does not influence the search results.

And I can't think of a way to achieve this, except for contracts/agreements with google.

I don't think the site's owners have any possibility to "prioritize" the way their pages are indexed - except for building artificial obstacles to the indexing of low-vote questions which no sane site owner will do.

As long as there is no all-encompassing Google toolbar-like programm counting people's actual visits to specific pages, and sending those results back to the search engine (and I hope this doesn't come true on a large scale), the only way I can see would be the search engine taking voting into considerations. Maybe they will do this one day (I think it's highly likely), or maybe they're already at it. I doubt, though, that we will be informed in detail if they are.

Not the answer you're looking for? Browse other questions tagged discussion voting search .

27
How does a down vote affect SEO for stack overflow?
847
The Many Memes of Meta

97
Should we reduce rep bonus for upvotes on posts with a negative score?
8
Metadata in Google Search results
237
A new search engine for Stack Exchange
225
Link up the excellent search engine that gives “Questions that may already have an answer” with the search box
325
Stack Overflow is getting a Meta of its own
415
Can a machine be taught to flag spam automatically?
2457
Firing mods and forced relicensing: is Stack Exchange still interested in cooperating with the community?