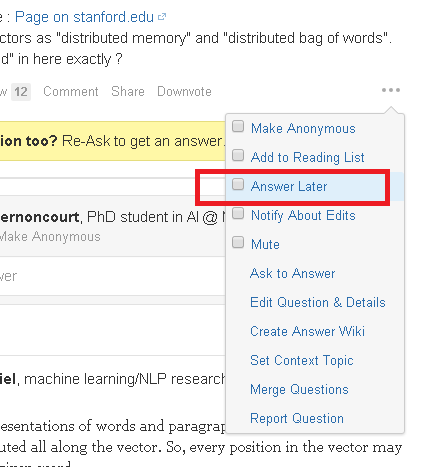 Not the answer you're looking for? Browse other questions tagged feature-request questions bookmarks .

0
Feature Request: Answer a question later
924
Why aren't people voting for questions?
262
Allow questions to be saved as drafts prior to posting
116
Better bookmarks (formerly called favorites) organisation
29
Personal history of recently viewed questions?
22
Save questions to visit later, but not exactly 'favourite' them
7
Allow marking a question for answering later on the apps

853
Can we have the ability to retract a close vote before it closes?
994
Show all of my question/answers to me even if they are deleted
720
How do I get attention for one of my own questions without a good answer?
924
Why aren't people voting for questions?
1494
Fastest Gun in the West Problem
401
Add a way for moderators to cast a normal, non binding close/open vote
603
Exit strategies for "chameleon questions"
129
Favorites improvements - search, categorize, personal tags, add note, favorite answer
1250
Don't throw away all votes when a user is deleted