What percentage of Stack Overflow users have over 10,000 rep? [closed]

Ask Question
Asked 11 years, 8 months ago
Active 5 years, 11 months ago
Viewed 922 times
3
Closed. This question is off-topic. It is not currently accepting answers.

What percentage of Stack Overflow users have over 10,000 rep?

You can also use this query I just wrote, showing count of users per reputation digits: 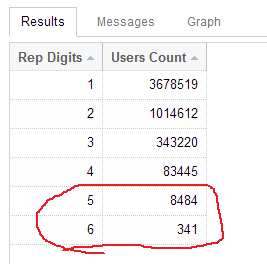 This is only useful as a measure of active users, and there's no real way to determine that outside of being on the dev team. But we can use reputation to make a guess and filter out users who don't have at least 103 rep (100 rep bonus for cross-registering + downvote/upvote trick for new users). That returns about 1.5%

Refer to the "Total Reputation" table in the right sideboard about 1/4 of the way through the stackoverflow reputation leagues webpage. (Of course this resource was not available when the question was asked in early 2010; the leagues started a few months later, as noted in a 12 August 2010 blog entry.)

Here's a SO Query to give you number of users with 10k reputation or more.

Click the Messages tab after running the query to view the total number.

As of this writing there are 8,823 users with 10k or more reputation.

Not the answer you're looking for? Browse other questions tagged discussion reputation statistics .

20
Will there ever be an offer like the Telerik promotional free controls?

1476
Fastest Gun in the West Problem
1832
Could we please be a bit nicer to new users?
836
What does "user was removed" mean and why did my reputation change because of it?
534
The MIT License – Clarity on Using Code on Stack Overflow and Stack Exchange
2784
A Terms of Service update restricting companies that scrape your profile information without your permission
827
Net Neutrality and Stack Overflow / Stack Exchange
2482
Firing mods and forced relicensing: is Stack Exchange still interested in cooperating with the community?
2223
Stack Overflow is doing me ongoing harm; it's time to fix it!
1558
Thank you, Shog9