How does accepting an answer work?

For more information, see "What should I do when someone answers my question?" in the Help Center.

What does it mean to accept an answer?

The system allows you to mark an answer as "accepted", in order to indicate which answer solved your problem or most thoroughly answered your question in the end. Accepting an answer is beneficial as it rewards posters for correctly answering your question and informs others that your issue is resolved. On most sites (except Stack Overflow and some other sites), it also pins the answer to the top so others reading your question read that answer first.

How do I accept an answer, and what are the rules?

To accept an answer, click the "checkmark" button underneath the vote buttons: 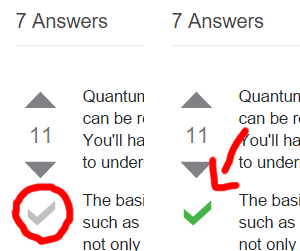 Can I accept my own self-answer?

Yes; if you've self-answered your own question, you can mark your answer as the accepted answer. There are some differences, though, that exist in order to ensure everyone gets a fair shot at answering:

What are the reputation benefits?

Which answer should I accept?

Should I upvote the accepted answer?

If an answer has helped you solve your problem and you accept it, you should also consider voting it up if you have the reputation. If other answers have been helpful too, you can also vote them up. Unlike accepting an answer, you can upvote as many answers to your question as you like.

What should I do if none of the answers are suitable?

Accepting answers that are posted while the question has an active bounty will create special cases for automatic awarding should the bounty owner not manually award a bounty at the end:

Additionally, in the past, the bounty system was strictly tied to the answer accepting system: accepting an answer would also require awarding an active bounty. However, the two systems are now entirely separate.

22
Accepted answer appearing below top voted
5
How do I accept an answer -- where do I click?
5
How mark my question as answered on Stack Overflow?
22
Responding to comments about 0% accept rate when I have no satisfactory answers
10
How to accept the answer on Stack Overflow
5
Accepted answer does not always appear at the top
11
Is it okay if I don't accept an answer even though the answer is correct?
4
How do I accept an answer to my questions?
9
I feel bad about not accepting answers
3
When someone answers my question correctly and completely, what should I do?
See more linked questions

517
How does deleting work? What can cause a post to be deleted, and what does that actually mean? What are the criteria for deletion?
730
How do I get attention for one of my own questions without a good answer?
580
How does "Reputation" work?
651
Are answers that just contain links elsewhere really "good answers"?
1053
What are "Community Wiki" posts?
606
How does the bounty system work?
803
Recent feature changes to Stack Exchange
572
What is serial voting and how does it affect me?
693
What is the association bonus, and how does it work?