Proposal for a new voting system on Area 51 [Now with PICTURES!] [closed]

Ask Question
Asked 10 years, 1 month ago
Active 3 years, 4 months ago
Viewed 627 times
19
Closed. This question is off-topic. It is not currently accepting answers.

Seeing the recent discussions on the voting system (too many to link them all here), I think I've found the main source of confusion here: mixing the quality of a question with its "on-topic" or "off-topic" status. While in a real, live SE site off-topic questions would by definition be "bad" and thus they would be downvoted and/or closed, this is not the case for Area 51, where off-topic examples are as important as on-topic ones, if not even more. I think these two concepts, relevance and on-topicness, should be decoupled.

The Area 51 site is the only known (for now) Stack Exchange site whose voting systems works differently from the other ones, as a question can be voted in two different ways (on-topic or off-topic), but both kind of votes will give it (and its author) a score boost; this is not the most intuitive way for it to work, as people will tend to mark it as "on topic" or "off topic", but will often neglect the fact that by the very act of doing this they'll be raising the question's relevance as an exemplary question for the proposed site, and the author's reputation at the same time.

In order to make things more clear and usable, ease finding good and relevant questions and have users' reputation actually reflect their contribution to the community, I thus propose the following voting system for Area 51 questions (which are actually answers to site proposals, but let's not dwelve in this too deeply, as there lies madness):

I think this could totally solve the problems we've been experiencing.

Here's a preview of how this voting system would look like: 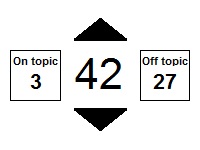 I feel it's a lot more intuitive than the current one.

I feel it's a lot more intuitive than the now current one, too.

The original voting system has been changed, and I just feel the new one is a turn for the worse; and, judging by comments and discussions all over this Meta site, looks like I'm not the only one with this feeling. I still strongly believe the system I'm proposing here would be a better way to manage Area 51 voting, for three main reasons:

Another one of the many problems this voting system would solve is also the "vote on your own question" one; the question author could freely state if s/he thinks the question is on- or off-topic, without of course being able to upvote it.

I like this because (obviously) it mirrors the existing sites.

I think your proposal has some merit and does speak to the premise that was raised in another question's answer that "artificially rate-limiting an activity won't get people to do it better, only less". However, I do have a concern that while your proposal is quite logical, that it may have a human factor "usability" issue and whether new users would be confused by the two axis of voting. For example, would people be inclined to down vote good off-topic questions perhaps!?

In any case, I think the new Meh voting option as a third choice (on-topic, off-topic, or Meh) essentially accomplishes what you want to do in your system:

Perhaps your main issue at that point is simply the on and off topic vote limiting!? I suppose the notion of whether or not vote limiting is actually needed with the "one of three" voting system is a valid question....food for thought.

The voting on area51 must necessarily be different than on the other sites.

By "mixing" the two very different styles of voting, I suspect we will end up with even greater confusion, especially since one axis is utterly useless during the proposal phase. There is absolutely no reason to be voting on the question itself, and since the question consists only of a title it won't even be similar to how that question might be voted on a real stack exchange site where the body gives the "real" question, while the title is merely a brief descriptor for the real question.

I just don't see the reason for the up/down vote. The on-topic, off-topic, and meh votes are exactly what's needed to define the site.

Please don't add clutter to it, especially clutter that makes people think, "Oh, it's just a normal SE site with up and down voting."

It's not. It's completely different.

Oh, well, it's useless to bother anymore, I suppose... looks like community feedback was not so needed before implementing the new voting system, after all.

Let's just hope I'm wrong here... but yet, nobody seems to be actually caring :-/

At least there's some discussion going on, finally :-)

Not the answer you're looking for? Browse other questions tagged feature-request questions voting area51 .

107
How can I propose a new site?
19
How can we get better quality on- and off-topic questions in our site proposals?
19
What is the SE team's response to community feedback on the new Area 51 voting system?
6
Area 51: A haven for trolls?
11
The graphics of the new voting system need improvement
1
Marking questions as “potentially on-/off-topic”