Tags: Adding tags before title of the question

As of now, the user has to enter a title, question, and then the tags. When the user enters the title and tabs out, we see a list of similar questions. However, I could be asking a question related to C# and all the entries might show up for Ruby on Rails. 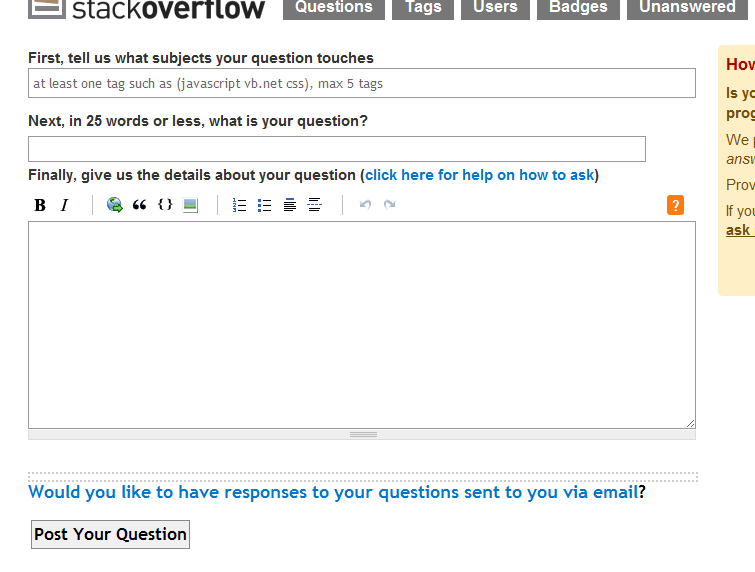 From my closed-as-dupe question where I expound about how awesome this would be:

We move the tag editor right smack up top. Blam. It has a few benefits that I can think of:

Some of the downsides of this:

So, what are the chances this will happen?

I like this, and it may stop people writing tags in titles too.

This is a move in the wrong direction. If anything, the title and tags fields should come after the post body.

I find that many users, myself included, occasionally write tags and titles that don't fit their questions well. There are many possible reasons for this, including

Back in school, I was taught to write titles for essays last. That way, they would match what I actually wrote, rather than what I initially thought about writing. For similar reasons, newspaper headlines are generally written by editors towards the middle or end of "layout time," not by reporters at "write time."

I've already stopped following the layout of the ask page when I ask questions. I write the body first, then enter tags, and save the title for last. Doing this has improved the quality of what I post and the responses I get (in my opinion, of course).

The obvious flaw here is that people could waste time writing duplicates that would have been found by the similar title search. However, the title search does no good if it's searching on a bad title. I would like to see numbers on how often that feature actually works, although I have no idea how to collect such data.

I like this idea. In addition to some of the other benefits already mentioned, it could potentially reduce dupes.

I just did a quick test on SO to see what suggestions would turn up for the title “how do i save a file on the server?”. (No, I didn't post it. I just wanted to see the Questions with similar titles list). At the very bottom of the list I found how do i save a rtf file using php?. Assuming I want to know how to save a CSV file using PHP, that list seems to suggest that no such question has been asked. Now, if I change my title to “how do I save a csv file in php?” I see that question has been asked quite a bit.

Using appropriate tags in conjunction with my original title reduces the chance of dupes, removes tag names from the title, and shortens the title drastically.

Unfortunately, there’s no way to test what advantages or disadvantages such a change could produce without actually trying it. A trial run would produce more useable results.

I'm not saying we are not going to do this ever, but conditions would have to change pretty substantially for us to consider it..

The main reason is that our tag suggester has been very successful, and placing the tags before the question would mean that we would have to remove the tag suggester completely.

7
Make tags the first thing you do rather than the last thing
69
How to save the world... One question title at a time
12
Can the Ask Question page be changed to obtain better quality questions?
15
Automatic removal of bracketed tags from question titles
16
Would it be feasible to tie the tags of a new question to the Related Questions list?
5
Encourage more meaningful titles by putting the title text box below the body of the question
7
When Asking a Question, show Information that tags in Title are not welcome
5
"Questions with Similar Titles" Could Do Better
3
Can we automatically detect discouraged patterns in question titles?
0
Should removing of tags from question Title be encouraged?
See more linked questions

856
Can we have the ability to retract a close vote before it closes?
870
Allow an edit to notify downvoters: "I think I've fixed the issue now - please check"
995
Show all of my question/answers to me even if they are deleted
1900
What is the XY problem?
450
Reward finding duplicate questions - +10, +2, -5
420
Decision on rejected edits should be displayed as a notification to the editor
260
A real solution to ambiguous tags
206
More descriptive "User was removed" explanation
301
Add optional box for spam flags letting you say why you think it's spam