How is the commit percent decided for Area 51? I know it is based on rep, but how exactly does it work?

In the first round, we only want to launch sites that will DEFINITELY succeed. So we require (1) lots of users, and (2) lots of users with high rep, because we know that those users contribute a lot and know how the system works. The formula right now is weighted heavily towards those people.

Once we have more data from some successful sites, we'll start to loosen it up a bit. Right now we really don't know if 200 committers with 1 reputation means 200 users on day 1, or 20 users on day 1. We're going to be fairly cautious with the first sites and gather as much data as we can with them.

With that caveat, the formula we use right now works like this: We give each user a "score" based on how likely we think they are to contribute to the site. It's a bit kludgey right now because we don't have a whole lot of data. The one piece of data we have that tells us a lot and is hard to game is a user's reputation on the existing sites.

Here's the formula we have right now. It's almost certainly wrong and we'll be tweaking it as we go:

where SUM is over each site a user has an account on, and DAYS is the amount of days since they first committed to the proposal, or visited the proposal after committing.

To get a feel for it:

Note that you cannot see your own commitment score (but you can calculate it on your own), neither can you see the exact value of the total commitment score (you can only see the percentage, which is divided by 5 and rounded down).

We've tweaked the formula a few times since this was originally posted, based on the data from the first site betas. I've corrected the formula above to be the very latest. In general, we've tweaked the value of high-rep users downwards since they don't seem to be that much more likely to contribute, and given brand new users a bit of a boost as well.

The final commitment percentage of a proposal is equal to the MINIMUM of these three numbers:

Put another way, every proposal that launches must satisfy these three criteria:

Here's a confusing graphical way to see how much any one committer contributes towards each of those three criteria: 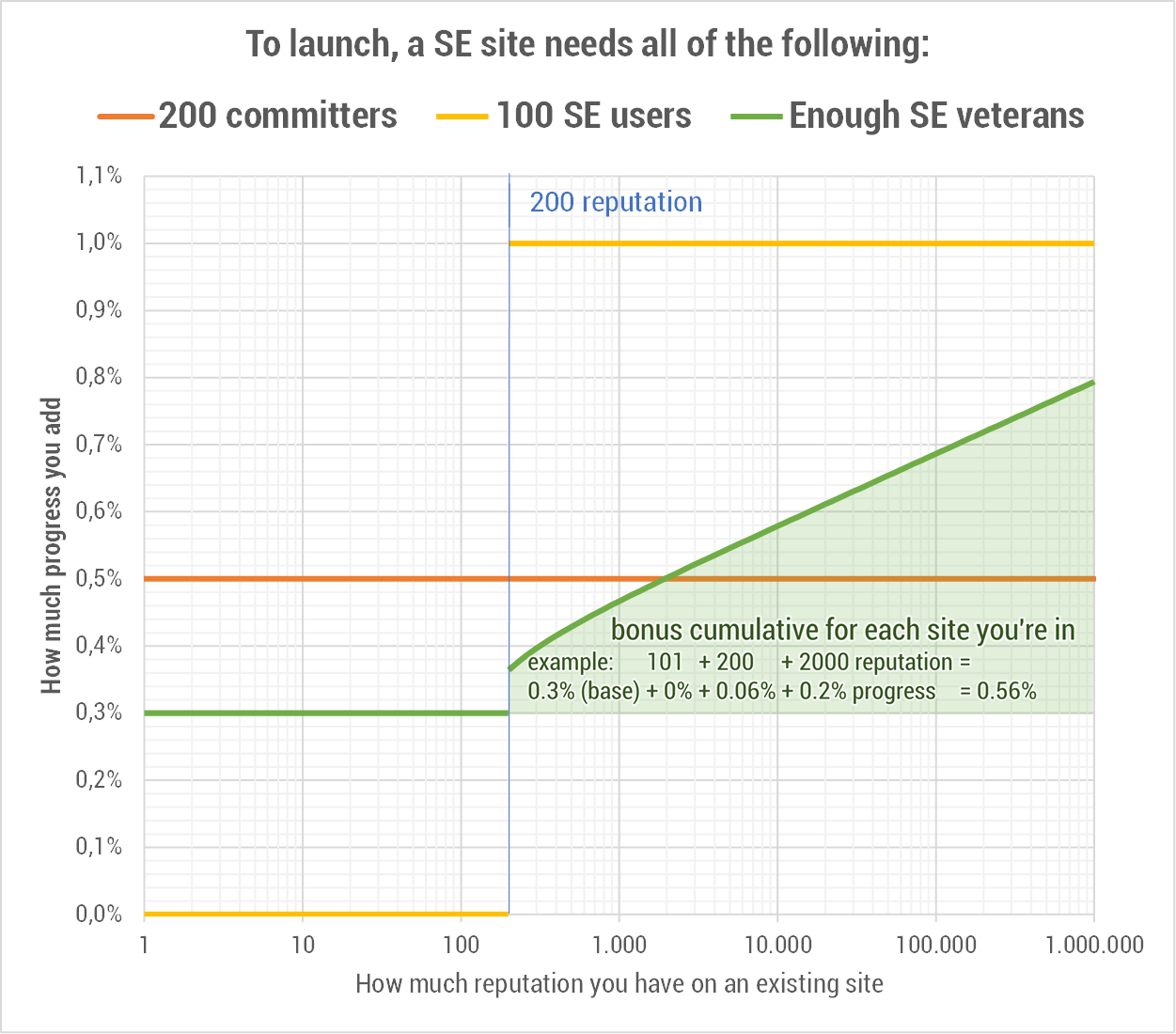 As of April 5, 2011, we've added a decay factor to commitment votes on Area 51. This applies only to the Commitment Score portion. Basically, the older a vote is, the more it decays. This is very gradual: something like 10% over 6 months. If a user is very committed, they can "renew" their vote by visiting the proposal while logged in.

It's not (just) the total reps.

Probably the percentage is a mixture of people count (41 for Gaming, 26 for Apocalyptic Defense) and total rep.

Edit: Based on @David's answer, I've calculated the total user score for:

Hmm the ranges do not intersect. But it seems 2,000 is the answer.

on each page. The lists are summed, divided by 10, and the total number of committers are added to it.)

In the first round, we only want to launch sites that will DEFINITELY succeed. So we require (1) lots of users, and (2) lots of users with high rep, because we know that those users contribute a lot and know how the system works. The formula right now is weighted heavily towards those people.

Once we have more data from some successful sites, we'll start to loosen it up a bit. Right now we really don't know if 200 committers with 1 reputation means 200 users on day 1, or 20 users on day 1. We're going to be fairly cautious with the first sites and gather as much data as we can with them.

The WordPress Answers proposal is one exception. A lot of people came over from the wp-hackers list on WordPress.org when I announced it, and as such, only have 51 rep. The comments show great activity potential, but the rep shows almost none. This is, of course, the ultimate goal, to bring in outsiders.

Almost all users who followed it, already commited, so I'm not sure if this will grow higher.

The following Python 3.x script can be used to compute the commitment percent based on the new formula. The scores of the 3 criterion will be emitted in the end, showing what kind of users is needed to improve the percentage.

From a few proposals I have tested on, it turns out the strictest criteria is "100 committers with at least 200 rep on a single site".

1
Why do some sites require more commitments than others to launch?
0
How is commitment progress calculated?
77
What can be done with Area 51?
43
How can we make good answers to old questions float to the top?
24
How should "critical mass" be calculated?
19
How should a new site with a good userbase *outside* the Stack Exchange mainstream get itself bootstrapped?
28
Refresh Area 51 commitment when user visits proposal site
13
What currently makes an Area 51 proposal successful, and what should make it successful?
17
What is the Total Reputation field on Area51?
11
Commitment loss at Area 51
See more linked questions

648
Are answers that just contain links elsewhere really "good answers"?
928
Why aren't people voting for questions?
1849
Could we please be a bit nicer to new users?
2794
A Terms of Service update restricting companies that scrape your profile information without your permission
829
Net Neutrality and Stack Overflow / Stack Exchange
2515
Firing mods and forced relicensing: is Stack Exchange still interested in cooperating with the community?
993
Firing Community Managers: Stack Exchange is not interested in cooperating with the community, is it?
806
Thank you, Robert Cartaino