What is this Stack Overflow offline page all about? 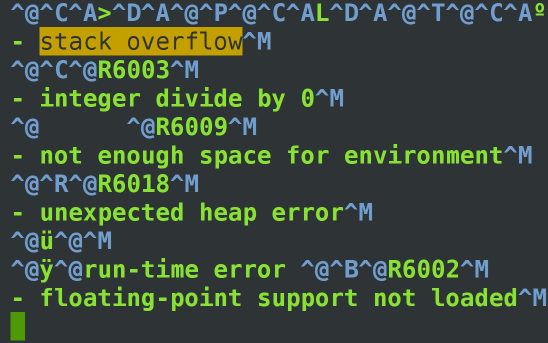 I don't understand the page.

This is roughly what you'd see when you open an old MS-DOS program (.exe) in a text editor. They scrolled the page until something recognizable showed up. Which are the runtime errors that the Microsoft C-runtime can show when it has to abort the program due to an unrecoverable error. Like a stack overflow.

The editor has a bit of trouble with some of the bytes in the file that are control codes in ASCII. Showing them with a ^ followed by a letter that's the code + 0x40, an old convention. So ^@ is 0x00, ^A is 0x01, ^C is 0x03, ^M is 0x0D (carriage return), etcetera. It displays 0x0A as-is, interpreted as a line-feed that terminates the line. Which gives clues to the editor's origin; it is a Unix editor. One way in which Unix and DOS/Windows are famously incompatible, a line-ending in Unix is "\n", but it is "\r\n" in Windows. Noted by @badp, the color scheme suggests gedit was used.

Some of the runtime errors are still defined in modern Windows C/C++ programs that were built with Microsoft's C compiler. Like R6018. But not a stack overflow any more; that's handled by the operating system today. Exception code 0xC00000FD, STATUS_STACK_OVERFLOW. Don't bother sending the error report to Microsoft; they already have a billion of them.

Ages ago, error codes were defined in file cmsgs.h for Microsoft's C compiler. I am talking DOS here...

I am not sure if this is the correct reference, but it is anyhow close.

It looks like they opened a random .exe in Vim, searched for "stack overflow", and took screenshots with various colorschemes.

It reminds me more about the old Apple ][e, when booting, displaying a screen of random characters, with ^@ for zeroes...

Not the answer you're looking for? Browse other questions tagged discussion stack-exchange 500-server-error .

0
Bug: stack overflow on stackoverflow. How ironic
246
Can we prevent some of the low-quality questions from entering our system?