I think the tooltips for chat room posts can be improved

Can this be improved?

Cross-posting my answer from Gravatar bugs and improvements in Chat

I'm not quite sure why, but I think the chat controls would feel more natural on the right, rather than the left.

My idea, as seen below, would be to move the arrow thing to the right side of each chat "bubble". The controls would appear on mouseover, like now, but we could star or flag right from there (the most common tools) without having to have a second window to do that in. The arrow would let you open the window to access other controls, permalink, etc.

On your own posts, which you can't flag or star, you could change the controls to edit/delete, as those are the most common things to do on your own posts.

If you don't do this, at least close the pop-up window when I click in the text entry field, rather than make me aim for the little gray close button.

One option is to make the entire post clickable, and under the post will appear a row of tools, perhaps similar to how google reader works? 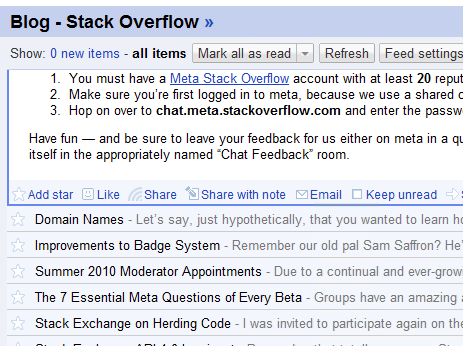 Not the answer you're looking for? Browse other questions tagged feature-request usability chat .

20
Please move the chat post controls to the right side of each post
129
Can I please be trusted to not to script a bot that dumps an endless stream of spam messages into the chat?
390
Add an “I don't understand” option for review audits
163
Flags in chat are defective by design
38
Chat room stars, personal vs. room
322
Toward a philosophy of Chat
99
Test the new mobile chat!
186
We're more aggressively enforcing self-moderation in chat