What are the criteria for questions to be selected for Hot Network Questions?

I really like the new Stack Exchange home page, where certain questions from the Stack Exchange Network are presented, along with a hotness rating that is described as "arbitrary" in its tooltip. Such questions also appear randomly on the sidebar on sites across the network, under the heading "Hot Network Questions".

How do these arbitrary hotness points work, and how are they used to select questions to appear in those lists?

Basically the same formula used to select the questions shown in the "hot" tab on a site.

We have a few tweaks:

The core of the formula (without the site-based degrading or traffic scaling) is:

Once a question reaches a threshold hotness score, it will be selected to appear on the list. No questions will be selected if the site has already contributed more than its limit of questions. This is recalculated every 15 minutes. The entire list is shown on stackexchange.com, and the results are randomized when displayed on sidebars.

Based on David Fullerton's answer, I've written a simple user script that adds a "hotness" indicator to the question infobar:

The "hotness percentage" calculated by the script is simply the raw value given by the "core formula" in David Fullerton's answer, times 100%. It does not include the per-site adjustment factors or the cumulative penalty for multiple questions from the same site, and so is not directly comparable across sites or with the "arbitrary hotness points" shown in the tooltips on the SE.com home page.

In practice, it seems that questions on the Hot Network Questions list tend to have hotness values around 20% to 200% or so, whereas most not-so-hot questions tend to score a flat 0%. For a more detailed score, you can hover your mouse over the percentage to see the raw hotness score rounded to 5 significant digits. For example for this question, as of this writing, the raw hotness score is approximately 0.000016216 (although posting this answer should bump it up a little bit).

As of version 0.4, the script will display the hotness percentage with overstrike for questions that are ineligible for Hot Network Questions for some reason that the script can determine (like this one, since it's too old and on a meta site), and will show the specific reasons in the hover tooltip. Note that the script will not check for manual exclusions or previous HNQ appearances, since that information is (as far as I know) not directly available from the question page itself, and it cannot check for blocked title keywords since the blacklist is not public (and can vary between sites). Also as of version 0.4, the script calculates the hotness score for questions less than 8 hours old as if their age was 8 hours, which should give a reasonable estimate of what their hotness will be once they're old enough to become eligible for HNQ (at least as long as their answer count and vote totals don't change too much in the mean time, of course).

The following experiment highlights some of the dangers of using the formula in David Fullerton's answer. First let's make sure the experiment is careful not to be affected by all the caveats mentioned before the formula. I've only considered questions of the following type:

Looking at the 7 HNQ at the bottom of rene's web app, we have the following, ordered from highest to lowest in score on rene's app, which gets the data from the source used by the mobile apps to show "hot" questions: 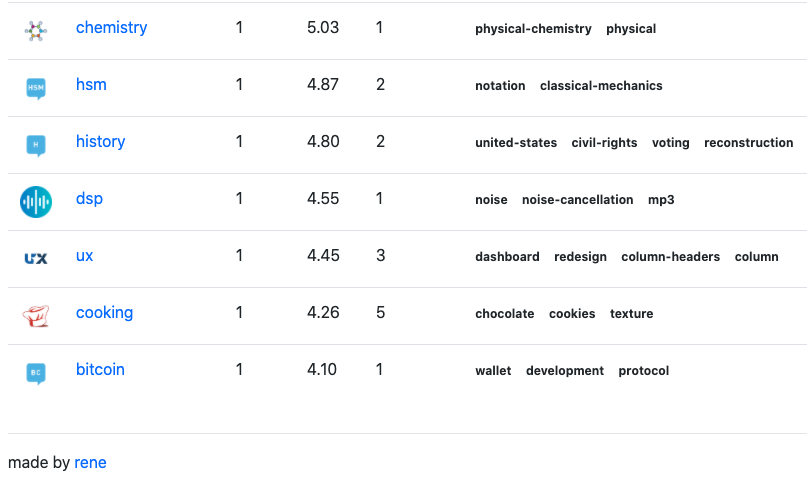 The non-integer numbers in the above screenshot, are the "display score" values, and will be repeated in my last column below, and clicking on the site name will give the specific question that's being discussed:

Bitcoin has the lowest display score, but the highest score from the formula (perhaps it's one of the "limited" sites that we don't know about). Chemistry has the highest display score, but the second lowest score from the formula (this would mean that at least 5 out of these 7 sites are "limited", but while it makes sense to me why Bitcoin.SE might be limited, I'm a lot more surprised by DSP, UX, and Cooking being limited). 1.5 hours later the list has changed a bit: 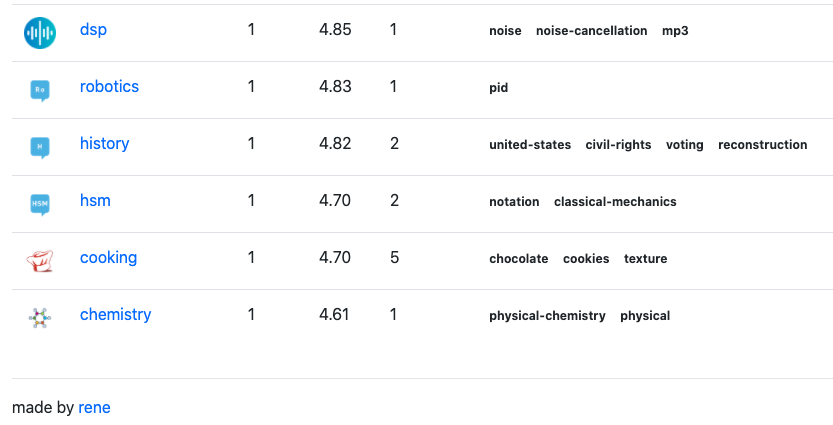 This again indicates that Bitcoin is "limited". It was not removed by a moderator. Chemistry is now at the bottom in terms of display score and formula score, which means that if 5/7 of these sites are limited, they weren't limited enough to keep Chemistry suppressed in this hour, but were limited enough to be suppressed by Chemistry in the previous hour. Cooking again seems to be quite limited. UX is now highest for display score and third lowest for formula score, which does look like quite the anomaly.

One last screenshot from 30 minutes later shows that UX is now out and it was not removed by a moderator, after having the highest display score in the last screenshot. Chemistry was also anomalously high before sinking to the bottom, so maybe questions get a boost in Display Score when they are on the verge of getting kicked out of the HNQ list:

Not the answer you're looking for? Browse other questions tagged support stackexchange.com hot-questions faq-proposed .

68
Prevent specific sites from being overrepresented in the hot questions list
9
Is it possible for an old question to get on the hot questions list?
18
Was this epic answer from Scifi & Fantasy SE manually added to the Hot Network Questions?
6
How are SE-wide Hot Questions selected?
4
How are Hot Network Questions selected?
4
An HNQ that's 21 days old?
3
Can questions only appear in the HNQ list once?
3
How can I check how hot a question is?
2
How is the hotness of a question determined on stackexchange.com?
2
What makes a question 'hot'?
See more linked questions