Here's something silly I noticed:

I'm sure there's a great programming reason why that doesn't say 2 years, but it is probably confusing to most people.

Added image for posterity, since the problem should be gone soon: 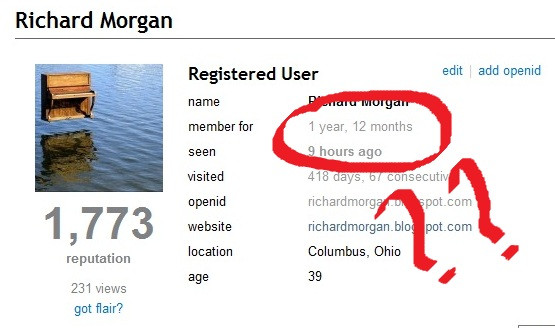 bug status-completed profile-page
Share
Improve this question
edited May 23 '17 at 12:35

Well, I haven't been proven wrong yet, so I'm going to upgrade my comment to an answer.

My interpretation is that the "Years" calculation cares about how many full years have gone by since registration, so you need to actually pass the specified date that you first started. However, the "Months" calculation doesn't care about actual months, but simply 30 days. So when you are in the narrow period of time between 360 days from the start date and your next anniversary, then it will display "1 year, 12 months".

This bug appears to always happen in near proximity to the actual date of 2 years. Thus far it has always been brought up within 3 days of the date, but my expectation is that it will extend to be within 5 days. I have no clue how a leap year will be treated, especially if you registered on the 29th. We'll have to wait until 2012 for that, though, I imagine.

It's confounding, but it's the most plausible explanation I can think of for why this is happening, from a coding standpoint. Months are stupidly inconsistent in their lengths.

Decided to plume through the Stack Overflow users sorted by "oldest". The boundary appears to be based entirely on the day, as the turnover time is at Midnight UTC instead of mattering what the current time is compared to the time of registration. It does appear to be a 5 day span as I predicted, but mysteriously it starts one day later than the current day. For reference, this data was compiled when:

The immediately following user, CJCraft.com, marks the start of our buggy displays by being a member for

On the other end of the scale, our span of 1 year, 12 months ends with user [SuperRoach], who has been a member for

The immediately following user is Townsfolk, who has been a member for

We will no longer display weird 1 year and 12 months for the last five days of your year.

However if you were a member starting Feb 1 and now its March 1 we will not account for you being a member for 1 month.

Similarly on leap years we may tell you were a member for a year 1 day early.

Not the answer you're looking for? Browse other questions tagged bug status-completed profile-page .

0
Member For on Profiles Bug
11
The list of all the launched sites uses both “12 months” and “1 year”
7
Member for 12 months?
27
Pluralization bug in “member for” area on profile page
14
Bad rounding for months on stackexchange.com
6
Improve the accuracy of time strings
16
Careers is missing the good parts

183
Every “close” has its thorn: replace “close” with “on hold” for the first five days
361
New three-tiered badge idea: Explainer →Refiner → Illuminator
131
Profile Page Makeover, Part 3: the Prototype returns
304
We're working on a new stat to help convey the reach of your posts here
159
Writing.SE clamours for graduation
144
Who is the intended audience for the Stack Overflow blog?
577
We're switching to CommonMark