Using inline code Markdown (backticks ``) in comments and following it immediately with a non-whitespace character breaks the Markdown causing the backticks to appear and not having the stuff inside the backticks interpreted as code. Strangely this behavior does not appear within posts and answers:

It's becoming slightly annoying because a) the behavior is inconsistent and b) I refer to HTML elements as plurals like <br>s and <li>s, and now I have to insert an entirely useless space between them that when read makes it look weird.

Edit As the faq suggest, I should update my post with information on how I attempted to solve the problem myself if nobody takes notice. So, here I am bumping up this post. Oh, and freehand circles: 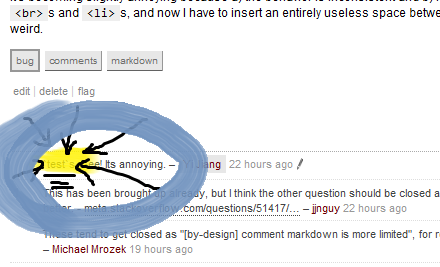 As you can see, the new version of Paint included in Windows 7 takes it to a whole new level.

Not the answer you're looking for? Browse other questions tagged bug status-completed comments markdown .

26
Can we please have a place where changes to the markdown syntax are documented?
3
What happened to comment formatting?

533
Cancelling upvote on comment?
262
How to nest code within a list using Markdown
322
Inline links in comments
616
How do comment @replies work?
858
Is there Markdown to create tables?
476
How do I escape a backtick ` within in-line code in Markdown?
494
Implement ```-style (fenced) Markdown code blocks
13
Please put the information about how to escape backticks in the main syntax help page
8
Backslashes after each code block example when answering