First, let me state I don't use twitter, so perhaps to an every day twitter user this would have made sense.

The following is a screenshot of a onebox'ed twitter link:

Where do I click to see that tweet in context? I checked in the following locations, in the order of:

Of course the tweet was still shown out of context (because that's really what Twitter is, quotes out of context), but the point is the link to see the original twitter is almost impossible to find and doesn't really make sense to non-tweeters.

I'm hesitant in classing this is a bug because it's more of a usability issue, but it's the most appropriate tag

That's how it is on twitter.com itself 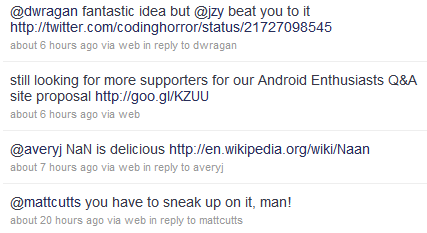 Pray tell, where is the link to the tweet itself in there?

Not the answer you're looking for? Browse other questions tagged bug status-bydesign chat onebox twitter .

54
Which links and sites are handled specially in chat?