Is cross-posting a question on multiple Stack Exchange sites permitted if the question is on-topic for each site?

For example, I have a question that's earned me the tumbleweed badge on SO and I'm not sure what the best thing to do with it is. It's about a web server so it might be answerable on Server Fault but it's really more of a programming thing, hence the posting the question on Stack Overflow.

Is there any way to make the question visible on multiple sites (crosspost) and then accept the answer wherever it came from?

As a general rule: No.

Ask the question on the site you think is most applicable. Each site is focused on a specific topic area and it's important to respect the community. Reading a sample of well-received questions can give you an idea of what's on topic. Look over the site's /help/on-topic guidance before asking, if you still aren't sure.

If your question does not get a useful answer, consider editing the question based on comments and other feedback. If that doesn't help, you can always set a bounty on your question, which will give it much better exposure. This will also mean you have a better chance at getting a good answer.

Occasionally, people are interested in different perspectives on the same fundamental question. There are many Stack Exchange sites with overlapping topic spaces, and it can be useful to get a "second opinion". Even then, however, it's best to tailor your question to each site. Ideally, you should link to the question on the other site and explain what you hope to learn from asking another community.

Allowing cross-posting is a slippery slope.

There are some questions which fall into grey areas between sites, and I think it's OK to ask and delete, then re-ask if you feel you have asked on the wrong site.

If you cross-post a question, make sure the question is tailored to each audience on the different sites and is materially different in each case.

It is also considered good practice to post a link to the other question on the other site, so everyone can see what portion has already been answered and let you know if you've violated the sites no cross-posting policy; which is present on most of the site's per child metas.

But as a general rule, do not cross-post questions, please. Pick a site and go with it.

Just to be 100% clear, copy-pasting a question across sites with no changes is considered abusive behavior.

This is the exception rather than the rule. The question you ask has to be on-topic on both sites.

Again, if it's your question and you want it moved on second thoughts, flag a moderator and request a migration.

If you really think your question belongs on both sites, it probably doesn't.

If you really really think your question belongs on both sites, link the questions to each other. (If it's not your own question on one site, you might just leave a comment.) This way, people won't waste their time duplicating an answer already written on the other site, and people who find the question later can read both sets of answers.

One problem is the wide disparity in attention levels at different sites. Is 39 moves the longest a chess game can go moving only pawns? was posted to Math. I think it is a much better fit for Puzzling, but the activity level at Puzzling is so much lower. Cross-posting would help in cases like this. 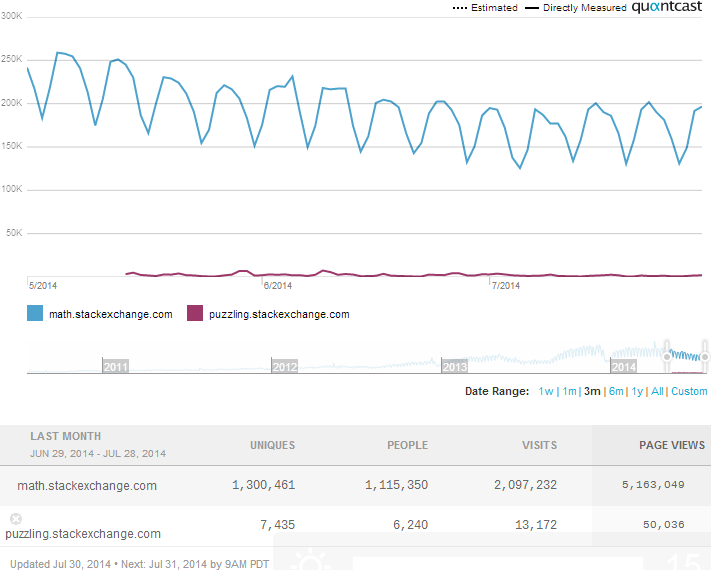 The proliferation of sites (particularly betas) makes this disparity a frequently recurrent issue and puts the growing Stack Exchange network somewhat at odds with a strict policy against cross-posting, especially in the long run as topic overlap increases.

Some wiggle room could help release a lot of this tension. Consider supporting related feature requests (see the comments for many more) and encouraging conscientious cross-posting practices (see @Gilles' answer here and Shog9's here) rather than simple discouragement. If done right, it could help build nascent communities and collaboration among them. To connote more positivity to the productive practice with an alternate buzzword, one could think of it as cross-pollination.

This should help those of you who, like me, couldn't understand why cross-posting is discouraged, when one's intentions are good (an interest in getting the expert opinion of two diverse communities regarding a question that is on topic for both).

I've discussed the no-cross-post debates over the months and I never could understand what was wrong with posting an identical question on two sites when it was perfect for both sites as-is. A question that I thought was fair to cross-post was:

In the edge case where the question is appropriate on more than one site, leave it on both sites and let the users of each community benefit from the information.

Here's the real underlying problem: The SE Network was not designed for duplicate questions across sites. That's the issue to which there's really only one simple solution: don't post identical questions.

Because the SE Network is designed to work as a unified tool, combining questions from all sites, identical posts are oddballs.

With the way the Stack Exchange network features questions from different sites, if we didn't discourage cross posting (even when the question is very much on topic in both places), we would see duplicate questions featured on the front page, which would look a bit weird.

The whole "It's ok if you tailor your question to fit each site" idea, which is now quoted/referenced in all related meta discussions, originally came from Jeff Atwood himself (see his answer), and that solves the duplicate issue. Other than that, there's really no issue with duplicate questions, as long as they're good questions totally on topic for both sites.

Some questions can be perfectly on topic for two sites with identical wording, but the network was simply not designed to handle duplicate posts. Change the wording and tailor the title, even if it's already good for both sites - just make it different (This argument assumes that the question is truly good for both sites) and it's ok.

To anyone who says duplicate questions a bad in all cases, that's simply wrong! When questions are cross-posted with the right reasons in mind, in the right situations, there's nothing wrong with them, except the issue that I mentioned (the SE network's unified functionality).

So when you discourage users from cross-posting when the question fits well on two sites, explain this to them. It's not that the "tailoring to each site" is always necessary, it's just that duplicates don't work well in a network where questions from all sites are featured on the same page.

730
How do I get attention for one of my own questions without a good answer?
652
Are answers that just contain links elsewhere really "good answers"?
424
What is a 'rollback'?
880
The Many Memes of Meta
837
What are the badges I can earn on each site, and what are the exact criteria for earning each badge?
431
Which computer science / programming Stack Exchange sites do I post on?
451
A site (or scraper) is copying content from Stack Exchange. What should I do?
2528
Firing mods and forced relicensing: is Stack Exchange still interested in cooperating with the community?
2294
Stack Overflow is doing me ongoing harm; it's time to fix it!