Add a “ClearType On” option for the new flair

As Hans Passant comments there:

Hmm, not so sure. Text doesn't look nearly as good with just regular anti-aliasing. Should it look sucky for everybody or just those few that have non-standard hardware?

On standard monitors, it is really a significant difference without ClearType, see this screenshot with flairs on the blog, where Josh K's flair is still rendered the old way: 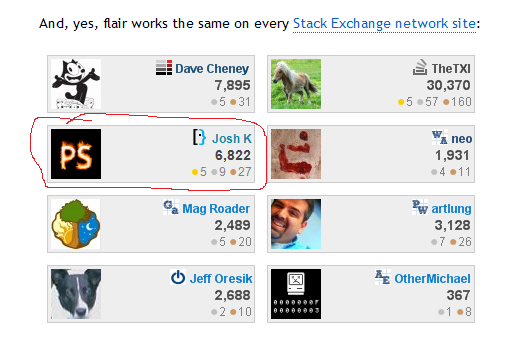 So I for one would like to have the option to display my flair with ClearType on, like it was before.

You could add an optional parameter to the image URL. If there are more users that don't want it, the default would be without ClearType (like it is now), and the option would be "ClearType on"; if not, vice versa.

ClearType and allied technologies require display hardware with fixed pixels and subpixels. More precisely, the positions of the pixels and subpixels on the screen must be exactly known to the computer to which it is connected. This is the case for flat-panel displays, on which the positions of the pixels are permanently fixed by the design of the screen itself.

Almost all flat panels have a perfectly rectangular array of square pixels, each of which contains three rectangular subpixels in the three primary colors, with the normal ordering being red, green, and blue, arranged in vertical bands. ClearType assumes this arrangement of pixels when rendering text.

ClearType does not work properly with flat-panel displays that are operated at resolutions other than their “native” resolutions, since only the native resolution corresponds exactly to the actual positions of pixels on the screen of the display.

If a display does not have the type of fixed pixels that ClearType expects, text rendered with ClearType enabled actually looks worse than type rendered without it. Some flat panels have unusual pixel arrangements, with the colors in a different order, or with the subpixels positioned differently (in three horizontal bands, or in other ways).

Please do not implement this.

I see the reasons for not implementing clear-type images (= it just doesn’t work) but I also have to say that I absolutely see the point: font rendering without clear-type just looks horrible, in particular when it’s used right next to a properly rendered text.

So: I would never consider using the non-clear-typed images, making them at least as useless as the clear-typed variant.

Of course, there’s a ridiculously easy solution to this conundrum. Get rid of the image flairs and revert to JSON/JavaScript includes. They are easy to use, more accessible (text in images? really?), just look better (but then, one of the flair styles is “hot dog stand” so this point is moot) and are customizable. In summary: using images is the worst of all possible solutions.

I’m not taking the user’s perspective here, either: Flairs are essentially free advertisement for Stack Overflow and I was serious when I said that I won’t display an image-based flair on my website (in fact, I use it in continuous text at the moment). Less adoption essentially means less ads for Stack Overflow. So I think the easiest way to expand adoption is to give users the choice, not dictate one format.

I guess the Stack Overflow API can be adapted easily enough to my particular use-case but wasn’t the point of the flair to make this simpler?

Not the answer you're looking for? Browse other questions tagged feature-request flair .

536
How about a “Vote not to close” option to counter the “Vote to close”?
263
Add the ability to ignore users
390
Add a way for moderators to cast a normal, non binding close/open vote
16
Disable ClearType (subpixel rendering) for image-based flair
43
Choosing profiles for combined flair
31
Automatically resize high-resolution screenshots
402
Add an “I don't understand” option for review audits
298
Add optional box for spam flags letting you say why you think it's spam