An Area51 proposal is languishing in committal, and my efforts to convince other communities (where, admittedly, my voice carries no clout, because dealing with typical messageboard layouts is driving me batty - I've been spoiled here) are being met with a resounding yawn.

Saying that the site will be tremendously useful, and trying to compare it to Stackoverflow doesn't really mean much to a bunch of graphic artists. I could try listing some of the other Area51 sites that have entered beta, but then I REALLY sound like some kind of nutjob spammer.

I think there's a desperate need for this site (huge area of conceptual overlap between 3D systems, in addition to a scattered array of barely-searchable forums, with lots o drama) - but I'm at a loss in terms of trying to get people to understand what the site will offer them. Or even to evoke some interest.

Maybe there's a place with the collected techniques of the successful Area51 sites' publicists? I feel that it will be a lot easier to draw people in once there's an actual site, but I'm not sure people quite "get it" enough to commit, if they're not already users of another SE site. Even if they DO follow my link, I'm not sure they know what it means.

Hope that made some kind of sense.

I don't agree with others that it's only a matter of time - I think there are several hurdles here, that are needlessly inhibiting otherwise successful proposals from getting off the ground.

This has turned into a pretty long post - I'll attempt to summarise it properly later, but for now I'll go with this...

The hurdles for new Area51 users are basically: not enough relevant information, too much unnecessary stuff.

Scroll down for some pictures of possible solutions.

The first problem is explaining the benefits of StackExchange to someone that hasn't encountered it before - and indeed probably settled on the first place that Yahoo/Altavista/Lycos provided them, and simply put up with all the quirks because they don't know they can have better.

How do you explain the platform when you can't offer them any meaningful comparisons?

There are no active artist-based sites, and only Photo.SE in beta (still!?) which comes close.

Not all topics will necessarily have a related idea, and even then I don't think relying on this is the best way to convince someone that a StackExchange site is better - it needs more than that (will make a suggestion later).

The next hurdle is Area 51 itself - you've convinced someone and they've followed your link, but they arrive at a screen full of confusion.

It might not be obvious to practised Area 51 users, or even just people experienced with browsing lots of websites and webapps, but I imagine the first thought of someone following a link is "WTF is this!?", and "why is this different to <example site>?"

There's not really a clear explanation of what a proposal is, in a general sense, which there really should be for an off-site referral link. And the text in the orange box isn't helpful enough: "If you like the idea, you can click the "Commit" button below to be notified when the site is created" - there's no indication of what Committing is, or that there that the site will only be created if 200+ people commit.

Some people are scared of commitment, and may simply want to wait for the percentage counter to get 100%, but I don't think it's necessarily obvious that the counter depends on commitments.

The final hurdle is the Commitment box itself.

Again it's a confusing muddle: What's that red beep thing - looks like feedback - did I do something wrong? Why is there a huge highlighted 3?

Then it's asking people to almost sign a contract - people don't like being locked into things, but you're asking for a guarantee of participating actively for three months, and requiring a minimum of ten questions.

It might be intended to weed out less serious people, but it's as likely (or more so) to scare away people worried about being punished if they don't comply.

The first problem could be helped by generating a sample/tutorial site once a proposal reaches commitment stage, not functional, but populated with the proposed questions and random (lorum ipsum?) answers, and nice verbose tooltips explaining every aspect of the interface, and how it differs from traditional Q&A/forum systems.

This should be accompanied with a functional Meta site, where the proposer and any SE user with >X rep can discuss how to find committed people, and start on some of the early private beta meta discussions.

The second problem ideally needs a simplified referral screen - hide the users by default, give an explanation of what the example questions are (i.e. on-topic=good questions, off-topic=not what the site is about), and most importantly give a clear explanation: what is area 51, what is a proposal, why commit to it? (And of course a link to the example site described above, with a clear indication that it won't get created for real without commitments.) 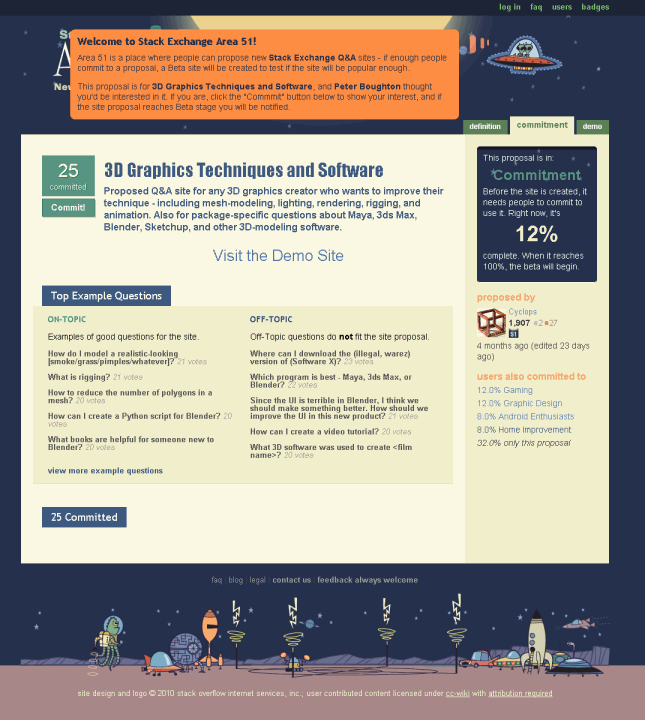 The final problem has an obvious solution too. Tidy the box up a bit, (simply by not putting non-significant red text in the top left, and removing the formatting on the proposal count).

Then, reword/simplify the opening paragraph, and update the form to ask:

Or whatever questions make sense - the idea being to make the commitment a positive thing, rather than a burden.

The answers can then be used to make a more informed decision (i.e. An expert who visits daily and will contribute lots of content should carry more weight than an occasional newbie) and the commitment percentage can be adapted to make use of this extra information.

Here's a mock-up for this idea: 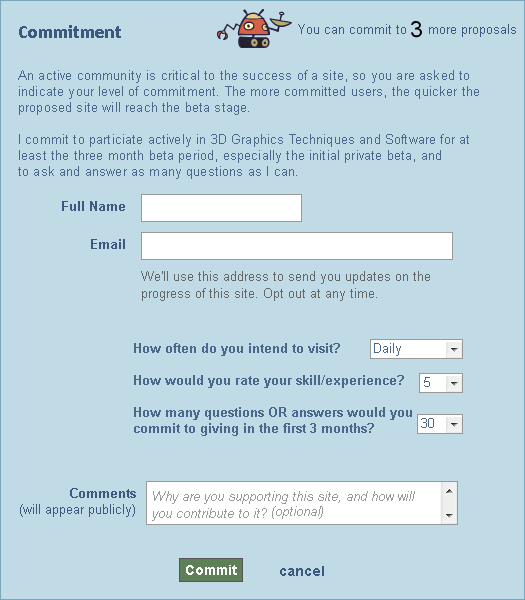 It's not perfect, but it hopefully conveys the idea?

I don't think it's important as suggested that people are deeply familiar with Stack Overflow - sure it needs some people that are, especially with regards to moderation, but most people (and especially so those that will commit to a Q&A site) are quick learners, and will have no problem picking up the ropes during the beta period, (under the guidance of the experienced SO/A51 users).

There doesn't need to be an overlap with Stack Overflow for a site to be succesful - again, as above, people can adapt pretty quickly, and tend to only need small amounts of guidance.

Specifically on the example proposal, 3D Graphic Artists are just as competent at learning websites as Photographers - it just so happens that photography is more common amongst SO/A51 users, and a popular activity in general, these days.

However, even if experienced StackExchange people are required, that is simply a matter of tweaking the existing commitment percent formula appropriately - but it doesn't mean it shouldn't be made easier for users to arrive from outside.

You're seeing the programmer-centric origins of the Stack Exchange communities. In one sense, that is by design. In those early months, we wanted folks familiar with the platform — i.e. those that "get it" — to help us launch the first generation of sites. We needed users who would understand how the platform works and understand how to use it properly.

But the support for proposals will start branching outwards into ever-more diverse topics. Area 51 might not currently be up to the task of creating the next great site about "graphic design" or "high fashion"… but two or three degrees of separation and you'll be surprised how quickly it happens.

Don't get frustrated and don't give up. The community of Stack Exchange sites, as it grows, is growing in your direction.

I would read this at face value ... there isn't a big enough overlap between graphic artists and the people who understand Stack Overflow and its merits. Even if you did the world's best job at publicizing and marketing this proposal to non-Stack Overflow users, they would get into the site and they either wouldn't use it, or they wouldn't use it correctly.

I believe that this is probably a temporary condition... as Stack Exchange grows in the general population, it will eventually encompass larger and larger groups of people, and eventually there WILL be enough graphic artists who get it and want a site. It may take a couple of years, but I believe it will happen.

Think of Facebook -- for the first few years it was ONLY for college students. It didn't open to the world at large until there were so many people who knew about it from college (or from their college-aged friends) that it stood a chance of working in the population at large.

Historically the most successful way to publicize a StackExchange site has been to get a pair of popular bloggers in your niche and let them talk on a podcast about this new site that will be launched in 6 to 8 weeks.

I don't mean that ironically. StackOverflow would have had a much harder time getting started with critical mass if Joel and Jeff weren't IT blogosphere micro-celebrities.

Identify core bloggers and other popular people in your niche. Pitch to them and try to use their blogs (and other channels) to spread the message across your community.

5
Should rep from other (non-trilogy) SE 1.0 sites count for commitment phase?
3
Do Area51 rep requirements track changes on trilogy sites?
3
What processes made Stack Overflow the website it is today?
43
Concerns about my downvoting with comment on established users' posts as a moderator
77
Is using reputation to scale the number of close votes the best way?
266
Let's hold language in comments to the same standard as posts
116
Please Join Us in Welcoming Our New Meta Stack Exchange Moderators!
219
I am non-binary - recent events have made SE less safe for me (and other members of the LGBTQ community)
20
How should a new site with a good userbase *outside* the Stack Exchange mainstream get itself bootstrapped?