user434507 asked What does it mean for the file name to be shown with red background on Stack Overflow, which was closed and migrated to Super User.

This user doesn't have an account on Super User, so as expected, the username is gray, static text. Comments that this user made on an answer, though, show as "Anonymous", rather than "user434507" as would be expected. Further down in the comments to that answer, another user replied to @user (now Anonymous), which at first glance, makes it look as though there might be a missing comment.

Shouldn't comments retain the user's name when being migrated, like the question does?

Also related, if the user were to come over and create an account, would the comment be reowned by the user? This question makes it appear that it won't (it was tagged by-design, but in the picture, it looks like the user had already associated accounts but not regained ownership of the comment).

Since comments don't impact reputation or do any other things a post does, they're not as important in the migration process.

We won't (at this point anyway) be going so far as to hook up comments to their owner when they register for the site the question was migrated to if they didn't exist at the time of migration.

However, the situation can be better short of the association step above (which is very involved).

Starting with the next build, the owner's name (of any comment owner, not just the OP) will carry over to the destination site, even if that user doesn't exist there. An anonymous comment (from deleted users) on the source site will of course stay anonymous on the destination, but the rest should have users, and if not users at least the correct name.

Even more: the user from the example above meanwhile is a registered user on Super User, but still their pre-migration comments are labelled Anonymous: 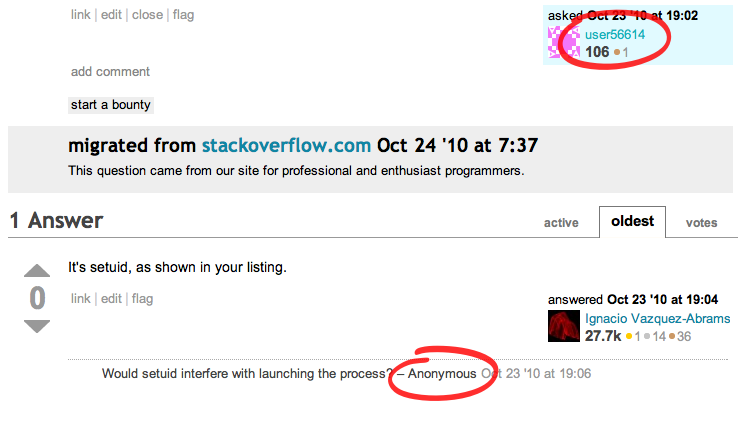 (I'd guess this might not only apply to the OP, but also to comments left by other users who have no account at the time of migration?)

Not the answer you're looking for? Browse other questions tagged bug status-completed comments migration ownership .

322
Inline links in comments
3
After disassociating accounts, I am still the owner of my migrated answers
3
Author's Comments in a Migrated Question's Answers Are Not Clickable
401
Add data.SE style “magic links” to comments
312
Don't remove the @ part of my comment
24
Comment authors are not getting migrated
82
Further anonymize deleted accounts by changing the username in close/delete notices
6
Can't migrate migrated comments
273
Make moderator messages anonymous
179
A proposed philosophy of question migration