Thanks a lot for this post ... and other first time user curiosities

discussion new-users thanks
Share
Improve this question
edited May 23 '17 at 12:35 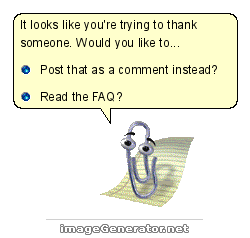 -11
Blessings and other appeals to deities
91
Heuristics for detecting a bad answer?
41
How does Stack Exchange attempt to prevent low-quality questions and answers?
20
"Belongs on" comments
13
Can (and should) more be done to encourage users to search first and ask only if they don't find an existing answer?
22
Use upvote button for "Thank You" if you don't have enough rep
2
Should we automatically protect questions that are at least a certain age?
7
Lower commenting threshold to 1 rep
2
Comments, Upvote and reputation constraints
-12
New Users Adding Answers to Answered Questions
See more linked questions

914
Why aren't people voting for questions?
594
Exit strategies for "chameleon questions"
245
Can we prevent some of the low-quality questions from entering our system?
362
Stack Overflow technology makes me write bad answers
179
Usability issues for first-time Stack Exchange users - a micro-study
451
Employee profiles are now marked with a “Staff” indicator
2482
Firing mods and forced relicensing: is Stack Exchange still interested in cooperating with the community?
550
The company’s commitment to rebuilding the relationship with you, our community
238
Review queue workflows - Final release