I'd like to see my started-but-never-finished responses, possibly between x Answers and y Votes in /<<user>>/Stats/?

There is only a single draft per site, which will show in the answer text input below each question you look at?

An easy way to do this is to replace delete with hide and put a (draft) flag beside each question when you're writing, just like the "community wiki" box.

A draft is synonymous with hidden, and hidden means what delete used to mean, only with one change:

In the question and answer lists below D means draft. You can choose to list your drafts. When you edit a draft you can choose to remove Draft status so it appears on the site. 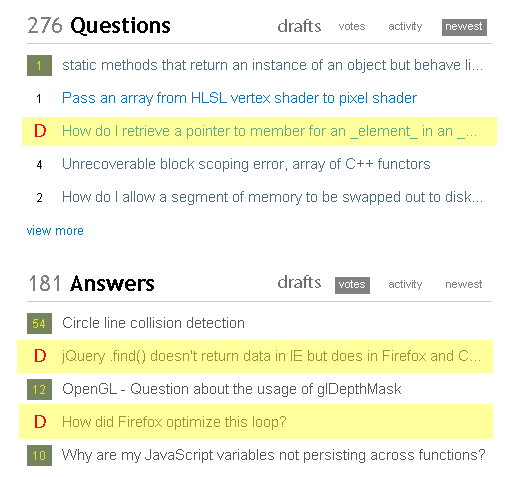 "Deletion" would have its old meaning (no one can see it except >10k).

Ideally, this would be added as a new tab to our network profile: (private of course, others viewing our profile won't see it.)

(this will make is consistent with other cross-network stats, like favorites.)

I like to slowly write a question while I am exploring a problem. This tends to produce decent questions, and it can personally be very helpful as Stack Overflow makes an excellent duck. However, sometimes I may not have time to entirely work through a problem in a single session and would like to come back to it later.

Similarly, Stack Overflow is supposed to serve much the same purpose as a personal programming blog. The blog post Encyclopedia Stack Exchange, introducing the improved self-answering feature, even suggests that existing bloggers may want to use Stack Exchange instead:

[...] but we have a bold goal for this new feature: we’re trying to move even more of the world’s long-tail, detailed knowledge into Stack Exchange. It works for all 83 sites (and their metas), you get to keep the reputation you earn, and you’ll get a lot more eyeballs than you can get on your blog (no offense… even my blog doesn’t get 24,300,000 monthly uniques).

Yet bloggers often do not write entire posts in a single session; they may have many drafts in progress at a given time. This is a very natural and common way to approach this sort of writing.

Treating Stack Exchange questions with the same care as you would treat a post on your own blog is very desirable behavior, but the software currently does little to encourage or facilitate this. Even the limited functionality provided by the current drafts feature is less likely to be used because the automatic almost-invisible behavior makes drafts feel very ephemeral. Even though I know they're saved on the server, I don't feel safe trusting it to save my unfinished posts.

I can and sometimes do use an external editor to work on my posts, but this is an inferior experience. Most bloggers use their software's draft feature for a reason. I don't believe there are any editor that implement exactly the same flavor of Markdown as Stack Exchange, nor would there be any which provide the same style and layout so that you know precisely what your post is going to look like when it's actually published.

This doesn't need to clutter the interface or experience very much. An explicit "save draft" button next to a drop-down list of saved drafts would not take up very much space in the Ask Question interface. It should not be very confusing to users; drafts are a concept that they will already be familiar with.

A more fleshed-out drafts feature would help encourage more thoughtful, developed posts, and would reinforce the blog-alternative-ness of Stack Exchange. It may encourage users in this direction even more than the immediate self-answer feature did. These benefits seem clear. I don't understand what downsides would make this feature undesirable.

I originally commented to one of the answers above, then started commenting on the question itself but have now decided to write my own answer because I WOULD LOVE to see this incorporated into the SE sites! And personally feel that it should be.

But in the absence of such functionality, I have come up with a workaround that isn't perfect, but it's the closest thing I've come to having an elegant solution to an age old problem.

I use SimpleNote and within it exists a feature called "Markdown Formatted" which enables you to format your note in the same format as used by SE. It's not perfect, but does for the most basic of needs. 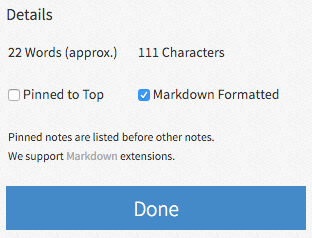 For example, with the Markdown Format enabled you get an
edit | preview selection which turns this: 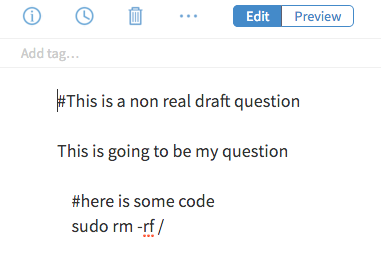 As I mentioned, it's not perfect, but at least you can save your work somewhere and bring it into SE later to ask it once it's finished.

I for one, would personally LOVE to see this feature (the ability to have multiple draft questions and possibly answers and an area with which to manage them) and feel that it is needed. That's just my personal opinion, It may not be yours, and I respect yours and trust any commenters will offer me the same courtesy. But in the meantime, there is this solution, I hope it works for you.

Not the answer you're looking for? Browse other questions tagged feature-request draft .

-2
Better drafts feature for questions
-5
A process for multiple drafts?
3
Find own non-posted questions?
0
Where can I see the list of my saved drafts?
261
Allow questions to be saved as drafts prior to posting
29
Add a clear button when a saved draft is loaded
24
Add an option to save drafts manually
8
Should "Delete" be replaced with "Hide"?
33
Expand draft feature to allow multiple drafts
5
Draft a question
See more linked questions