Today, upvoting is anonymous; the recipient knows they were upvoted, but they don't know who upvoted them, so it's not a public personal gesture. The only way to let someone know who likes your answer is to comment, often by saying "Thanks!" which adds nothing to the discussion.

There should be some non-anonymous thing I can do to communicate that I (personally) appreciate your response.

For example, Quora has an explicit “Thanks” button. Here's an example: http://www.quora.com/How-does-Twitter-make-money As you can see, it has both upvoting and a "Thanks" button. It works great; check it out.

I think we’ll see a lot more people posting great answers when they get positive feedback from a personal “Thank You.” It feels really good to receive personal thanks, especially from an expert who you respect.

Apropos https://blog.stackoverflow.com/2011/01/how-to-say-thanks-in-an-answer/ and Thanking users who answered my question

Jeff says that the way to thank users is to upvote and "pay it forward" by answering other questions. I think that this argument goes against human nature, because the recipient doesn't know who did it (or even what they did). The point of saying "thank you" is to make a personal (ideally public) gesture of gratitude, which feels good to the recipient.

feature-request status-declined thanks
Share
Improve this question
edited Jan 18, 2021 at 12:04

I agree that this isn't a duplicate because of the focus on "show non-anonymous thanks", but I don't think the proposal has merit.

Seeing a random assortment of 10-20 users who clicked a prefabricated, mindless I liked this button does not make the internet better.

Or, if you prefer, in image form: 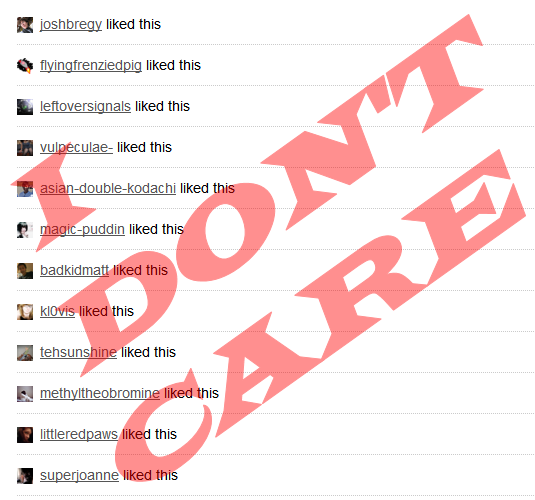 If you really want to thank someone, either

I want to comment on one specific aspect of this:

The point of saying "thank you" is to make a personal (ideally public) gesture of gratitude, which feels good to the recipient.

There are a handful of people in the tags where I'm active who I respect greatly, because their answers are informative, well-researched and well-written. The experts.

They've taught me a great deal, by correcting, disputing, or clarifying my answers, or more often just by posting better answers (which I read, am humbled, and delete my own inferior answer). But I can't recall a single instance where I've been thanked by one of them. I count as high praise the very rare instances where we both answer and the expert deletes his answer.

You've designed a feature for streamlining ego-stroking praise, but those most likely to use it would be those whose praise means - by your own admission - the least.

Well, I agree with the 'Wood that this information is noisy and irrelevant to most users of the site.

Its not completely useless information to a poster.

Its all about the unobtrusive UI's. When I click upvote, a white box appears. Eventually it becomes like the answering machine - "You know what to do." 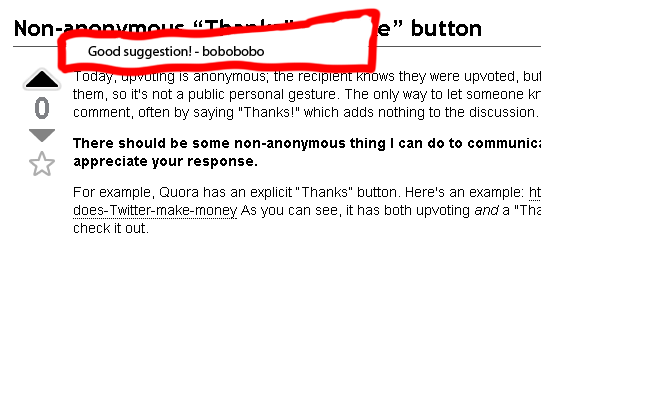 On voting, you can either fill it in, or just leave it (which is equivalent to hanging up without leaving a message).

Anonymous voting is a site wide setting that can be switched on/off on the profile page.

The useful info to the poster is displayed on flyover of the up/downvote widgets. 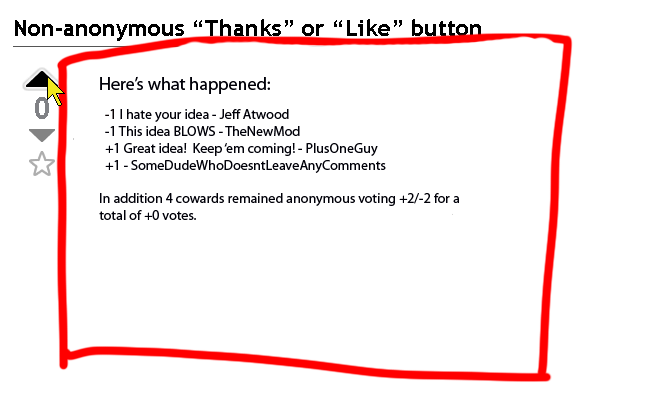 Not the answer you're looking for? Browse other questions tagged feature-request status-declined thanks .

87
Should there be anonymous answers (and questions)?
399
Add a way for moderators to cast a normal, non binding close/open vote
53
Nicely discouraging serial upvoting
75
Remove the 25% requirement from the "Unsung Hero" gold badge
148
Explicit "do not award bounty" button
274
Make moderator messages anonymous
423
Goodbye and thank you, Jaydles!
51
Farewell, Brian!