Can (and should) more be done to encourage users to search first and ask only if they don't find an existing answer?

Or, to put it another way: is it a problem that people keep asking question that have multiple, obvious duplicates?

I do not intend to address the problem of hard to search for questions, nor of finely distinguished, subtly different problems; just simple questions with a few typical phrasings and fairly clear answers.

Taking an example from SO today:

At this point, Stack Overflow has been operating for more than 11 months and has been open to the public for most of that time. There are more than 200,000 questions and 1.1 million entities in the database.

A moment's thought might have suggested that the question could already have been asked, and searching for c++ compiler for windows (link) returns half-usable questions on the first page including C,C++ compiler for Vista. Presumable these came up when the OP went to ask, too.

I find this kind of thing a little annoying. It is noise, and in small amounts easily ignored. But there seems to be a lot of it.

The system already tries to preempt the worst of this by offering duplicates when composing a question, but (as noted in Should you gain rep for asking a duplicate question?) the incentive from the rep system is to post anyway.

Note also that, by design, the existence of an answer on Wikipedia or some other site that Google knows of, shouldn't necessarily prevent a question-and-answer here.

So, does this "problem" need addressing? Is it a strength of the system? Irrelevant? If it is a problem, what can actually be done? Remove the rep incentive by canceling gains for posts closed as duplicates? Something else?

I am personally reluctant to go with adjustments to the rep system as the first remedy — that shouldn't be the first tool we reach for, even if it is the most powerful.

Hey! I found an existing instance (or close to it) for this question. ::sigh::

Edit: Diddled the title because TheTXI answered the question as written, and showed me that I wrote it wrong. Thanks.

This has come up before, in fact this question may be a duplicate!

I don't want to suggest people search for more than two minutes before posting. Five sounded reasonable to me, but then I'm an old guy - these young people, brought up with the Internet, have no patience, so we shouldn't expect it of them.

What we need is for the search box to get fixed so that it's practical for them to search. We also need more interaction in the title box when entering a new question. Right now, you have to control-click on one of the links to get it to pop up in a separate tab, go read it, then come back. I'd like to have at least a preview right there.

Finally, I think we need to get the most frequent duplicates into a language and subject-area FAQ. In fact, we should be looking not only for the most obvious duplicates, but also for the underlying question. The answers to these should become FAQs.

Then, both the Search box and the Question box will find the FAQs first.

We have considered adding an interstitial page, for < 100 rep users, that they will see after clicking the "Ask Your Question" button on the /ask page.

This post-ask interstitial page would contain a more comprehensive search for duplicate questions based on the title, body, and tags. The new user would have to scroll down and click "yes, I still want to ask this question".

(I do wonder if users might perversely want to click through regardless of duplicate status, as at that point, they've invested all the effort in writing their question and tagging it..)

Right now the ask page only searches on title, which some people seem to think is the greatest and most miraculous thing since sliced bread.. but I find it lacking.

edit: this is now deployed, and enabled on Stack Overflow only. All new users (rep <= 10) get this mandatory advice page ...

... when they attempt to ask a question via questions/ask. At the top of it:

Have you thoroughly searched for an answer before asking your question? Sharing your research helps everyone. Tell us what you found and why it didn't meet your needs. This demonstrates that you've taken the time to try to help yourself, it saves us from reiterating obvious answers, and most of all it helps you get a more specific and relevant answer!

I got hammered for asking a duplicate question: an introduction to the less pleasant side of SO.

But it never even occurred to me to perform a search first. I wonder if it's a design issue? Looking at the site now (through Chrome) the search box is virtually invisible. You have all of these nice, big, attention-grabbing buttons and tucked away in the corner is a little box of which two of the borders aren't even visible.

How about grouping Search and Ask Question together, separated from the rest by clear space, giving the Search word the same style and prominence as Ask Question, in such a way that you're led to do Search first, then Ask a Question?

A different thought-experiment: merge 'ask a question' and 'search' into ONE page with a single textbar. Invite visitors to "ask a question or search for a topic" there, and run the string they enter through a site-wide search.

If search matches are sufficiently good (by your favorite heuristic):

I've had several instances where I did look through the suggested questions when asking and did not find a duplicate. Now I do a Google search using site:stackoverflow.com, if I remember, before asking a question. I've had better luck finding existing questions this way.

I went to SO and typed in your example question "C++ Compiler for Windows" and got this response:

That's not a very good title. Can you add some more unique words to it?

Using Google, it was the first (non-sponsored) result and there were 9 more pages of potential matches.

Based on this, my suggestion would be to improve search. If you can't do better than Google, then use Google instead.

The search engine seems powerful. With tagging, you can probably find what you're looking for faster than using Google if you use tags correctly. 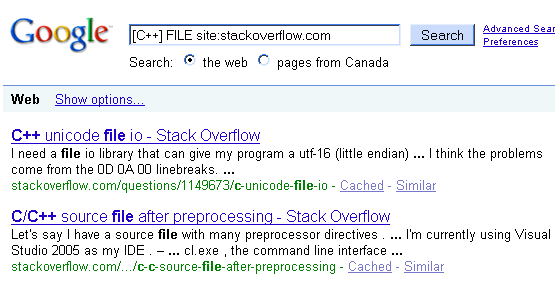 so search is a lot more vibrant and colorful.

The search results page may something of an issue. It feels a little tight, and usually makes for a lot of scrolling.

It contains information that isn't necessarily relevant to your search: namely people's avatars and voting results.

It looks great, but it might be a bit harder to use because it looks too good and might be slightly more jarring to browse through than a google search results page.

The "suggester" after you enter the subject seems a bit lacking.

For example, this question, does not come up at all as a suggestion if you type in "How do you open a file in C++?" as your question. This is odd since that is the title of that question. (It also tells you it's a subjective question and will be closed, but that's a different issue.)

Why not split the ask question for "low" rep users into two pages?

The first page is the where they enter the title. This then does the "related questions" search and presents them with a list of possible existing questions.

There would then be a "my question is different to all these and I want to proceed" button which takes them to the page where they can enter the body of their question.

Not sure how to ensure that they've actually read at least one of the suggested questions though.

I don't know how much more you can do to have people search for an answer first. I mean we already do a search as they type in the title of their question to see what matches pop up. Outside of forcing them to go through another search process before they even get to the Ask Question page, there isn't much you could do. And even if you did that, I don't see why you would be likely to find results any bit better there than elsewhere.

Are separate "Ask a Question" and "Search" widgets necessary? Chrome shows us that separate search and location bars are unnecessary (the old-school-ness of Firefox now annoys me...), so cannot SE use the same?

In any case, I hate their location. I seldom use maximized windows, so "Search" is barely visible, and "Ask Question" is off the screen. Search, which I think should be a core, integral primary feature, is marginalized as something that comes after the "About" and "FAQ" sections! I'd like to see them (preferably combined) Prominently Displayed directly underneath the community logo. (Excuse the quick mockup)

Besides, with regards to the question suggestions when posting a question, it's amazing what people will do to ignore something that they don't expect and don't perceive to need. (Even when we devs spent countless hours brainstorming, designing and implementing an elegant and helpful suggestion... Grrrrr...) "Why is this coming up? I'm just trying to type my question! [ignore + scroll]..."

Not the answer you're looking for? Browse other questions tagged discussion status-completed search asking-questions .

791
Recent feature changes to Stack Exchange
191
Please charge rep for questions after threshold
44
What's the single biggest barrier to entry on Stack Overflow?
54
Noob questions, simple answers and big rep points
53
Thanks a lot for this post ... and other first time user curiosities
52
Should you gain rep for asking a duplicate question?
85
Add a hint to stay put after posting a question
28
Should we encourage more closing?
12
Reputation for Closed Questions
6
How long should I search for an answer before I ask on an SE site?
See more linked questions

191
Please charge rep for questions after threshold
914
Why aren't people voting for questions?
1833
Could we please be a bit nicer to new users?
594
Exit strategies for "chameleon questions"
385
Send authors an inbox message if their question is closed
224
Link up the excellent search engine that gives "Questions that may already have an answer" with the search box
435
Should Stack Exchange in general be awarding "A"s for Effort?
537
How to avoid "Hot Network Questions" on the sidebar
333
Gold tag-badge holders and moderators can now edit duplicate links
2482
Firing mods and forced relicensing: is Stack Exchange still interested in cooperating with the community?