Ask Question
Asked 9 years ago
Active 6 years, 9 months ago
Viewed 2k times
-8
As it currently stands, this question is not a good fit for our Q&A format. We expect answers to be supported by facts, references, or expertise, but this question will likely solicit debate, arguments, polling, or extended discussion. If you feel that this question can be improved and possibly reopened, visit the help center for guidance.
Closed 6 years ago.

My 2 month old question (which has since been deleted) was edited by a user with editing rights in a very abusive fashion:

I don't know what else to say, I find this rude and abusive. This is not rephrasing or fixing a typo, the user has altered the meaning of my question and imposed his answer. That question is displayed under my account - my real name - and I strongly disagree with anyone putting his words into my mouth.

Moreover I can't see any added value in the edit - it is now asking a different question. It is said SO is run by the community but if it means that individuals can publish under your name whatever fits their purpose I am considering leaving StackOverflow.

discussion edits abuse
share|improve this question
edited May 23 '17 at 12:35

I can understand you were surprised to see the edits to your question, but as an outsider I would say that they are not really that substantial. But if you really want to use your phrasing feel free to roll it back.

You will always retain the power to choose one of the answers as the one that helped you the most by accepting it. It will appear at the top of the list, even above other answers that got more votes by other users in the community.

Separate from that, it happens more that people upvote an answer they like but that is not the most useful for you personally. It may be that it is more generic and thus applies to more people, but again, this should not stop you from accepting the answer that helped you most. I would not have written the lines "warning" people not to upvote that answer: maybe you started an unintended Streisand effect?

Also separate from that, everyone has the possibility to put a bounty on a question and reward a user for an answer they think deserves it. This may or may not be the answer you liked the most, or that got the most upvotes.

This combines to make the most out of your original question: you get an answer you like, you reward the user who gave it, the answer can get more general so it appeals to more people, a visitor can see what answer "the community" liked the most, and individual rewards can be given.

Please don't leave the Stack Overflow community because of this. It might get some used to, but it should not be a reason to leave.

The reason I even edited your question in the first place was because of the inflammatory sentence:

Please do not vote for bobince's answer, no matter how right he is it is not a helpful answer to my question.

Were that not in there, I would never have touched your question.

Since I was in there already, I took the time to edit it for clarity and to try to take the view of someone who would Google that question. I flipped a mental coin, and started out by clarifying the subject line.

But that wasn't the full story, was it? Were you looking for workflow and tools? or were you really asking,

'Hey, I'm coming from a Flash Background, I'd like to learn HTML5, what are some good resources for me to get started?'

So that explains the title.

Now, let's get into the meat and potatoes of my edit:

As for putting a bounty on the question and giving it to Bobince, I did that because there is value in his answer, and I thought it unfair for you to summarily dismiss his answer.

Bottom line: None of your inner questions were changed; all that happened was that the fluff was removed and the title was changed to focus on the crux of what you were actually asking.

I consider it rude to call out answerers negatively in your question, and that's what I thought you had done with that edit about bobince (I'm not the only one, editors generally edit that stuff out anyway).

As always, if you believe someone is abusively editing your posts (or showing malice in their edits), please contact a moderator (by flagging the post) or post here on Meta (If it's really abusive then contacting the moderator is the way to go -- if you just don't like the edit then posting here is a good idea).

+1 for speaking out. It will help the community and perhaps help you too.

The question in question:

Your final version of the question:

Final version after being collaboratively edited 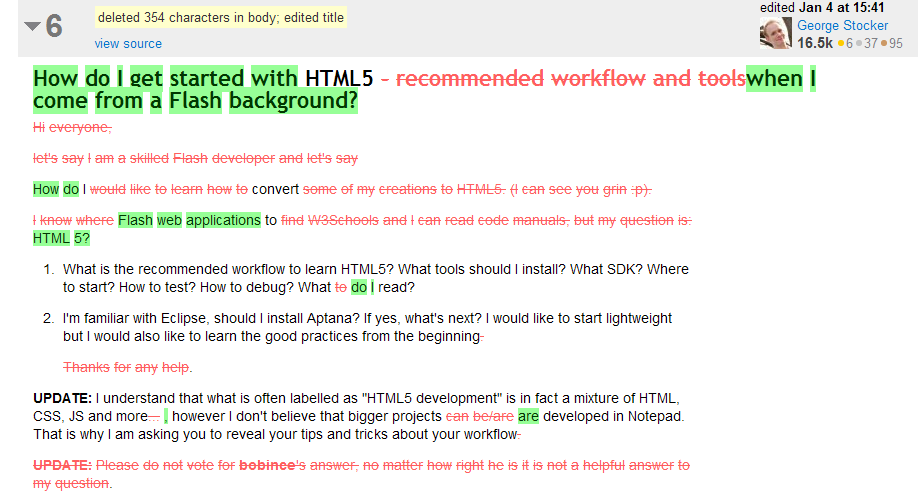 As other answerers have already stated, the question seems to have been edited for clarity.

Did the user do right by removing the line where you ask people to not vote for bobince? Maybe, Yes.

When you ask a question, people post answers and if the answer is agreeable to other users they upvote it else they add their your own answers. **If you do not like an answer down vote it (or add a comment or just look away). **If you find a post abusive, flag it. While you may have the right to ask other users to not do a certain thing, expect them to exercise their right to do as they please. Bobince's question was not abusive and was in good faith. Your appeal to users to not vote for that question may have been in good faith too, but may not have looked to other users as such. Yet, George Stocker offered a bounty and waited for 2 days before offering the bounty to bobince (thus indicating that the bounty award was not to spite you for your appeal).

On your question, only you can mark a post as the answer. No one else can. Hence the selected answer on your question is what you selected as an answer and not what George Stocker awarded his bounty to.

Bounties are offered to attract more answers to a question. You can award a bounty on your own question and select a post to which you wish to award the bounty before the bounty expires.

Stack Overflow users can award bounties on questions asked by others. This is done if the user wishes for more answers to the question. IMHO it is a good and generous thing to do, because when a user awards bounty on his own question, due to greater views the user may reasonably expect some upvotes and thus some reputation in return for awarding the bounty (in addition to the expectation of a better answer). A third-party bounty giver does not have this temptation, he is in it purely for a better answer.

You can still re-edit the question and some other (sufficiently privileged) user can edit it again. No matter what happens the question will reflect that it has been edited and will offer a link to all the edits done.

The content you post belongs to the community in a good way. Stack Overflow uses a CC-by-SA license which makes your content available to others as their own, while still safeguarding your moral rights.

Finally earning reputation is not the goal of Stack Overflow, making available better answers to the community and making the Internet a better place is what Stack Overflow strivers for.

You have been for 2 months on Stack Overflow (with your current user account) which is a sufficient time to get a feel of how the community works, but it is never too late to learn.

As far as your allegation of removing sources is concerned, I couldn't find one, but it may have missed my attention.

That edit seems right to me: it made the question more general, and as a bonus the bounty gave it some more attention and might have gotten all of us (including you) new answers that could have changed your insight. It even might have gotten you some upvotes!

According to The Wikipedia of Long Tail Programming Questions:

It is OK to edit a question to make it more general. With the power of editing comes the power to take someone’s selfish, very specific question, and edit it a little bit until they’re asking the more general question that hundreds of people encounter.

Please do not vote for bobince's answer, no matter how right he is it is not a helpful answer to my question.

Again: Stack Overflow is not a help forum. Even more: you added your "I understand that what is often labelled as "HTML5 development" is in fact a [...]" only after bobince answered, kind of invalidating that answer by changing your question.

This seems like a complaint, not a question, but anyway:

It seems to me like Stack Overflow is working correctly here -- you got a useful answer to your question, and there's also a separate answer a bunch of other people consider useful.

While the question itself is no longer in your own words, that's the nature of community editing (and I see that you've agreed you can live with that now that you understand the expectation).

To me, reading this all after the fact, the edits don't seem abusive.

On the "don't vote for answer X" question, which really got this controversy started, I can see how after asking a question and getting certain answers which aren't exactly what you wanted, you might want to steer people in another direction, but I'd encourage you to do this in a more constructive tone than "don't vote for the answer by [name]", especially when the answer is useful to a lot of other people and just not to you. People get their own votes to do with as they wish; that's what "vote" means!

I make the following points without having read the question and the edited contents and am agreeing with any side of the issue:

Not the answer you're looking for? Browse other questions tagged discussion edits abuse .

243
Add the ability to ignore users
203
What is the etiquette for modifying posts?
350
Which computer science / programming Stack Exchange sites do I post on?
171
We should be able to close questions as duplicates of any question
354
New three-tiered badge idea: Explainer →Refiner → Illuminator
293
We're working on a new stat to help convey the reach of your posts here
291
How do we encourage edits to obsolete/out of date answers?
819
Net Neutrality and Stack Overflow / Stack Exchange
2187
Firing mods and forced relicensing: is Stack Exchange still interested in cooperating with the community?