The new flagging dialog gets in the way

The old flagging dialog box politely "stepped aside" or wasn't so big that it prevented a quick re-scan of a post and possibly a copy/paste of things in the post you wanted to highlight to the mods.

The improved flagging dialog hides the post being flagged. Now, with all these new flagging options, it's sometimes necessary to have a quick re-read to make sure you're picking the flag reason that matches best. If you've started typing in the "other" box, then you have to select/copy, close the dialog, re-read, re-open, etc, etc.

It kinda gets in the way.

It would be nice if the box

This is also a problem with similar dialogs such as the closure dialog. It's particularly problematic with the Close as Duplicate Dialog as it's quite possible you'll want to review the question or click links to suggested duplicates in the comments, which might be blocked by the big overlay.

Browsers have gotten sufficiently not garbage in the (checks) two years since this request came in that we revisited it as part of the other dialog changes.

Starting with the next build the flagging and closing popups will be dragable (the "title" at the top is the handle in both cases).

A possible alternative that I used for my AutoComment script is to add a 'seethrough' link. When you hover over it, you can 'see through' the popup. 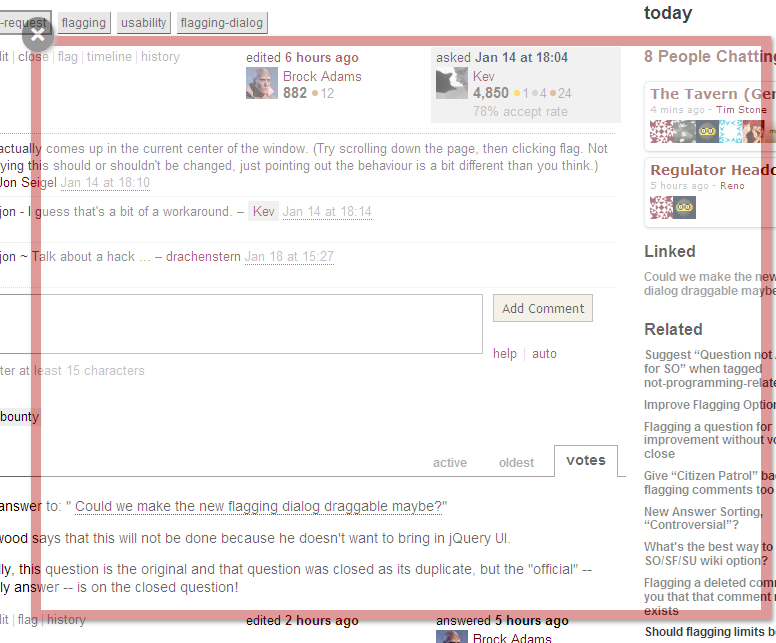 This requires pulling in a large jQuery UI dependency, and given that I think jQuery UI is pretty crappy and bloated.. unlikely.

Not the answer you're looking for? Browse other questions tagged feature-request status-completed flag-dialog close-dialog .

550
How about a "Vote not to close" option to counter the "Vote to close"?
653
Any way to send a personal message to another user?
852
Can we have the ability to retract a close vote before it closes?
203
Avoid the Streisand Effect - be clear about the reason when suspending an account
334
Don't remove the @ part of my comment
152
Tell the user who will be notified of a comment
185
Every "close" has its thorn: replace "close" with "on hold" for the first five days
544
How to avoid "Hot Network Questions" on the sidebar