I don't know Hans Passant, but he's the 5th highest rep user on SO, and I'm sure that's no fluke. He clearly is very active and knows what he's talking about.

His answer to the question at VB.NET - Interrupt form loop and end form did not satisfy the OP. He asked for the answer to be accepted and the OP declined. So what?

In steps Reddit. Someone made this post linking to an image of the "offending" comment (image at http://i.imgur.com/lKr4L.jpg, comment has been deleted in what I assume was an attempt to end the onslaught of downvotes).

This reddit is the top post on /r/programming, which is read by quite a few people. Hans got -70 votes (he just deleted his answer), a mediocre question got 26 upvotes, and a mediocre answer got 41 upvotes.

Is this fair? Is there anything we can do to restore some of Hans's lost rep, or right the balance of the SO universe? It seems like the users who engaged in mob behavior abused their ability to vote down.

I'm not going to defend the overall hostility of the comments, which Hans has already apologized for, but one thing bears mentioning, and that is that several people here seem to have thoroughly misunderstood the meaning of one his comments.

People, please, if you don't know what an idiom means, look it up instead of guessing:

to accept the unpleasant results of something you have done | pay the price
After fooling around for most of the semester, now he has to pay the piper and study over vacation

There is no way, no how, that he actually meant "accept my answer" by "pay the piper". It just doesn't make idiomatic sense. And considering that the top-voted answer in this question thread uses precisely such an interpretation, it's indicative of the fact that several people got the wrong idea.

It's plain as day to me what he actually meant. The comment meant, "If you insist on doing this the wrong way (using DoEvents to mimic an asynchronous task) then you have to deal with the negative consequences (requiring extra code to stop the task or else having the application hang). That's it. And speaking as a Winforms developer of... many years, I can attest to that being completely, 100% correct.

Again, I'm not defending the overall tone of those comments or the answer itself, but the assumption people seem to be making here - that he was demanding his answer be accepted before he would offer any more help - is completely and unequivocally wrong.

Pretty sure that a lot of the reddit folks weren't familiar with the expression either and downvoted on the same wild and false assumption.

IMHO, he should not bug the OP to accept the answer. SO is a place where knowledgeable and experienced people help out others in need. If you answer it in a way that it creates another question, then the answer is not good enough. So, if the answerer does not want to give more detail to his answer, no problem, it's all voluntary.

BUT, he should not bug OP to accept answer. There is a line between being politely asking to accept the answer and rudeness, which the answerer somehow crossed. It can be asked politely but not in the way "You have to pay the piper. Your loss, good luck sorting this out by yourself."

And yes, once you are on Reddit for wrong reasons, expect the s**t to hit the fan.

Developer Art thinks I should apologize and I agree. I am deeply sorry for posting such a horrible and insensitive comment. This is not something I normally do, I almost always try to work with the questioner to get to a resolution, often through a long comment trail. Yesterday was not a great day, I'd like to forget it soon and hope everybody will let me.

Having one of the lowest downvote rates of the top users at SO is something I hold dear and I will remember to not again put that in jeopardy. Kindly focus on my achievements at SO instead of the one-time stupid slip-up of a crabby and tired contributor. And my personal apology to Phil. In the end he got an answer that was helpful to him, I trust that this restores his confidence in SO as a place to get help, my regrettable behavior not withstanding.

To be clear, I don't support mob justice, but there was some validity to the complaint in this case. 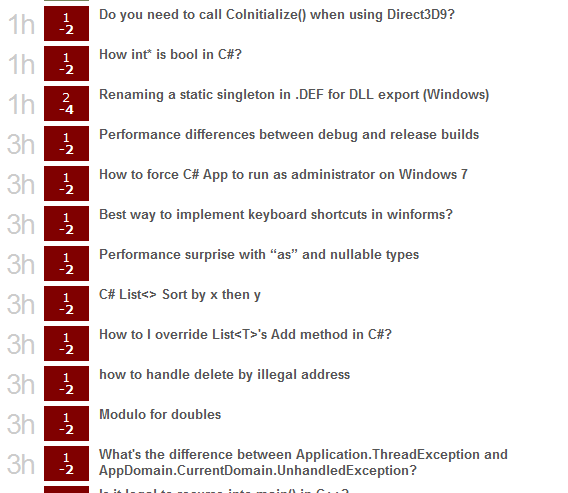 The first two steps are ok. The third was wrong, and the fourth is the community's existing solution to the problem of mob downvoting.

In other words, the system handled both problems beautifully.

I just looked at the screenshot at reddit and what... people I'm just shocked.

Clearly that large figure got into his head. You just don't do things like this.

That's not just arrogant and rude, it's offensive and insulting. That probably touched the OP deeply. How deep is shown through this reddit post - not a light wound. And that I can understand.

While I'm earning much reputation I question it even more every day: "Do I really deserve it?". The more I get the more humble I learn to be for I learn more of how much I don't know.

That's the thing Hans could also try - being humble.

The comments were extremely arrogant and unbecoming of a user with that much reputation. Clearly it shows that those numbers mean nothing. As the primer says, reputation is a reflection of one's communication skills - hardly in this case.

The attitude is a reason enough not to hire that guy - even with 130K worth of reputation.

And what bugs me most in the whole story, is that after all Hans didn't even come to the idea of... apologizing to the guy. Saying something like "Sorry it was a bad call on my side, don't know what came up on me, I'm truly sorry, please come back to SO and I will help you and provide assistance to the best of my abilities". That would be the right thing to do. But it never happened. And that not doing alone says more of the person than those initial comments.

As to restoring the reputation lost in the mob action - I would recommend to Jeff to cut that rep in half - 50% off for the improper behavior and for the loss of SO reputation out there. A lesson needs to be taught.

After Hans had made a populist move to sort of apologize, here's a fresh word from our "Most tactful": 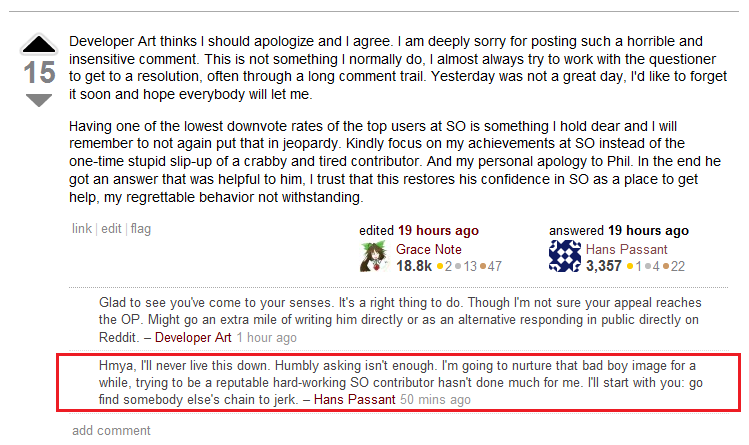 Hans, you do need professional help. Stop wasting time on SO and use time to take some basic social skills lessons. You sure need them.

Not the answer you're looking for? Browse other questions tagged discussion down-votes high-rep-users reddit .

32
Mitigating publicity-driven vote inflation
20
Show whether a question was “reddited”
-7
Proposal to solve the Uncommented Downvote problem
15
Policy on reputation abuse from vindictive redditor trolls?
11
Removed accepted answer… what about the reputation?
12
Any way to fix the vote disparity between poll questions and regular questions?

29
Can we report / do anything about a persistent troll?
0
How do you deal with a person that is repeatedly offending you?
18
Handling low-quality questions from low-rep users
27
Why does the Stack Exchange network not have a thumbnail image when a question/answer is posted on Reddit?
37
Getting downvotes after I flagged an answer by a high rep user
4
Regression of behavior on removal of downvote to 1-rep user's question
324
Stack Overflow is getting a Meta of its own
45
Work is hard, let's color the walls
15
On frustration provoked by questions where the answer is “that's not possible”
38
Is this user advertising his product acceptable?