Currently, it appears that you can't see the vote totals on nominees during the primaries if you don't have enough reputation to vote: presumably, that's because the voting widget is disabled.

It would be great to be able to see how the election is doing as a spectator. In case it isn't clear, as it stands now, voters while voting get to see vote tallies: I'm requesting people who aren't voting be given that same information. For transparency and/or idle curiosity.

I'm interested in providing the same level of information for voters and non-voters alike, but if you're interested in getting rid of the tallies for voters entirely, you'll want to see the request: Do not show the score for users during primaries. 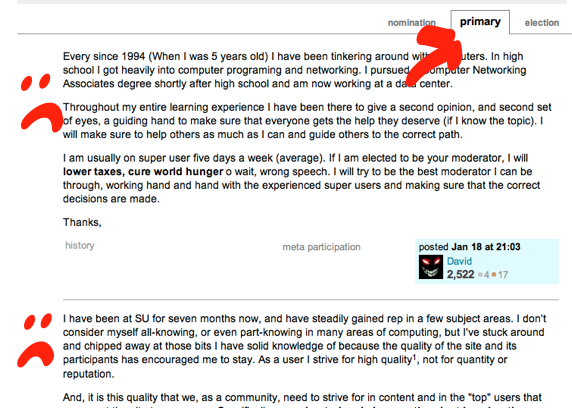 852
Can we have the ability to retract a close vote before it closes?
860
Allow an edit to notify downvoters: "I think I've fixed the issue now - please check"
59
Do not show the score for users during primaries
14
Total number of voters in the primaries?
17
Proposal for Amendments to the election primary
91
Allow another close vote after retraction
72
Comments on moderator nomination statements should be more visible in all stages of the election
274
Let's disallow moderator nominations from people who've been suspended in the past year
25
Allow us to rank all the candidates in a moderator election
59
Improve election schedule with respect to the questionnaire